Adjusting the side door GAZ-2705

To replace the bearing assembly of the upper 5, middle 1 and lower 9 guides, the middle mechanism 13, the side door should be removed.

- remove the plug from the middle guide;

- move the door to the cutout in the upper guide and disengage the roller from it (to avoid damage to the body and the door, this operation must be performed by two people);

- tilt the door to disengage the roller of the lower mechanism; 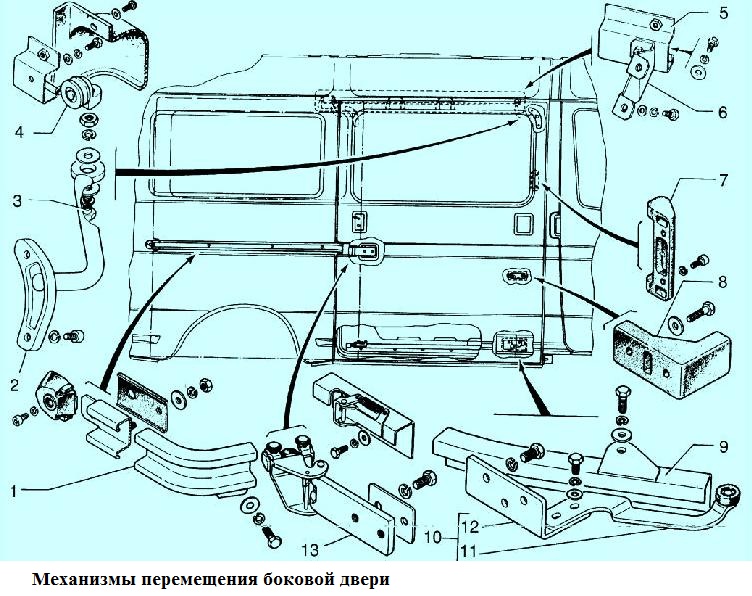 Install the door in reverse order.

Install the door trim after adjusting the door setting.

Adjustment of the installation of the side door is designed for the reliable operation of its mechanisms, which ensure the movement, closing - opening and reliable locking of the door. 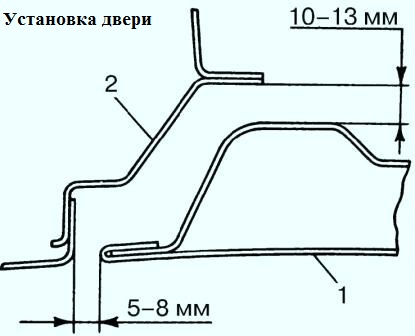 - along the internal rebate gap between the sidewall and the door 10-13 mm.

The door is adjusted in the vertical direction by moving the roller with the carriage 4 of the upper mechanism 2 along the thread of axis 3, as well as the middle 13 and lower 10 mechanisms up or down.

The door is adjusted in the direction of travel by shifting the axis 3 of the carriage of the upper mechanism 2 in the head of the lever, as well as the middle 13 and lower 1 0 mechanisms forward or backward. 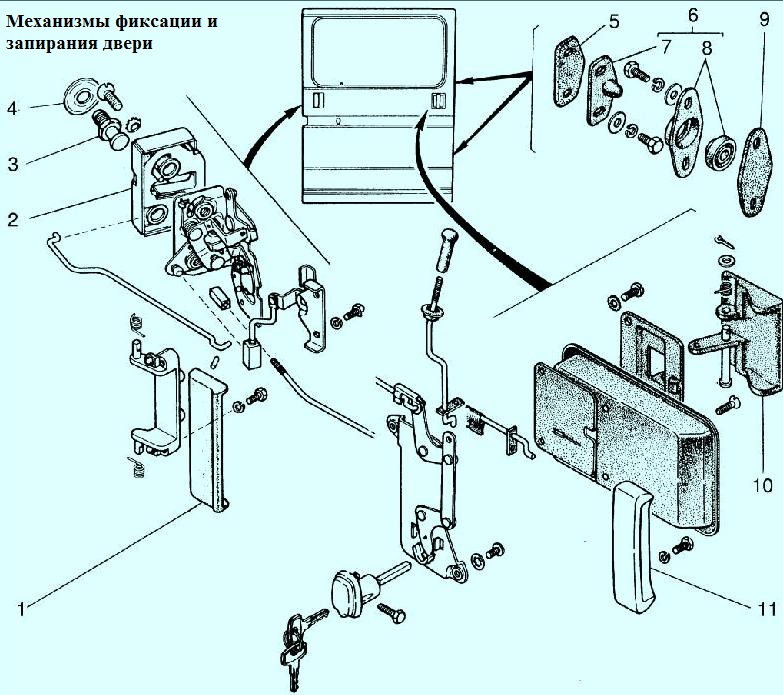 Fixation and locking of the door in the sidewall opening is provided by:

- on the front end of the door with two clamps 7;

- on the rear end of the door with spike 3 and locking mechanism 2.

To determine the number of pads:

- install evenly (the difference is not more than 1 pc.) gaskets 6 and 10 under the stud and retainer body.

To adjust the engagement of the stud 3 with the locking mechanism 2 along the rear end, move the stud 3 on the sidewall (it is allowed to additionally place a washer 4 under the stud, but no more than 2 pcs.).

After making all the necessary adjustments, it is not possible to remove the door without using a cutout in the upper track.

In the closed position, the door must be firmly fixed in the front opening on two latches 7 and locked with a locking mechanism 2 on the spike 3 in the rear opening of the sidewall.

The moving parts of the mechanisms (the upper roller bearing 4, the thread of the axis 3 of the upper carriage, the axles of the guide rollers of the middle mechanism 13) must be lubricated with Litol-24, LITA or TsIATIM-201 grease.

It is strictly forbidden to operate a car:

- with open or locked only to protect spruce tooth cam door lock;

The door closes poorly in the end position

Uneven gaps between body side and door

Incorrect adjustment of the door installation - Make the necessary adjustments

You can also see the article - "Removing, installing and adjusting the sliding door of a Gazelle car"