Schemes for switching on turn indicators are shown in fig. 1 and 2. The sidelights and taillight are switched on by a switch of type P105 on a GAZ-53A car and P118 on a GAZ-66 car

The operation of the switches is checked using control lamps according to the diagrams shown in fig. 1 and 2.

In the off position, lamps 4 and 5 should be lit. When the right turn of the lamp 4 and 6 is turned on, and when the lamp 3 and 5 are turned left. 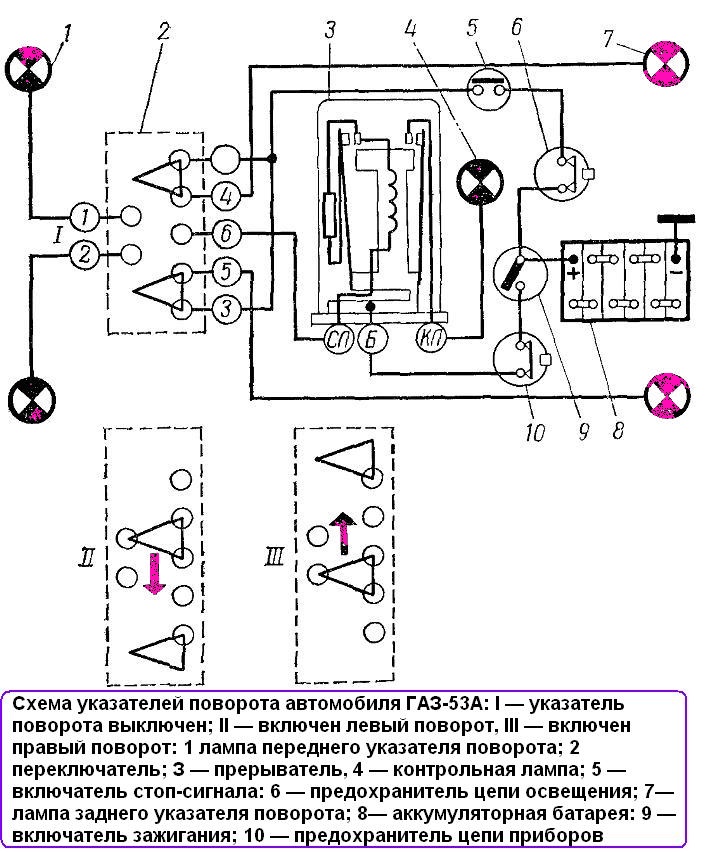 If the switch on the GAZ-53A car does not turn off after the car exits the turn, adjust the switch position.

To do this, loosen the two screws securing the switch to the bracket and move the switch to ensure that the rubber roller does not touch the steering wheel hub in the off position (there should be a gap of 2 - 2.5 mm). 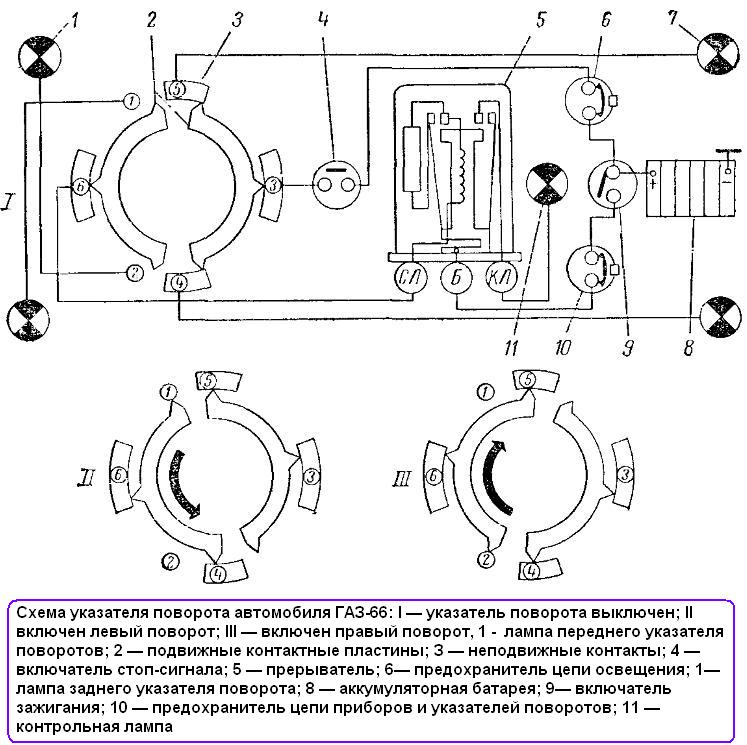 When the switch is turned on, the roller must be firmly pressed against the wheel hub.

After every 25,000 km of the car's run in the P105 switch, lubricate the roller axle, the lever axle and the lever plate that presses the roller.

Let's consider in more detail the design and operation of the turn signal light:

The most widely used are turn signals with an electromagnetic thermal current interrupter - PC57, PC57-B, designed for 12 V, and PC401 - for 21 V.

Turn indicator device. A winding consisting of 50 turns of PEL wire with a diameter of 0.75 mm is placed on the steel core 9 (Fig. 3). The core is rigidly connected to the bracket 11.

The circuit breaker winding is connected in series with signal lamps 16 or 17 located both in the rear light and sidelight, and when using PC57 B, with a control lamp 12 located on the instrument panel in the driver's cab.

Steel anchors 4 and 10 are welded to the core 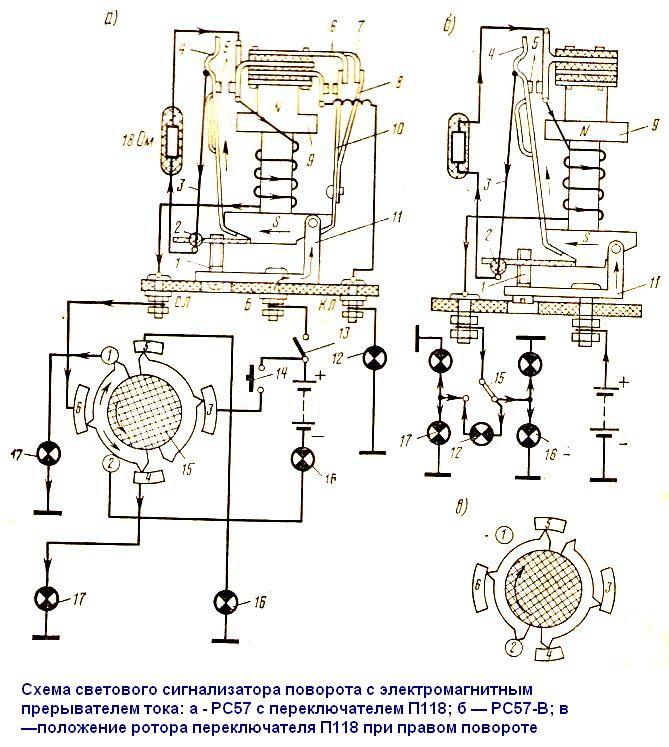 The lower end of the string 3 passes through the glass bead 2 and is thickened by solder welding. The bead isolates the string from the bracket.

Resistor with a resistance value of 18 ohms, made of a nichrome conductor.

If one of the signal lamps burns out, the current decreases, as a result of which the lamp flashing frequency increases significantly, and in the circuit with the PC57 relay, the control lamp does not turn on.

When the signal lamps are turned on, the current from the battery will pass through the ignition switch 13, armature 4, string 3, resistor, winding, switch 15 and to the lamps (see Fig. 3).

The path of the current in the diagram is indicated by arrows. The glow of the threads will be small.

The current passing through the string 3 will cause it to heat up, as a result of which the string will lengthen and its tension will decrease.

At this time, the steel armature 4 will be attracted to the core of the electromagnet and the contacts 5 of the breaker will close.

Closed contacts 5 shunt the resistor and string 3. The current strength in the lamp foam will increase and their filaments will glow with full heat.

The interruption of the current in the string is accompanied by its cooling and a decrease in length.

The string is tensed again and the contacts open, after which the process is repeated. The vibration frequency of the contacts is 60 ÷ 120 openings per minute.

The periodic closing and opening of the circuit of the control lamp 12 in the PC57 is ensured by the operation of contacts 6.

At the moment of closing contacts 5, the current strength in the electromagnet winding increases, therefore the core is magnetized more strongly and, by attracting the steel armature 10, ensures the closing of contacts 6.

In this case, the control lamp turns on at the full voltage of the current source and burns with full heat.

After contacts 5 open, due to a decrease in the current strength in the electromagnet winding, the magnetization of its core decreases, and then, under the action of an elastic bronze plate 8, contacts 6 open and turn off the control lamp circuit.

The electrical circuit of the control lamp in the PC57-V deputy hovering through two unlit lamps.

Since the test lamp has a high resistance, the current strength in the circuit of signal lamps connected in series with the control lamp will be small and the glow of the signal lamp filaments will practically not be noticeable.

The test lamp is low wattage and will therefore work normally. The electric circuit of the lamps is switched on only when the ignition switch 13 is on.

In the neutral position of the switch handle, the right contact plate of the rotor closes terminals 5 and 4, which allows the stop lamps to be turned on when the stop lamp switch 14 is turned on.

On most vehicles, the turn signal indicator is automatically turned off by special devices when the steering wheel is returned to its original position after turning the vehicle.

On cars of Minsk and Kremenchug plants, where 24-volt equipment is used, an electromagnetic circuit breaker RS-401, made on the basis of RS57, is installed.

In these breakers, the cross section and number of turns of the winding have been changed, the resistor has a resistance value of 38 ohms, and to reduce the oxidation of the main contacts, a 105 pF capacitor is connected in parallel with them.

Main malfunctions of the turn signal.

The most common malfunctions are: 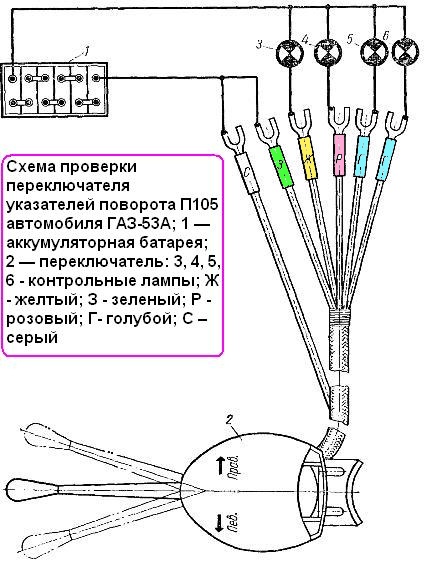 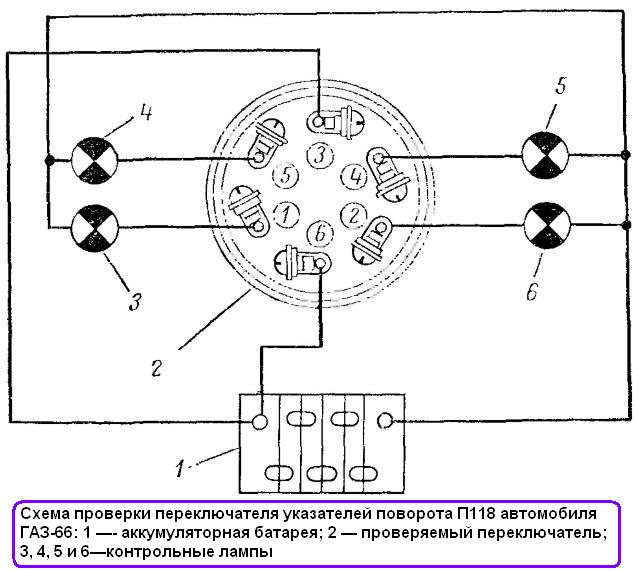 The current breakers are adjusted according to need with screw 1 (see Fig. 3).

To reduce the frequency of lamp flashing, screw 1 is unscrewed.

By bending the brass bar 7, the tension of the spring plate 3 is adjusted, and at the same time, the operation of the control lamp changes.

The operation of the direction indicators is checked with a test lamp.

When the filament of the lamp in the sidelight or tail lamp burns out, the blinking frequency of the indicator lamp increases sharply. If damaged, replace the breaker.