Scheme and elements of the GAZ-2705 carburetor

The K-151D carburetor, installed on a car with a ZMZ-4063 engine, has two adjacent vertical channels (chambers) for air passage, in the lower part of each of which a rotary throttle valve is installed

The throttle actuator is designed so that as you press the accelerator pedal, first one and then the other damper opens.

The chamber in which the throttle opens first is called first, the other is called second.

In the middle part of each of the main air channels there are cone-shaped constrictions - diffusers that create a vacuum in the air flow necessary for sucking fuel from a special container located in the carburetor body - a float chamber.

The fuel level in the float chamber, necessary for the normal operation of the carburetor, is maintained by a mechanism with a float and a needle valve.

The carburetor float mechanism is completely (together with the needle and float) located in the carburetor body and is available for visual inspection after removing the cover (the fuel level in the float chamber can be measured without removing the float). 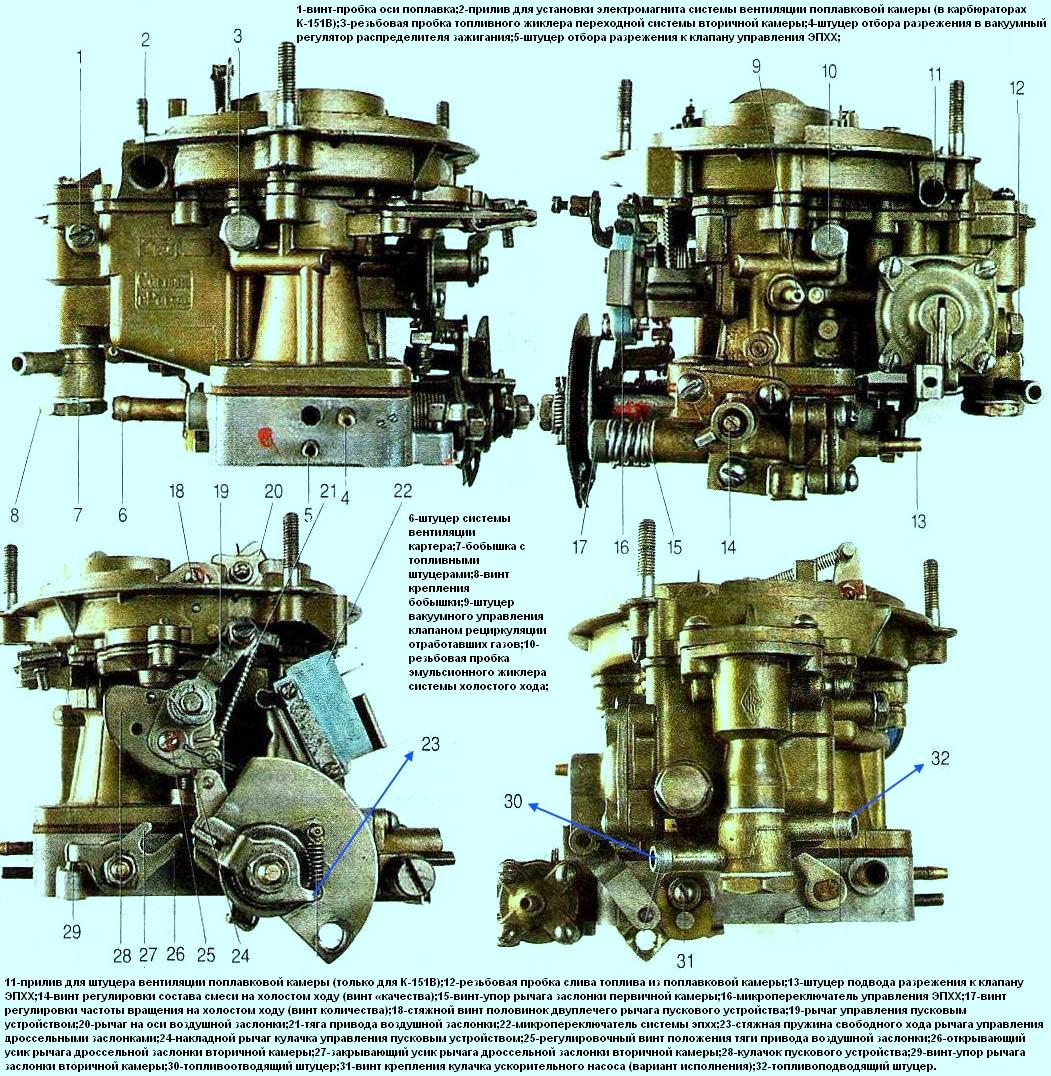 The carburetor consists of three main parts: the top - housing cover, with a flange and studs for fastening the air filter housing, with a float chamber ventilation device and starter parts.

The cover is fastened with seven screws to the carburetor body through a cardboard gasket;

lower - throttle bodies, with throttle valves and their drive mechanism, as well as an idle device attached to the carburetor body from below with two screws through three gaskets (two thin - cardboard and one thick - plastic).

The carburetor has the following systems, devices and mechanisms:

main dosing systems of the first and second chambers;

economizer valve for shutting off the fuel supply in the forced idle mode (EPKhH); 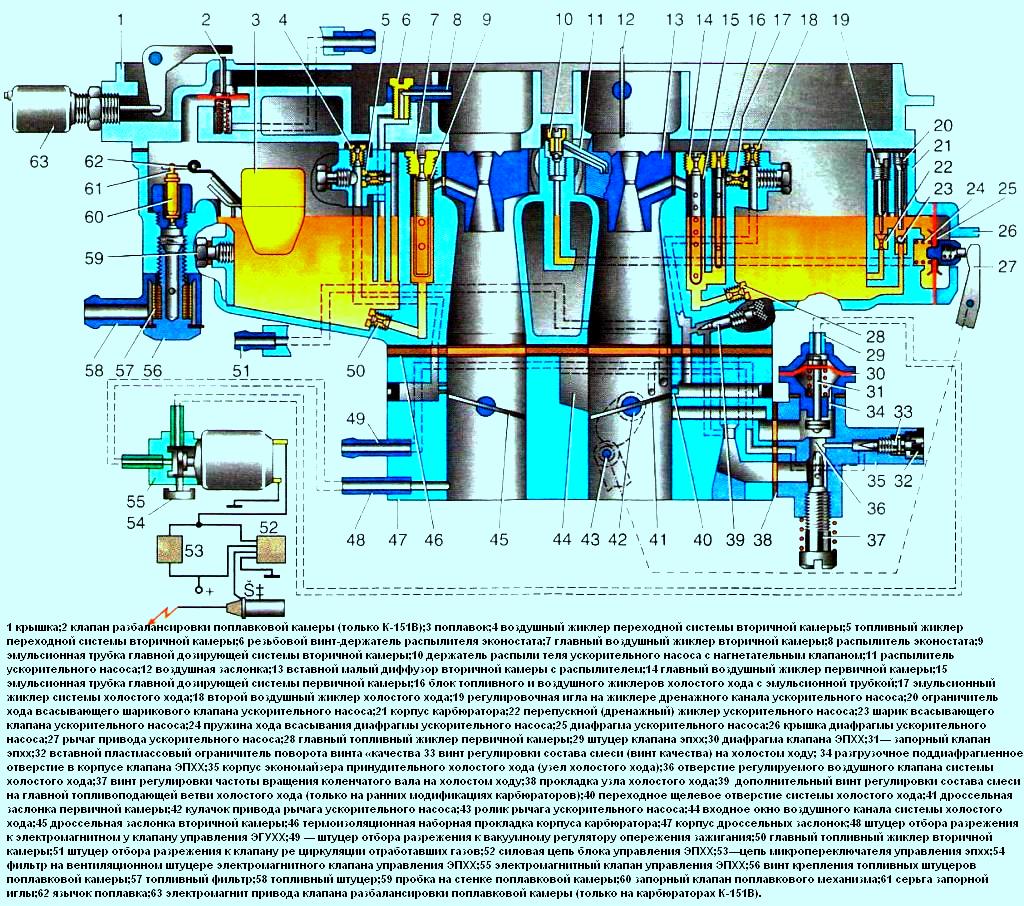 The idling system is autonomous, with mixture composition control.

An ecostat is provided in the second chamber to enrich the combustible mixture at full load.

The starting device is of a semi-automatic type, it consists of a pneumatic corrector, a system of levers and an air damper, which is closed before starting a cold engine using a manual drive.

At the moment the engine is started, the pneumatic corrector, under the action of the vacuum that occurs in the intake pipeline, automatically opens the air damper to the required angle, ensuring stable operation of the engine when warmed up.

The fuel cut-off system (forced idle economizer) comes into operation in the forced idle mode when the vehicle is braked by the engine, when there is no need to supply fuel to the engine.

This ensures fuel economy and reduces the emission of toxic substances into the atmosphere.

Flushing and cleaning the carburetor

Flushing the carburetor, unlike washing other units, is as important a means of maintaining the performance of the carburetor as adjusting it.

The principle of operation of the carburetor, based on the movement of fuel and air in narrow channels, determines the need to constantly maintain cleanliness both inside and out.

Oil deposits on the outer surface of the carburetor have no effect on its operation as they cannot get inside, but a thick layer of dirt on the linkage can impair the mobility of the levers and rods.

In this case, as well as before disassembling the carburetor, even partial, its outer surface must be washed.

But remember that with each wash, even the most thorough one, an additional amount of abrasive and sand gets into the worn-in rubbing pairs of the lever mechanism, so we do not recommend washing the carburetor too often. For the same reasons, it is better not to lubricate use the linkage.

You can use unleaded gasoline, kerosene or diesel fuel for external cleaning of the carburetor.

For reasons of fire safety, however, it is preferable to use special detergents in aerosol packaging, which are washed off with water along with dirt.

After washing, blow the surface of the carburetor with compressed air.

The internal cavities of an undisassembled carburetor must not be blown with a strong jet of compressed air, as the float mechanism may be damaged.

Wash the internal surfaces and parts with the same liquids as the external ones.

But since gasoline and kerosene poorly dissolve varnish deposits in air channels and jets, it is more efficient to use solvents of grades 646-649, acetone, dichloroethane, amyl acetate and various alcohols.

Do not wash an unassembled carburetor with solvents, acetone, dichloroethane, etc.

If accidentally ingested, they will dissolve the polymer and rubber materials from which some gaskets and diaphragms are made, and the carburetor will fail.

For the same reason, when washing a disassembled carburetor, remove these parts and wash them separately only in gasoline.

Recently, the so-called "Carburetor Cleaners" in aerosol packages have been widely used.

These high-performance compounds containing a complex of strong solvents and detergents, according to the instructions, are supposed to be injected directly into the carburetor by removing the air filter cover.

But use them very carefully and only in cases where you need to urgently start an engine that has stopped due to excessive contamination of the carburetor.

With excessive accumulation of dirt in the carburetor and a large portion of the cleaner, the dirt is loosened and instantly clogs all air and fuel channels, as a result, a satisfactorily working carburetor will require complete disassembly for a thorough flush.

In addition, in a carburetor that has been working for a long time, leaks in the connectors that have arisen over time are gradually clogged with dust particles, which in this case play the role of an additional seal.

The cleaner will wash out these particles, and the normal operation of the carburetor without replacing the gaskets and seals will be impossible.

For this reason, it is best to use this highly effective disassembled carburetor cleaner.

Always strictly follow one of the main rules of washing the carburetor - never wipe the washed parts, especially the jets, even with a completely clean rag.

Even a barely visible lint, for example, getting into the fuel jet of the idle system, will completely cut off fuel supply and stop the engine. After washing, dry the parts only by blowing with a strong jet of compressed air.

For the same reason, do not use a rag to remove sediment from the bottom of the float chamber. It, along with gasoline, must be carefully pumped out with a rubber bulb.

If the first attempt fails to remove all sediment, add clean gasoline to the float chamber and repeat the operation until the bottom of the chamber is completely clean.