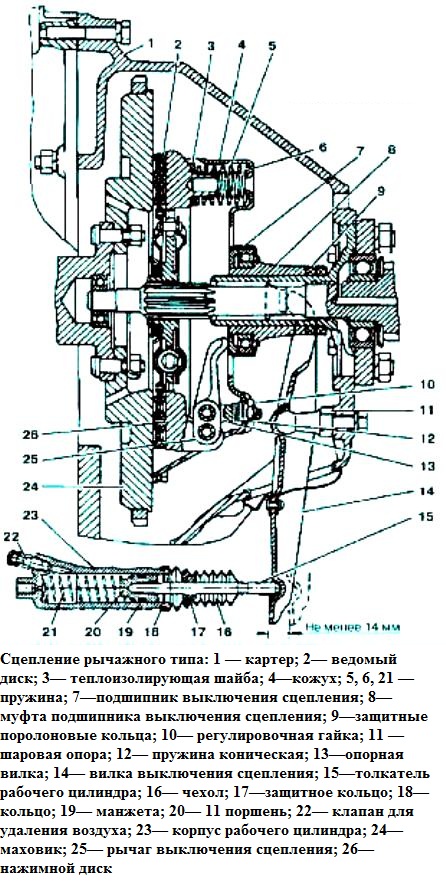 Clutch cover 4 is fixed to the crankshaft flywheel with six centering (special) bolts.

The force of nine double pressure springs 5 ​​and 6 creates the necessary friction force on the surfaces of the friction linings and ensures the transmission of torque from the flywheel through the casing and pressure plate 26 to the clutch disc and the gearbox input shaft.

The clutch drive plate is factory balanced with the crankshaft and flywheel of the engine, so when removing and installing it, it is necessary to align the marks ((0)) on the flywheel and clutch cover. 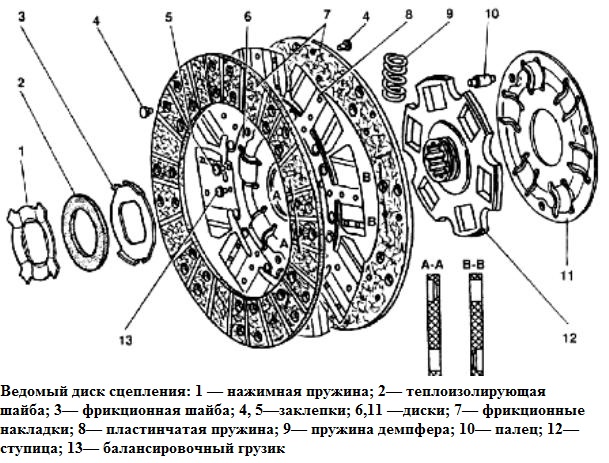 The clutch disc is equipped with a friction damper, consisting of a steel friction washer 3, sitting on the flats of the hub 12 and sandwiched between the disc 6 and the heat-insulating washer 2.

Vibrations are damped due to friction between these parts when disk 6 with friction linings rotates relative to the hub.

The outer diameter of the friction lining is 225 mm, the inner diameter is 150 mm, the thickness of the lining is 3.5 mm.

The clutch release bearing and the bearing clutch contain special lubricants that do not require replacement during the entire life of the vehicle. 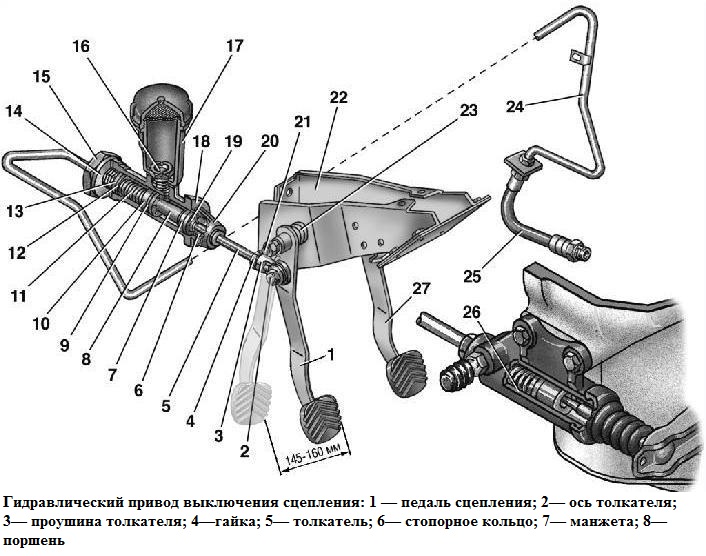 It is necessary to check and top up, if necessary, the liquid in the reservoir of the working cylinder.

In these cases, it is necessary to bleed the hydraulic drive, replace the cuff or flush the cylinder.

The degree of wear of the friction linings can be judged by the distance between the flywheel and the pressure plate when the clutch is engaged.

If this distance is less than 6 mm, then it is advisable to remove the driven disk for inspection and replacement of friction linings.

It is recommended, if possible, to replace the driven disk assembly with overlays.

It is advisable to check the distance between the flywheel and the pressure plate after 60,000 km.

To carry out measurements, it is necessary to install the car on an inspection ditch or lift and remove the lower stamped part of the clutch housing.

Removing, repairing and installing the clutch

For repair work, the clutch can be removed from the vehicle without removing the engine. to do this, the car should be installed on a flyover, lift or inspection ditch.

To remove the clutch you need:

To remove the hydraulic drive from the vehicle, you must:

When dismantling the clutch cover assembly (if there is no special tool), you must: 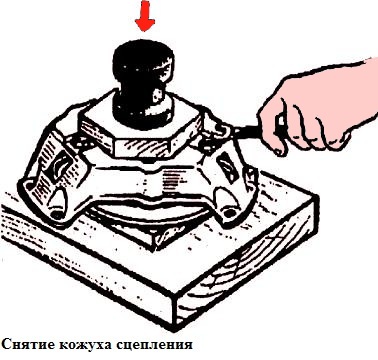 Place a wooden block on top of the casing so that it does not cover the three nuts that secure the support forks of the clutch release levers.

By pressing on the upper bar, compress the springs and unload the clutch release levers from the forces; 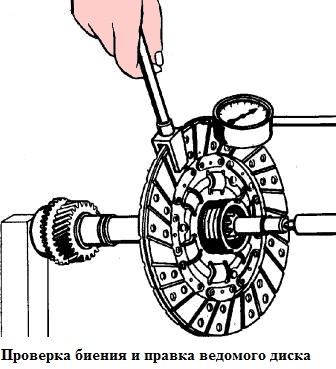 A driven disk with new linings must be checked for runout of the friction plane.

The runout of the disc linings, measured at the edge of the disc, should be no more than 0.7 mm.

Then the disk must be statically balanced using special balancing weights that are inserted into the holes of the driven disk plate and riveted.

The number of weights should be no more than three. The heads of the weights must be located on the side of the friction damper.

The admissible imbalance of the driven disk should be no more than 10 gsm.

The assembly of the casing with the clutch pressure plate is done in the reverse order of disassembly.

In this case, it is necessary to make sure that the marks made during disassembly on the casing, pressure plate and levers match, and the pressure springs are centered on the casing flanges.

In order to prevent the needles from falling out of the holes in the levers, it is necessary to install rubber balls with a diameter of 85-8.0 mm or generously lubricate the needles with grease.

Pressure springs must be installed only with the required load and one group in order to avoid distortion of the pressure plate and to create the necessary pressure force.

After assembly, adjust the position of the release levers. If there is no special tool, the indicated operation can be performed using the removed flywheel.

In this case, the pressure plate, assembled with the clutch cover, is installed on the working surface of the flywheel.

Between the pressure plate and the flywheel, washers of the same thickness - 8 mm are placed in three places.

While screwing or unscrewing the adjusting spherical nuts of the support forks, ensure that the size from the end of the flywheel to the end of each lever is (51±0.25) mm

After adjustment, caulk (penetrate) the metal of the shank of each spherical nut into the slot of the support fork.

Assembly of the hydraulic clutch release - in the reverse order of disassembly.

Before assembly, the cylinder mirror must be lubricated with castor oil or fresh brake fluid.

When assembling the master cylinder, it is necessary to check that the return spring easily returns the piston to its original position.

Next, you should check with a soft wire with a diameter of 0.3-0.5 mm whether the cuff overlaps the compensation hole.

The use of a master cylinder with a blocked compensation hole is not allowed.

When assembling the working cylinder, you need to make sure that the spring easily moves the piston in the cylinder.

Filling the hydraulic drive with fluid

Do not allow the fluid level in the tank to drop to more than 2/3 of normal during pumping and add fluid as needed;

It is impossible to add liquid released during pumping of the hydraulic drive into the reservoir of the main cylinder, as it contains air.