Features of the exhaust system of the VAZ-21114 engine

The exhaust system consists of an exhaust manifold made integral with the collector, additional and main mufflers and pipes connecting them 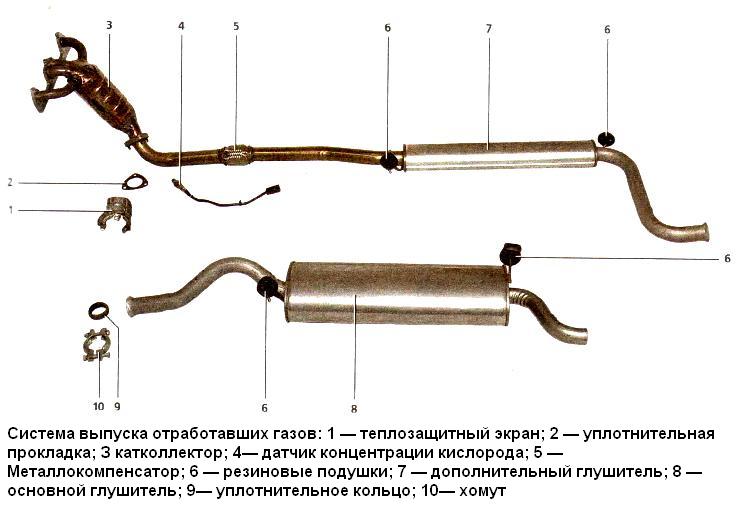 An oxygen concentration sensor (lambda probe) is installed at the top of the collector.

The diagnostic sensor is installed after the converter in the lower part of the collector. 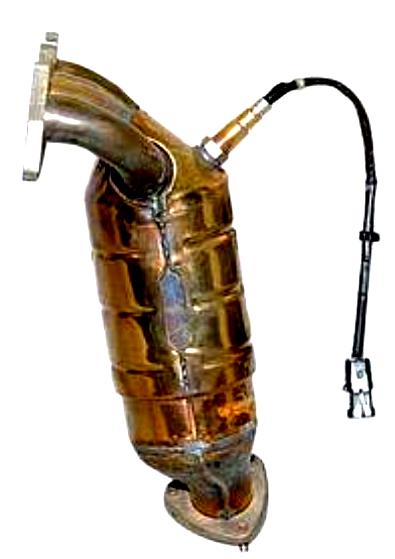 A catalytic converter is designed to reduce emissions of carbon monoxide, nitrogen oxides and unburned hydrocarbons.

The vehicle is fitted with a metal carrier catalytic converter. It consists of many honeycombs made of corrugated foil and coated with afterburner catalysts.

Passing through the neutralizer cells, carbon monoxide is converted into low-toxic carbon dioxide, and nitrogen oxides are reduced to harmless nitrogen.

The degree of gas purification in a serviceable converter reaches 90-95%.

For the normal operation of the converter, the composition of the exhaust gases (in particular, the oxygen content in them) must be within strictly specified limits.

This function is performed by the electronic engine control unit - a controller that determines the amount of fuel supplied depending on the readings of the oxygen concentration sensor.

If lead compounds are present in the exhaust gases, the catalytic converter and the oxygen concentration sensor will quickly fail.

Therefore, the operation of a car on leaded gasoline is strictly prohibited, even for a short time.

Also, a faulty ignition system can become the cause of the catalytic converter failure.

When sparking is skipped, unburned fuel, getting into the converter, burns out and cokes the cells, which can lead to complete blockage of the exhaust system and stop (or severe loss of power) of the engine.

The controller has a function to protect the catalytic converter against misfires that can be detected in one or two cylinders at the same time.

The controller at the same time turns off the fuel supply to these cylinders, and the engine management system malfunction indicator located in the instrument cluster lights up in a flashing mode.

In this case, you must stop driving, stop the engine, try to find the cause and fix the problem.

If this fails, the vehicle must be towed to the nearest service station.

Mufflers and the collector are non-separable units; in case of failure, they must be replaced with new ones.

An additional muffler pipe is attached to the collector on three studs.

The connection is sealed with a heat-resistant gasket.

A metal compensator is built into the pipe of the additional silencer.

It reduces the transmission of powertrain vibrations to the exhaust system.

Between their flanges is a metal ring with a spherical outer surface.

The inner surface of the flanges is also spherical, the flanges themselves are tightened with a clamp. On the body, above the additional muffler and metal compensator, heat-shielding covers are installed.

The exhaust system is suspended from the body on four rubber pads.

Maintenance of the exhaust system consists in its periodic inspection, checking for tightness of the connections and the presence of through corrosion, it provides for tightening loose connections.

To avoid burns, it is recommended to start work after the exhaust system has cooled down.

We perform work on a viewing ditch or overpass.

Disconnect the pipes of the additional and main mufflers. 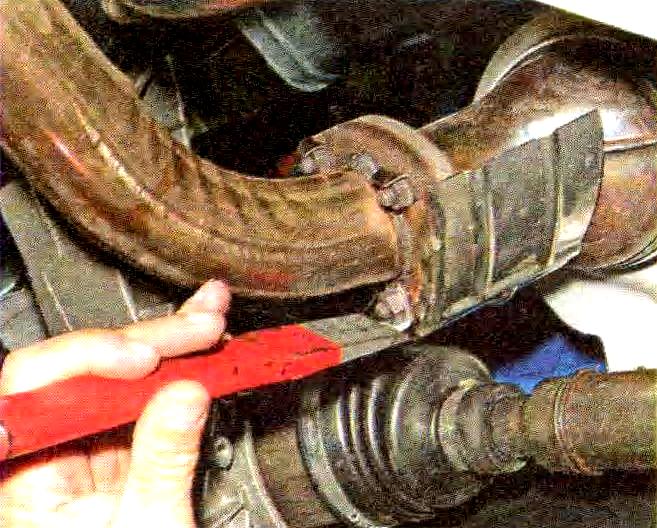 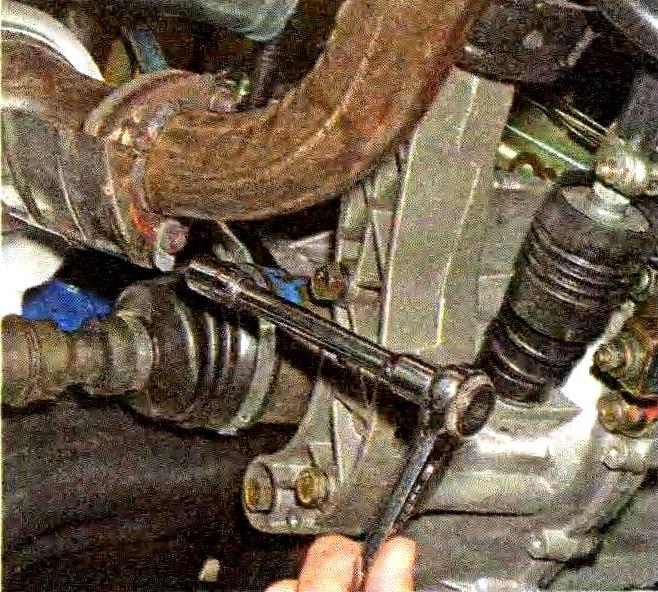 To separate the flanges of the pipe of the additional muffler and the collector with a chisel, we bend the edge of the lower nut locking plate and the edges of the heat shield that lock the other two nuts.

Using a 13 head with an extension, unscrew the three nuts securing the flange of the additional muffler to the collector flange 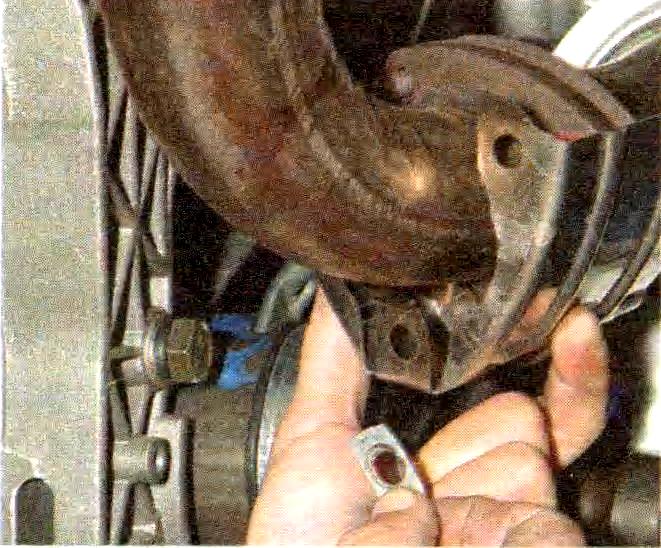 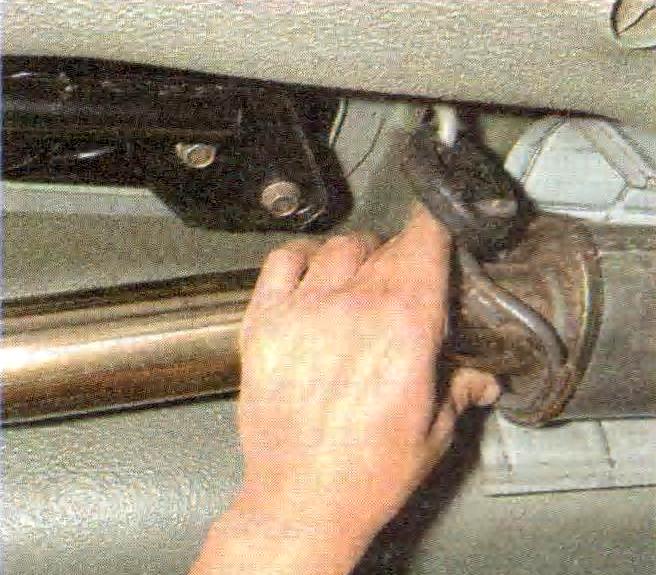 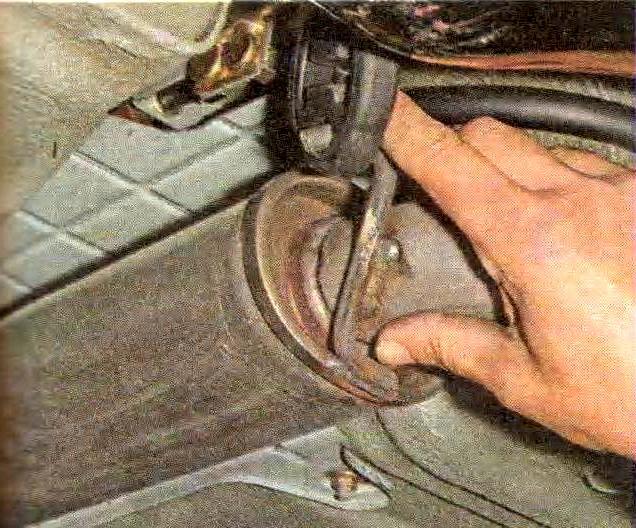 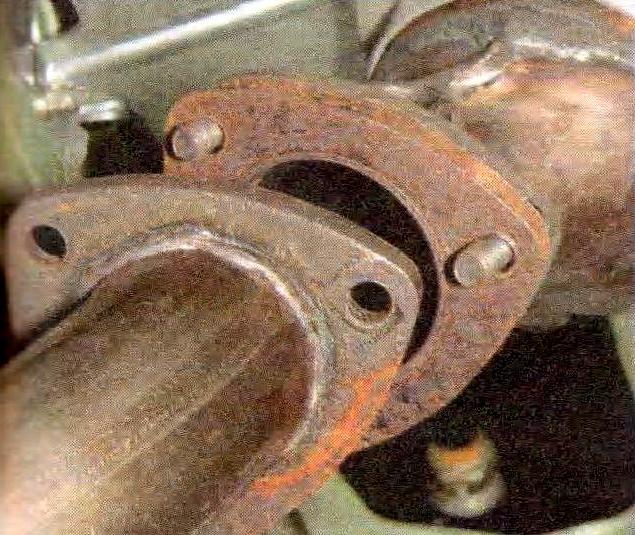 Similarly, we remove the rear muffler bracket from the rubber cushion 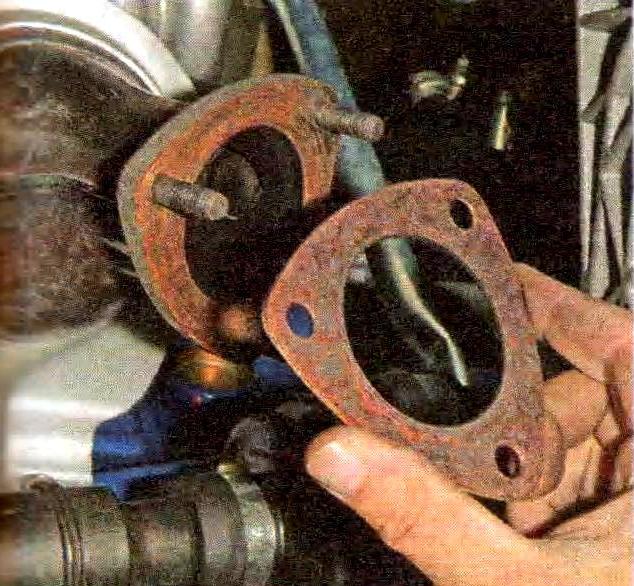 After each removal of the pipe flange of the additional muffler from the studs of the collector, the sealing gasket must be replaced with a new one.

Install the additional muffler in reverse order. After installation, lock the nuts for fastening the pipe flange and the collector by bending the edges of the locking plate and the heat shield. 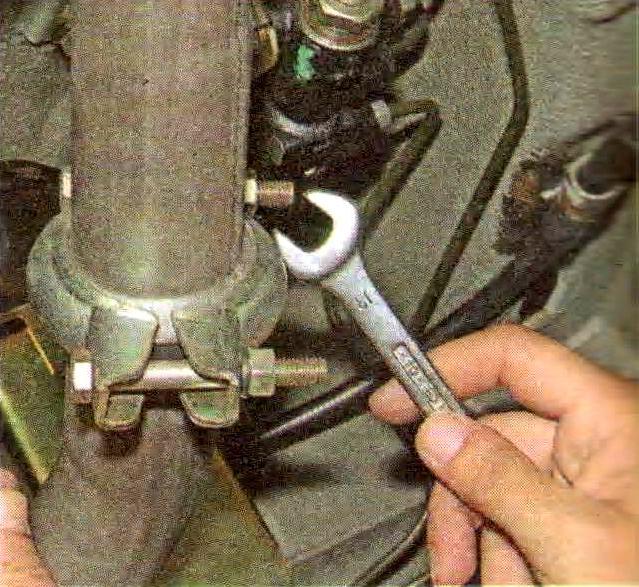 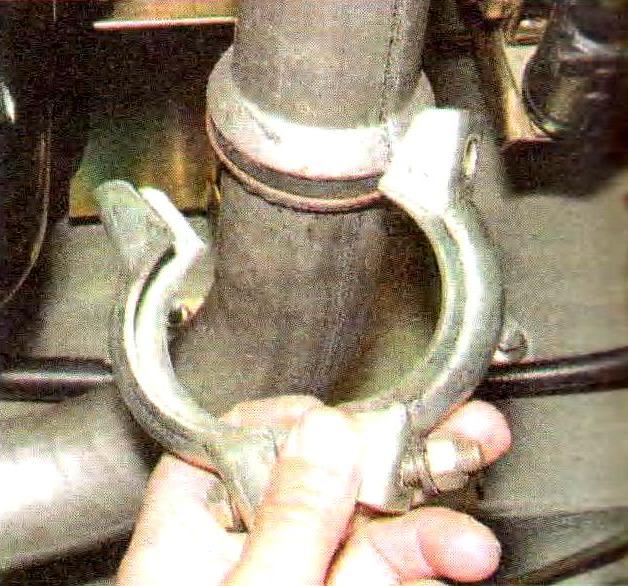 Using a 13 key, we unscrew the nut of the clamp bolt connecting the pipes of the additional and main mufflers 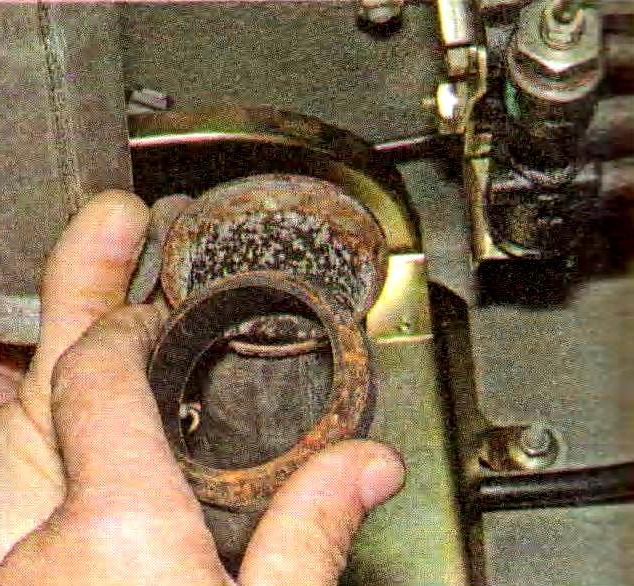 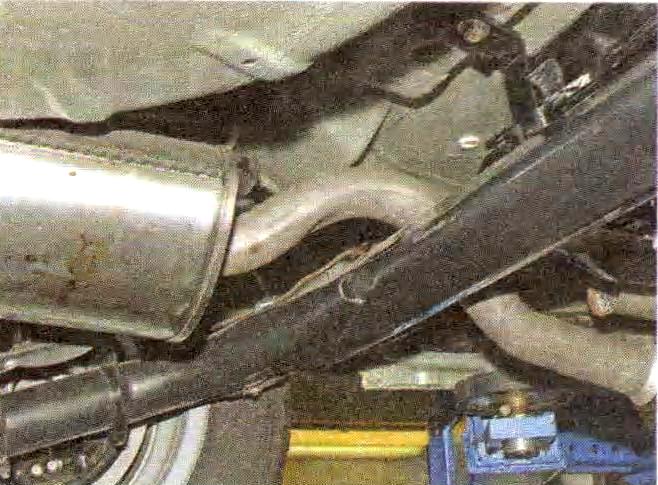 We take the pipe of the main muffler back, move it to the side and remove the sealing ring of the connection.

We lower the pipe of the main muffler onto the rear suspension beam. 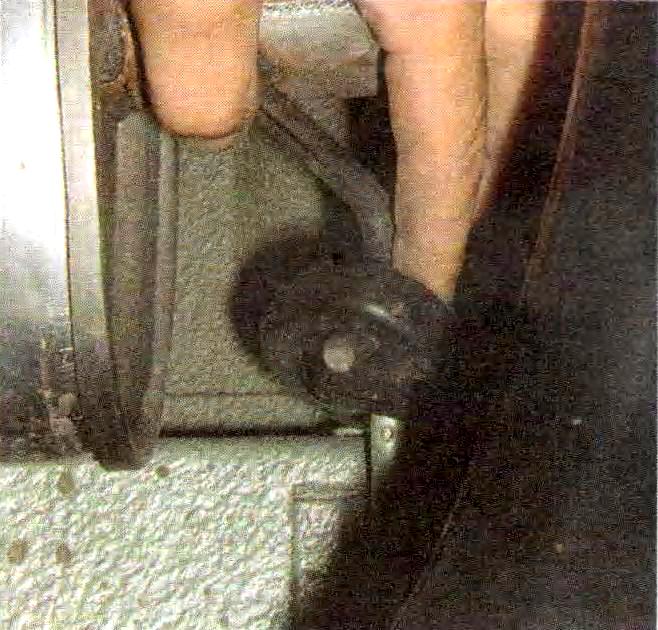 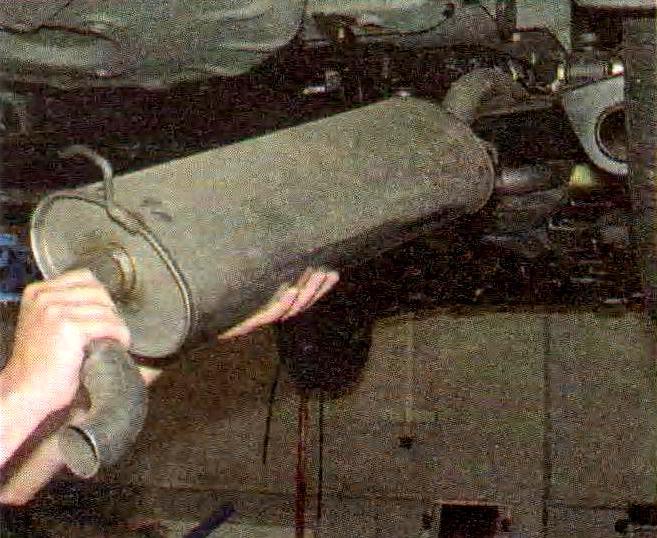 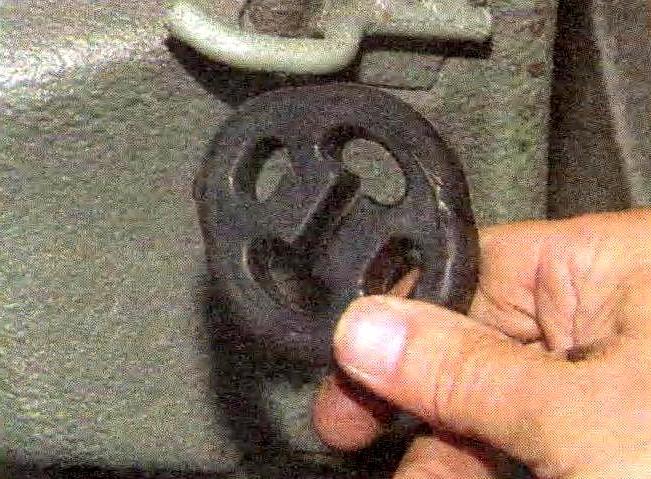 Remove the main muffler, bringing the exhaust pipe out from behind the rear suspension beam.

To replace the rubber cushion of the front suspension of the main muffler, remove the cushion from the body bracket. We replace the pillow with a new one. 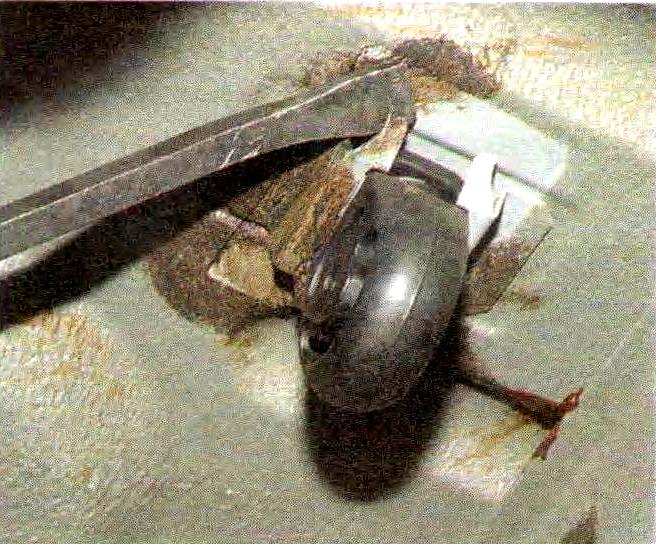 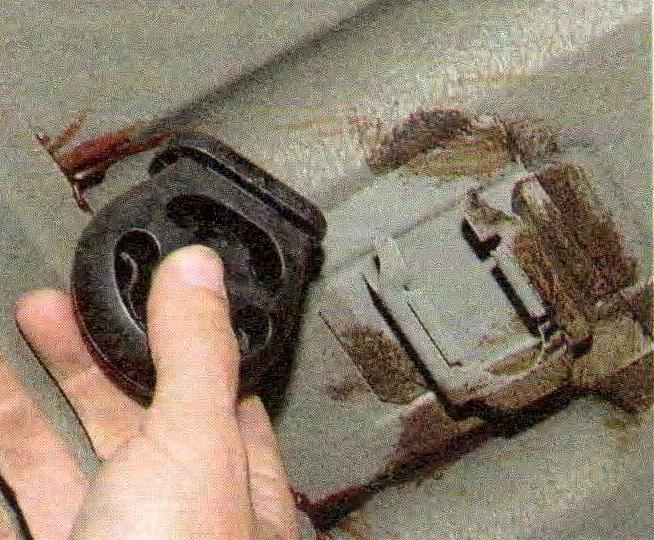 To replace the rear suspension cushion of the main silencer with a mounting blade, bend the mustache of the bracket welded to the body

Installing a new pillow. After installation, we bend the mustache of the bracket.

We mount the main muffler in the reverse order, making sure that the elements of the exhaust system do not touch the body elements during vibrations.