When repairing, the front axle beam must be checked for bending and twisting on the fixture (Fig. 1), which is installed on the spring platform

The determination of bending and twisting, as well as the angle of inclination of the hole for the king pin, is carried out on scales. to check the opposite side of the beam, the fixture is reinstalled. 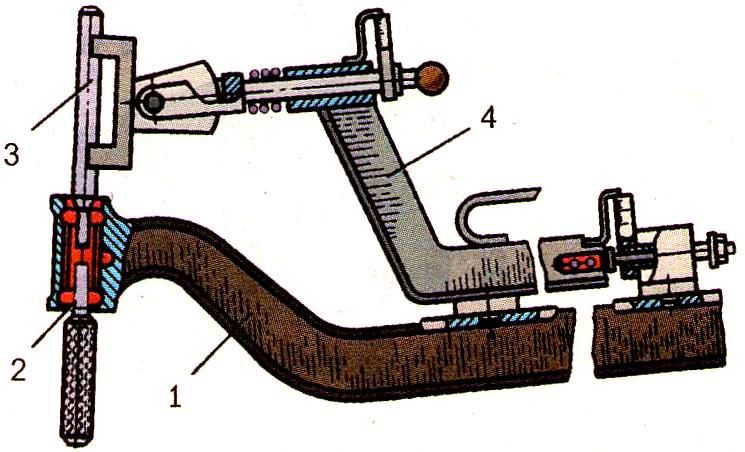 The beam is straightened in a cold state under a hydraulic press.

After straightening, the angle of inclination of the axis of the kingpin hole to the vertical axis should be within 7°45' - 8°15'.

The non-perpendicularity of the pivot hole relative to the spring pads should not exceed 0.5 mm.

The non-perpendicularity of the ends of the beam bosses relative to the holes for the kingpin is allowed no more than 0.2 mm.

If a beam is bent and cannot be straightened, it should be replaced.

If the steering knuckle eye is worn under the front axle beam in excess of the allowable size of 68.06 mm, it is recommended to process the worn surfaces and install compensating washers during assembly.

When the eye is worn more than 68.5 mm, the steering knuckle must be replaced.

Damage of the thread of the steering knuckles by more than two threads is not allowed.

It is recommended to press out the worn bushings of the steering knuckle and replace them with new ones. The pressing force of the bushings must be at least 10,000 N.

Steering knuckles with worn journals for bearings should be replaced.

The main dimensions of the front axle parts are shown in the table.