The gearshift mechanism of the divider is controlled by a pneumomechanical system (Fig. 1), which consists of a pressure reducing valve 4, a divider control valve 3, a divider switch-on valve 1 and air ducts

Air from the pneumatic drive of the vehicle brake system at a pressure of 620-750 kPa is supplied to the inlet of the pressure reducing valve 4, at the outlet of which a constant pressure of 395-445 kPa is maintained.

Pressure is regulated by gaskets mounted on the spring housing. 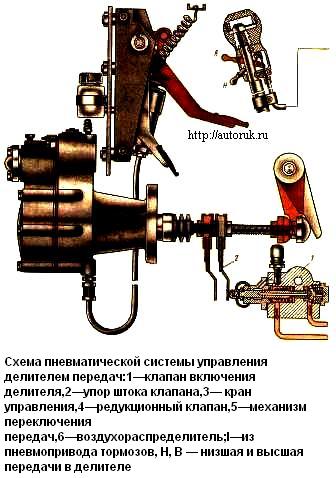 The valve 3 for controlling the divider, depending on the position of the spool, directs the air coming from the pressure reducing valve into one of the cavities under the piston of the air distributor 6 and moves its spool to one of the two extreme positions, thus providing air supply to the cavity A or B of the cylinder .

Pre-selection of gear in the divider is made by moving the selector lever to position B or H.

Air from the pressure reducing valve 4 enters under the cylinder piston through valve 1, which opens at the end of the pusher stroke, i.e. with the clutch completely disengaged, with stop 2 fixed on the pusher of the clutch pneumatic booster piston. 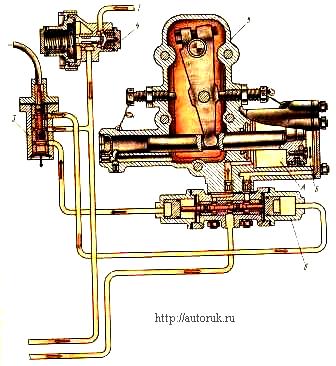 In fig. 2, the switch is in the low gear position, the valve stem 3 occupies the upper position, and compressed air is supplied through the upper pipeline to the air distributor 6 and moves the spool all the way to the left, holding it in this position.

At the same time, cavity A of the power cylinder communicates with the supply pipeline coming from valve 1 for switching on the divider, but compressed air does not enter there when the clutch is engaged.

To supply compressed air to cavity A, press the clutch pedal.

At the same time, the stop mounted on the clutch drive rod will move and press the divider engagement valve stem.

Compressed air supplied to the switch-on valve from pressure reducing valve 4 will go to the air distributor and then to cavity A.

In the figure shown, compressed air enters cavity A of the power cylinder and does not move the piston from the extreme right position, while maintaining the shift shaft lever and the low gear in the divider in the same position. 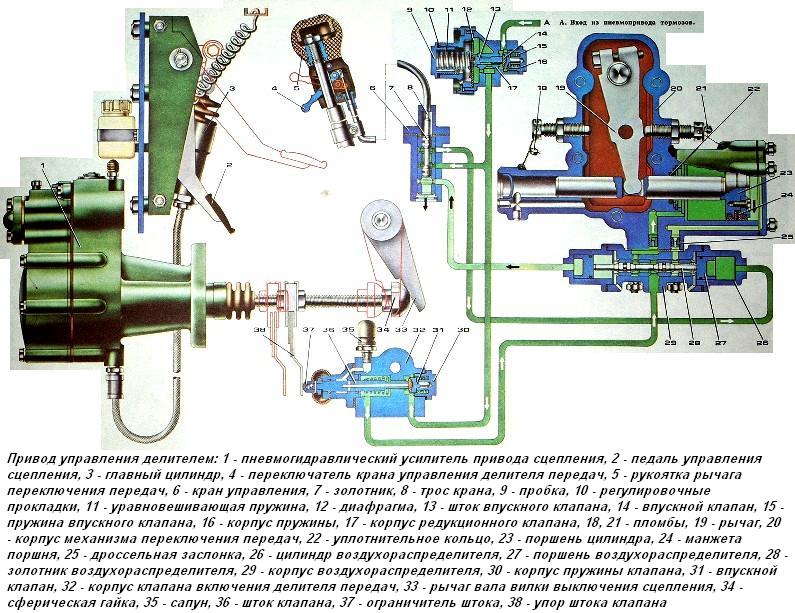 To engage the top gear of the divider, you must move the switch to the upper position and press the clutch pedal, then the piston of the power cylinder will move and move the lever with the roller and fork to another fixed position.