The roller bearing is located on the shaft neck until it stops through the thrust washer into the end of the gear 9 and is closed with a cover 10.

The gears of the first gear, reverse gear and second gear are made integral with the shaft, gears 5 of the third gear, 6 of the fourth gear and 9 of the intermediate shaft drive are pressed onto the shaft and additionally secured with segment keys.

All gears are fixed on the shaft with a thrust ring installed in the groove of the shaft between the inner ring of the bearing and the end of the countershaft drive gear.

The gears of the first gear and reverse gear are spur, the rest are helical. 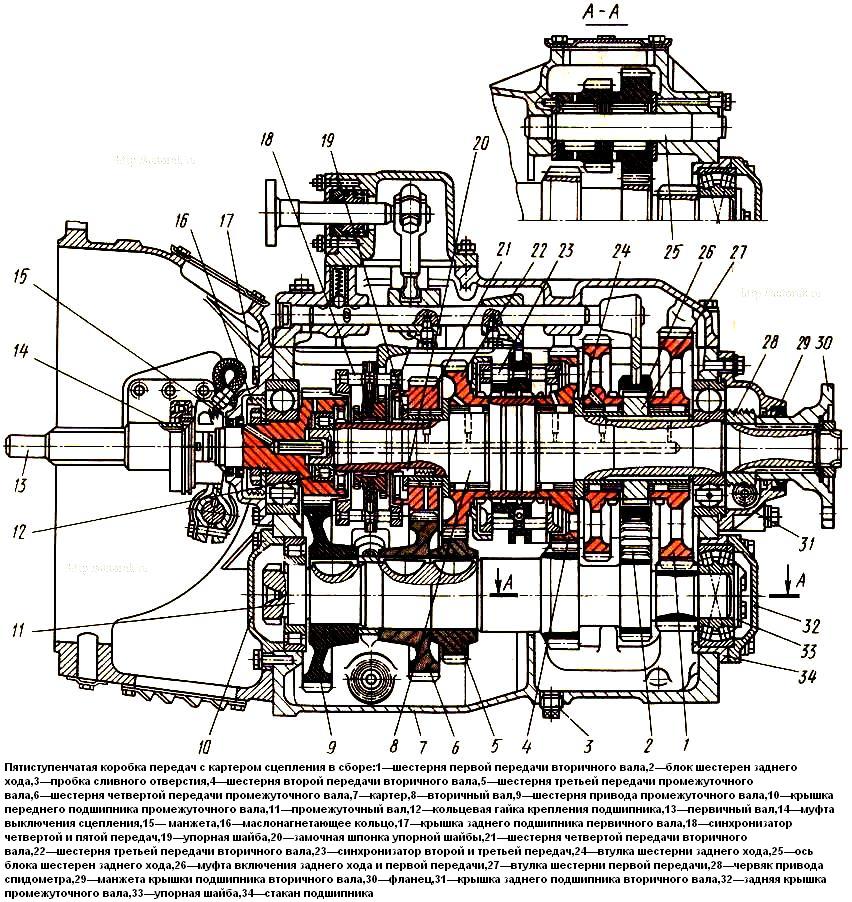 A spherical bearing is mounted on the back wall of the intermediate shaft.

The inner ring of the bearing is pressed all the way into the end of the first gear and fixed on the shaft with a thrust washer screwed to the shaft with two bolts.

The outer ring of the bearing is installed in the cup 34.

The axial forces generated by the operation of the gearbox are absorbed by the spherical roller bearing.

A block of 2 reverse gears is mounted on an axle in two roller bearings.

The axle is fixed in the crankcase with a locking bar. The block has two spur gears.

Axial movement of the gear set is limited by two thrust washers. The washers are secured with pins to prevent rotation.

Inertial synchronizers with conical friction rings are installed to ensure smooth alignment of the circumferential speeds of the gears and thus the possibility of shock-free engagement of fourth and fifth, second and third gears.

The synchronizer of the second and third gears consists (Fig. 2) of the carriage 5, two friction rings 2 to 4. eight locking fingers 3 and four fingers 1 of the clamps. 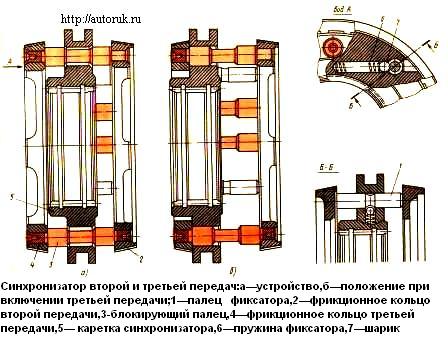 A groove is machined on the carriage, which includes crackers for the second and third gear forks.

The carriage has an internal splined hole, consisting of three gear rims, with which it is connected to the splined part of the output shaft.

The carriage constantly rotates along with the secondary shaft.

The outer gear rims are thinner than the average and, in combination with the gear rim of the output shaft, when the second or third gear is engaged, form a “lock” that prevents the gears from self-switching off while the vehicle is moving.

In the carriage along the circumference parallel to the axis, eight holes are made for the blocking fingers and four holes for the fixing fingers.

In the neutral position, the locking pins are in the clearance holes of the carriages. Friction rings are pressed onto the outer ends of the blocking fingers until they stop at their ends.

Rectangular grooves are made on the conical surface of the rings to remove wear products, and helical grooves are cut along the circumference to extrude oil from the conical friction surfaces when the ring is pressed against the cone of the engaged gear, which increases the friction force between them.

The fingers 1 of the clamps are installed in the holes of the carriage between the friction rings 2 and 4. In the middle part, the fingers have a groove into which the ball 7 enters, pressed by the spring 6.

In the neutral position, under the action of spring 6, the ball is pressed against the ring, enters its groove and prevents spontaneous movement of the carriage. To bring the carriage out of the middle position, you need to apply force.

The work of the synchronizer is as follows.

When you turn on, for example, the third gear (Fig. 2 b), the synchronizer carriage 5 tends to move to the left under the action of the gear shift fork.

During the initial movement, the carriage moves together with the pins of the detents and friction rings until the conical surface of the ring touches the cone of the third gear.

When the cone of the friction ring comes into contact with the cone of the third gear, the latter, under the action of friction forces, drags the carriage along with it, turning it relative to the blocking fingers 3.

The angle of inclination of the chamfers is chosen so that while the friction moment is in effect, i.e. while ring 4 and gear 22 are synchronized (see Fig. 1), further movement of the carriage along the splines of the output shaft is impossible.

When the circumferential speeds become equal, the moment of friction disappears, the blocking fingers 3 (Fig. 2) will take a neutral position relative to the holes in the carriage 5 and it will move in the axial direction under the action of the gear fork.

At the same time, the balls of the retainers 7 are recessed and the carriage moves along the large diameters of the blocking fingers 3 towards the third gear.

The gear end of the carriage silently engages with the ring gear of the third gear.

The second gear is switched on in the same way, with the only difference that in this case the peripheral speed of the carriage will be greater than the peripheral speed of gear 4 (see Fig. 1) of the second gear and when the cones come into contact, the carriage will slow down under the action of the friction moment, turning relative to the blocking fingers in the opposite direction than when turning on the third gear.