The design of the rear suspension of the car Gazelle

The suspension can be used with small leaf or multi-leaf springs. The small-leaf spring consists of three leaves

Multiple leaf springs are bundled in packs of five, flat side up.

The top three sheets are tied together with clamps, and the entire package is connected with a center bolt. 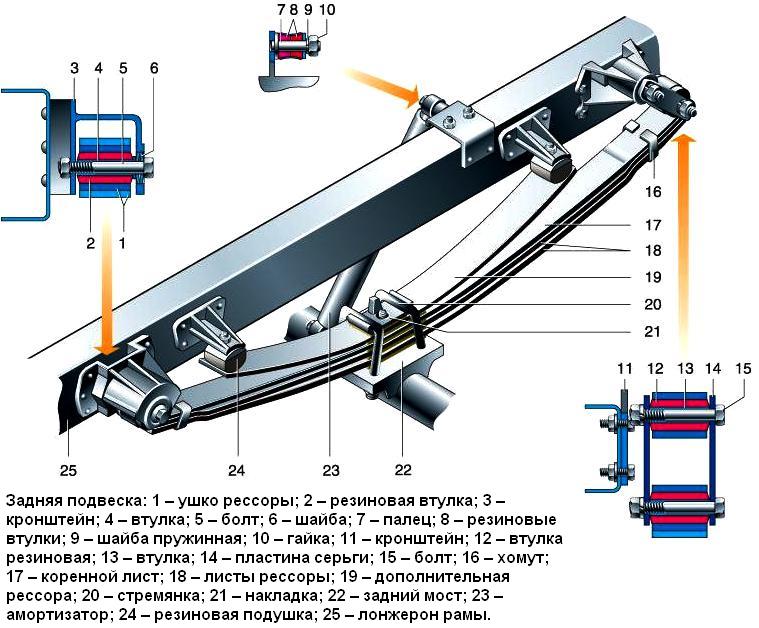 The spring is attached to the brackets of the frame spars through two upper sheets, the ends of which are bent and form ears.

The rear eye, formed only by the top sheet, is attached to the bracket through an earring that compensates for the change in the distance between the ends of the spring during suspension operation.

The springs are attached to the rear axle with stepladders through linings, gaskets and pillows.

On trucks and vans, an additional spring is located on top of the main spring, consisting of one or three sheets. Its ends do not have ears and, when the car is loaded, rest on rubber cushions installed in the frame brackets.

Buses have a rubber buffer instead of an additional spring.

Shock absorbers - telescopic, two-pipe, collapsible. The lower end (reservoir) is attached to the spring pad, and the upper end (rod) to the frame spars.

Replacement of springs can be found in the article - "Removing, installing and repairing the rear spring of a Gazelle car '.

On request, a rear suspension stabilizer can be installed on the car, consisting of a rod, brackets, earrings, rubber bushings and mounting bolts.

Due to its installation, the lateral stability of the car is increased.

Possible malfunctions of the rear suspension

Frequent "breakdowns" of the suspension:

- The car is overloaded

Do not overload the vehicle

"Breakouts" are accompanied by a metallic knock:

Vehicle "driving" to the side:

- Displacement of the root sheet when the center bolt is destroyed

Car roll to one side: