In the fuel injection system of the engine, the pressure is 30 MPa (3 kgf/cm2). 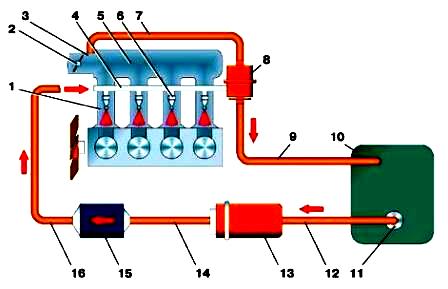 Scheme of the fuel injection system is shown in the figure.

This control method makes it possible to ensure the optimal composition of the combustible mixture at each particular moment of engine operation, which allows you to get maximum power with the lowest possible fuel consumption and low exhaust gas toxicity.

From the fuel line of the engine, fuel is injected by injectors into the intake pipe. Excess fuel is drained to the fuel tank through a pressure reducing valve installed at the rear end of the engine fuel line.

The nozzle is an electromechanical valve in which the check valve needle is pressed against the seat by a spring .

The amount of fuel injected by the injector depends on the duration of the electrical impulse.

The pressure reducing valve is a container divided by a diaphragm, on which a valve is fixed, which closes the fuel drain hole under the action of a spring.

The main element of the sensor is a platinum filament heated up to 150°C during operation.

As engine intake air passes through the sensor housing, the filament cools down, and the sensor electronics constantly strive to maintain the filament temperature at 150°С.

To provide the ability to adjust the amount of carbon monoxide in the exhaust gases at idle, the electronic module has a variable resistor, with a screw of which you can manually change the value of the signal supplied by the sensor to the electronic control unit, thereby changing the duration of the pulse applied to the injectors, and hence the amount of injected fuel.

To clean the platinum filament from impurities, the electronic module periodically applies an increased voltage to it, causing it to heat up to 1000 ° C. In this case, all deposits are burned.

If the sensor fails, the engine control unit turns on a backup program that ensures engine operation with somewhat degraded, but acceptable power and consumption characteristics. At the same time, the control lamp in the instrument cluster lights up.

The idle speed control is used to maintain the set idle speed of the engine when it start-up, warm-up and load changes caused by turning on auxiliary equipment.

The warning lamp in the instrument cluster comes on. If the idle speed is unstable and the control lamp does not light up, it is necessary to check the tightness of the connection of the connecting hoses.

throttle position sensor, which is a dual variable semiconductor resistor, mounted on the throttle on the same axis with the throttle.

If the sensor fails, the engine control unit works according to the backup program stored in the “memory”, using data from other sensors. At the same time, the control lamp in the instrument cluster lights up.

speed and timing sensor is located at the front of the engine on the right side.< /p>

According to the signal from the sensor, the engine control unit determines the angular position of the crankshaft and its speed.

If the crankshaft position sensor fails, the engine will not start, because the control unit, without receiving a signal from the sensor, will not turn on the injection and ignition systems.

knock sensor located at the top of the engine block on the right side and secured with a nut with spring washer.

The knock sensor is based on the principle of the piezoelectric effect. Under mechanical action on a piezoelectric element made of cermet, an electric current arises in it.

The mechanical action is carried out by an inertial washer, which perceives the shock wave that occurs in the combustion chamber and engine cylinder during detonation combustion of the fuel mixture.

In this case, a voltage pulse occurs in the sensor, which it transmits to the control unit from the plug. Based on this signal, the control unit corrects the ignition timing until detonation stops.

The failure of the sensor or the presence of a malfunction in its electrical circuit will lead to the lack of optimal change in the ignition timing niya in the presence of detonation. At the same time, the indicator lamp in the instrument cluster will light up.

The phase sensor is located at the rear of the cylinder head on the left side.</ p>

The principle of operation of the sensor is based on the Hall effect.

If the phase sensor fails, the control unit switches to standby mode with fuel supply to all cylinders simultaneously. At the same time, engine performance is maintained, but fuel consumption is significantly increased.

An air filter with a dry replaceable filter element made of corrugated filter paper is located in the right front of the engine compartment.

The rotary type electric fuel pump driven by a DC motor is located directly in the pump housing and works in the fuel.

The fuel filteris installed in the engine compartment above the brake booster.

Replacing the standard filter with some other, for example, a unified one in a plastic housing, is strictly prohibited due to the high fuel pressure in the system.

The ventilation system of the crankcase of a closed-type engine is forced, acting due to a vacuum in the intake pipeline.

When the engine is idling and at low loads, when the throttle is closed, crankcase gases are sucked through the hose of the small branch of the system directly into the engine intake pipe and then into the cylinders