To keep the hood in the closed position when the car is moving, a pin-type hood lock 9 is used, which is attached to the top panel of the radiator

To open the hood lock, there is a remote drive mounted on the left front pillar of the cab under the instrument panel.

The hood pin, pin flange, spring and pin stopper are attached to the hood.

When the hood is installed correctly, the necessary adjustments are made, the hood pin should freely enter the lock cup and be clearly fixed with a latch in the closed position.

When the pin is correctly adjusted, the hood should have a movement along the edge of 1-2 mm in the closed position. 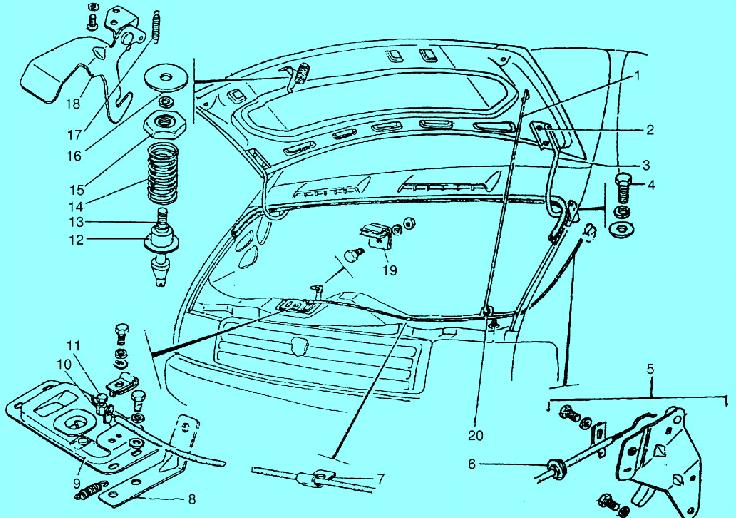 To protect against accidental opening of the hood while driving, a safety hook is attached to the hood and engages with the hood lock.

Adjust the engagement of the safety hook with the lock by bending the hook.

Adjust the hood lock and its parts in cases of replacement (repair) of the hood, the lock itself and the lock drive.

In the first case, mainly adjustments are made to the pin of the hood lock and the safety hook and a slight longitudinal adjustment of the lock.

In the second and third cases, the operation of the drive is first adjusted (so that the latch of the lock moves to the stop), and then the pin and the safety hook are adjusted.

Before operating the car, with the hood open, check the operation of the lock itself, for which, move the latch of the lock to the right with your hand, and then release it; under the action of the spring, the latch should return to the extreme left position until it stops against the body.

If this does not happen, then it is necessary to remove the lock and cut the groove under the latch so that it reaches the stop into the lock body. After that, install the lock in its original place.

If this does not happen, then it is necessary to straighten the end of the hood lock actuator rod, loosen the bolt 11 and remove the nut 10.

Return the hood lock drive handle to its original position, take the pliers and pull the rod towards you as far as possible, and then fix it with nut 10 and bolt 11 and check the operation of the drive again.

If the result is positive, bend the end of the drive rod to prevent movement of the nut 10.

The lock does not require special maintenance.

If the force increases when opening the hood lock during operation, it is necessary to disconnect the lock drive from the lock, as described above, the drive brackets, drive mounting bolts, remove the entire drive from the car, release the rod, clean it and wipe it, then lubricate it with CIATIM- 201, or LITA, or Litol-24.

Reassemble the drive, install it in place and follow the recommendations above.

The hinges are unbalanced, and therefore a hard stop is used to hold the hood open.

One of its ends is fixed on a special bracket with a bushing; the second rests against the hood (enters into a special curly hole).

In the folded lower position, the stop is fixed in a special clip.

For the correct installation of the hood in terms of gaps and the surface in relation to the wings, lining, etc., adjustments are provided in the horizontal plane on the hinges, and in the vertical plane - on the hinge brackets.

The hood hinges are a non-separable assembly. Therefore, in the event of a squeak ("squeak"), it is necessary to lubricate the hinge with engine oil.

If significant axial movements appear in the hinge, which leads to hood movements during movement, it is necessary to remove the hinges and additionally rivet the hinge or replace it with new ones.

To repair the hinges, you must remove the hood, then release (unscrew) the fastener sling from the bulkhead and remove the hinges.

After repairing the hinges, install in the reverse order and adjust the hood and hood lock.