The transfer case, used on off-road vehicles KAMAZ-4310 and KAMAZ-43105, serves to distribute torque between the front drive axle and the two drive axles of the rear bogie

When driving on a rough road, it is necessary that the drive wheels of the front and two rear axles, running around bumps that have a different longitudinal profile, can rotate at different speeds. 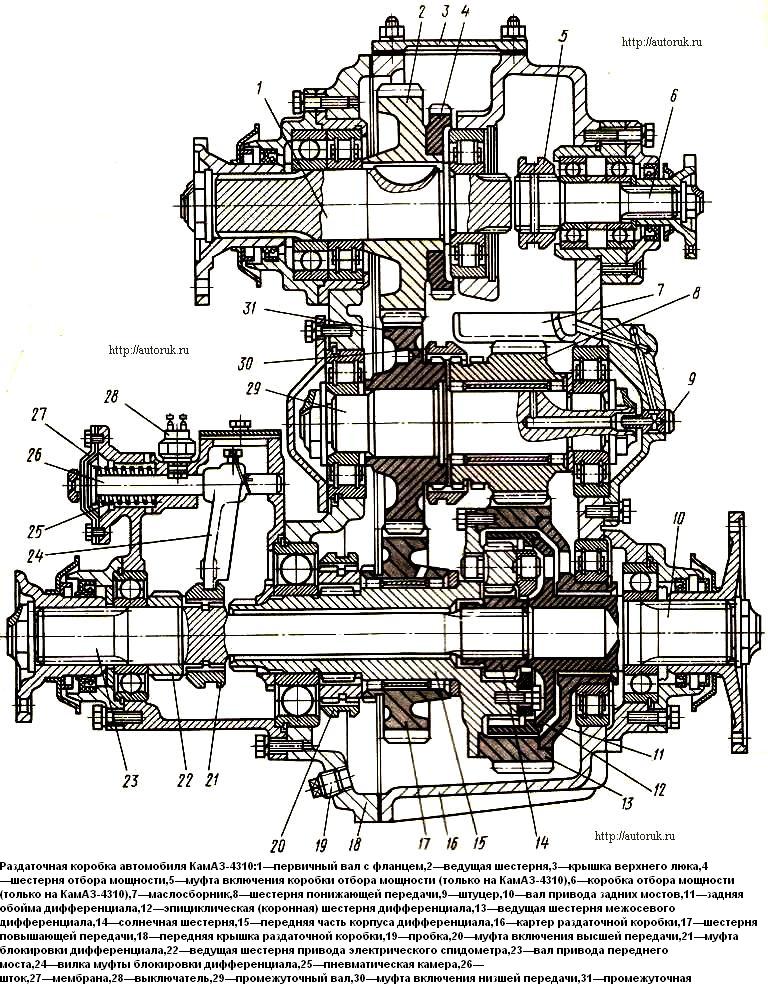 When rolling over this ledge of the rear wheels, the speed of their rotation should also increase.

If the front and rear wheels are rigidly connected to each other through transmission mechanisms, they will always be forced to rotate at the same speed, as a result of which increased tire wear and large power losses to overcome friction between the wheels and the road are inevitable.

The ability to rotate the wheels of the front and rear axles at different angular speeds is provided by the center differential used in the transfer case.

However, the use of a differential drive on slippery roads and on wet soils with little grip can lead to a decrease and loss of vehicle patency.

To increase the cross-country ability, cars are provided with a differential lock device.

The inclusion of the lowest (first) gear 3 in the gearbox and in the transfer case makes it possible for the car to overcome high resistance to movement.

The transfer box is mounted on a frame and bolted to four rubber pads, made according to a three-shaft scheme.

Inside the crankcase, the input shaft 1 (Fig. 1) is placed on the bearings with the driving gear 2 and the power take-off gear 4.

In the upper part of the crankcase there is a hatch closed with cover 3 for installing a special power take-off box.

This box allows you to take power from the input shaft up to 44.1 kW (60 hp) while driving.

It is turned on when the car is stopped. A single-speed 6 power take-off for the winch is installed in the bore of the rear end of the crankcase.

The underdrive gear 8 and the overdrive gear 17 are mounted on roller bearings with aluminum cages.

An asymmetric cylindrical center differential is installed on the drive shaft of the rear (intermediate and rear) axles.

The differential consists of a sun gear 14, four satellites, an epicyclic (crown) gear 12, mounted in a split differential housing.

When the differential is unlocked, the torques between the front and rear drive axles are distributed in a ratio of 1:2, ensuring constant and even traction on all drive axles.

When driving in difficult road conditions, the differential must be locked. In this case, the maximum traction capabilities of the car are provided.

The position shown in the figure corresponds to the position in the transfer case with the differential unlocked.

Shifting gears in the transfer case is carried out by an electro-pneumatic system consisting of a three-position switch 1 (Fig. 2) installed in the cab, two electro-pneumatic valves 2 and 3, two mechanisms 7 and 12 for gear shifting of a membrane type, a switch 8 mounted on mechanism 7 , pneumatic lines 4.

When switch 1 is set to position 1, a downshift is engaged. Compressed air does not enter the switching mechanisms. The position of the shift sleeves is as shown in the figure

When switch 1 is set to position II, overdrive is engaged. Electropneumatic valve 2 is switched on.

The air from the pneumatic system is supplied to the mechanism 7 of the gear selector, the membrane of which moves the rod 9 through the pressure spring 10 until the glass stops 5 into the protrusions of the mechanism body. 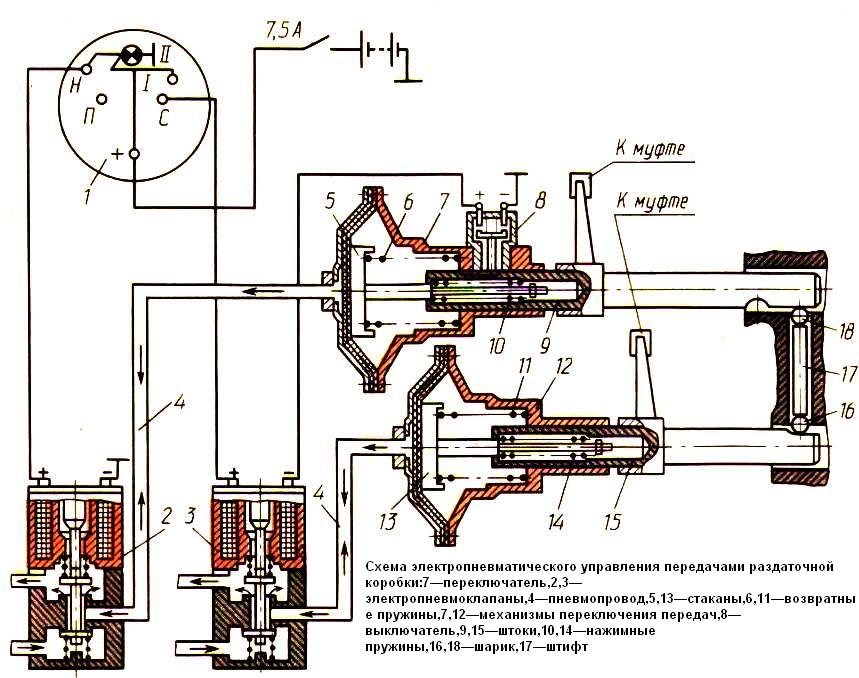 In this position, switch 8 is activated, which turns on the electro-pneumatic valve 3.

The air enters the mechanism 12, the rod 15 of which moves through the pressure spring 14 until the glass 13 stops against the mechanism body. In this case, clutches 20 and 30 (see Fig.) move successively to the right.

The locking device, consisting of balls 16 (Fig. ) and pin 17, does not allow you to shift up when the downshift is engaged.

When the switch I is moved back to position I, the return springs 6 and 11 sequentially return the rods of the mechanisms through the pressure springs 10 and 14 through the locking mechanism until they stop against the covers.

When switch I is set to position H, neutral gear is engaged.

Only the electro-pneumatic valve 2 is activated. As a result, air is supplied to the mechanism 7 and the clutch 30 (see figure) moves to the right.

The car can be equipped with a pneumatically controlled transfer case, which has a three-position cam valve 1 (Fig. 2), located in the cab on the lower instrument panel to the left of the valve lever for engaging the center differential lock mechanism.

Switch 4 of the control lamp 2 for downshifting is located on the housing of the gearshift mechanism 3.

Installation of a control lamp is provided in the left block of control lamps of the instrument panel.

The center differential lock is also activated by a diaphragm pneumatic chamber, which differs from the gear shift chamber by the absence of a pressure spring.

The differential lock mechanism is activated by a pneumatic valve installed in the cab under the dashboard.

The transfer box is spray lubricated.

To supply oil to the bearings of the reduction gears of the intermediate shaft, there is an oil sump in the crankcase of the transfer case, connected through holes in the crankcase, bearing cap, fitting, shaft with the bearing zone