After repairing the engine assembly units or replacing them, run the engine on a stand equipped in accordance with the requirements of GOST 14846-81 in one of the following modes, depending on the replaced parts:

1. After replacing the crankshaft, camshaft, one or more pistons or sleeves, more than half of the shells of main or connecting rod bearings, as well as more than two piston rings, run in in the main mode, which includes "cold" and "hot" break-in (Table 1 , 2).

At the beginning of the "cold" break-in, the temperature of the oil supplied to the engine is 50 ° C and above. 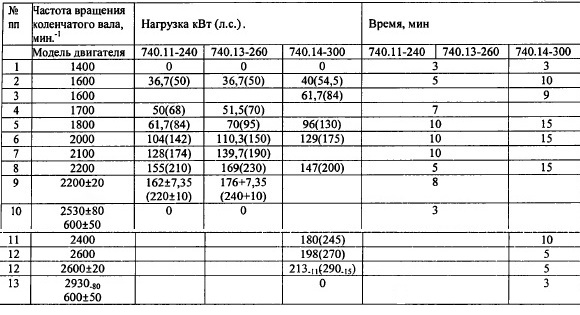 Before a “hot” break-in, check and, if necessary, adjust the thermal clearances in the gas distribution mechanism, the fuel injection advance angle, and the tightening of the cylinder head bolts.

The ejection and leakage of water and fuel, as well as the breakthrough of gases at the joints are not allowed.

2. After replacing less than half of the shells of the main or connecting rod bearings or one piston ring each in no more than two cylinders, run in in the “hot” break-in mode.

3. After replacing the cylinder head or other parts, the replacement of which requires the removal of the head, after removing it to inspect the parts of the cylinder-piston group, as well as replacing the oil, liquid or fuel pumps, fuel pump drive, distribution gears, crankshaft seals, flywheel housing, front block cover, run the engine in the mode indicated in the table. 3.

4. After overhaul without replacing units, assembly units, parts, run the engine in the mode according to paragraph 3.

The engine break-in must always be completed on the vehicle at the recommended driving speeds specified in the Vehicle Owners Manual supplied with the vehicle.

Running in a car with a new or repaired engine within 1000 km of run is mandatory.

The break-in is necessary to ensure the running-in of the rubbing surfaces of the parts, and therefore, during this period, the engine should not be loaded at full power.

The load must be increased gradually so that by the end of the break-in period it does not exceed 75% of the operating power.

After preparing the engine, start it and warm it up. After making sure that the engine is working properly, proceed to the break-in.

When running in, use the car for light work.

Recommendations for choosing break-in modes should be set out in the vehicles operating instructions.

During operation, monitor the condition of the engine according to the readings of control devices.

Long-term operation (more than 15 minutes) of an unrun-in engine in idle mode is not allowed at a coolant temperature in the system below 75 ° C.