With the help of a microprocessor ignition system, more economical engine operation is achieved; with an increase in its power indicators, the operation of the engine with detonation is excluded and the standards for exhaust toxicity are met.

This system is more durable and reliable than the classic ignition system.

There are no parts subject to wear (except spark plug electrodes).

Fig. 1. Numbering of connector pins (view from the side of the wires): XI - connector of the ignition system control unit; X2 - connector for temperature and knock sensors; ХЗ - connector for crankshaft position and absolute pressure sensors 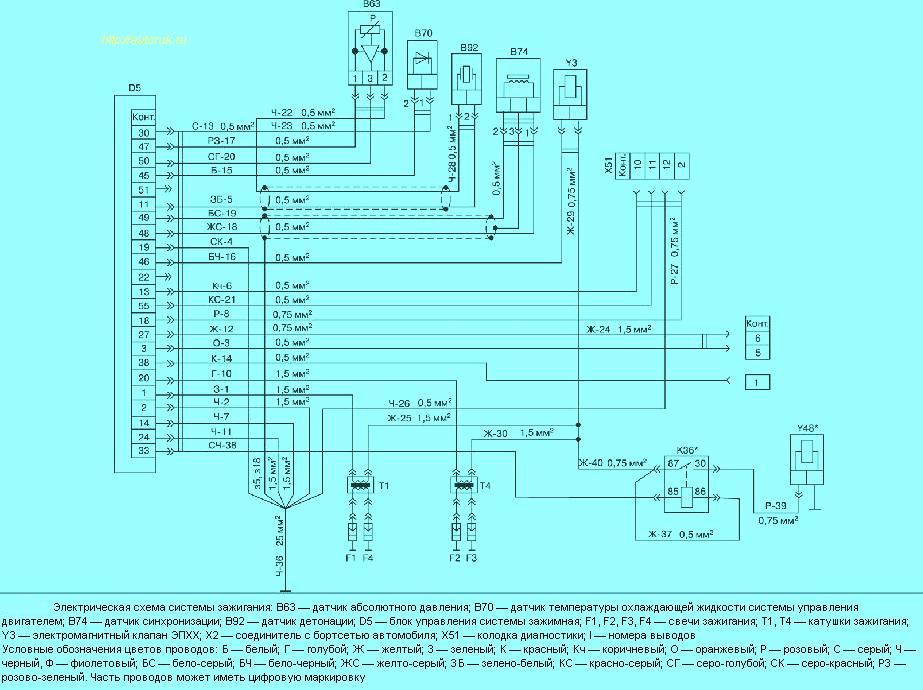 The main element of the block - the microprocessor - performs all calculations and generates all the necessary data to ensure the operation of the ignition system and EPHH.

The unit works with the following sensors and assemblies:

The microprocessor ignition system and EPHH work as follows.

When the ignition is switched on, the warning light on the instrument panel lights up

At this time, the microprocessor is in self-diagnosis mode.

After the end of this mode, the indicator lamp goes out if no malfunctions are detected, or lights up if a malfunction is detected.

If the signaling device goes out, the system is operational and ready for operation.

When the engine is cranked by the starter, according to the signals from the crankshaft position sensor, the control unit generates electrical current pulses to the ignition coils to ensure the operation of the candles in accordance with the order of operation of the engine cylinders 1-3-4-2.

High voltage from each ignition coil is simultaneously applied to two candles:

Faults in the ignition system and EPHH

The control unit has a self-diagnosis mode, with which you can determine the malfunctions in the system.

If the control unit in the self-diagnosis mode cannot determine the malfunction, then it is necessary to use a special device DST-2 with the appropriate cartridge (cassette with the program).

In this case, you must follow the instructions that came with the device. The control unit in the self-diagnosis mode issues light codes to the control lamp.

Each malfunction has its own digital code. The digital code is determined by the number of switching on of the control lamp.

First, the number of lamp turns on is counted to determine the first digit of the code (for example, number 1 - one short turn on 0.5 s, number 2 - two short turns, then there is a pause of 1.5 s.

After it, the number of inclusions is counted to determine the second digit of the code, then the third, after which there is a pause of 4 seconds, which determines the end of the code).

If the code is three-digit, the first digit is displayed for 1 second.

To put the control unit into self-diagnosis mode:

The socket is installed in the engine compartment on the bulkhead on the left side.

The following codes will display an existing fault or multiple faults.

Each code is repeated three times.

If the control unit cannot determine the fault or there are no faults, code 12 is displayed.

Diagnostic codes are shown in the table. 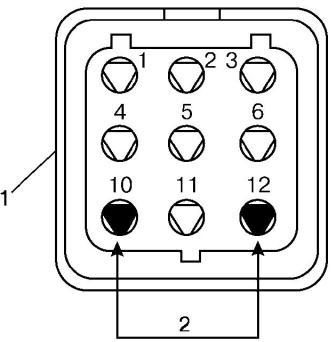 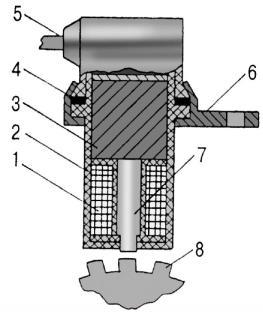 The inductive sensor determines the angular position of the engine crankshaft, the synchronization of the control unit with the engine's working process and its speed.

The knock sensor is installed on the right side of the cylinder block in the area of ​​the fourth cylinder. 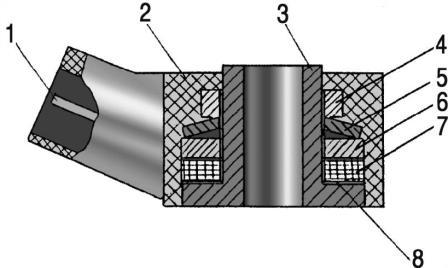 Operating the engine with knocking can lead to the destruction of engine parts (for example, piston, head gasket, etc.

The main elements of the sensor: quartz piezoelectric element 7 and inertial mass 6 (washer).

During the operation of the engine, vibration of its parts occurs. The inertial mass 6 of the sensor acts on the piezoelectric element 7; electrical signals of a certain size and shape arise in it.

The occurrence of detonation in the engine operation sharply increases the vibration, which increases the amplitude of the voltage of the electrical signals of the sensor.

Electrical signals from the sensor are transmitted to the control unit.

According to the knock sensor signals, the control unit corrects the ignition timing until detonation stops.

If the sensor or its electrical circuits fail, the control unit signals the driver by turning on the warning lamp.

The correctness of the sensor can only be checked when the engine is running using the DST-2 device.

Faulty sensor should be replaced

The coolant temperature sensor is a semiconductor element that changes its conductivity depending on the ambient temperature.

The sensor is installed in the thermostat pipe and is designed to determine the temperature of the engine coolant.

The sensor is included in the electronic circuit of the control unit, which, by the magnitude of the voltage drop in the sensor circuit (depending on temperature), corrects the ignition timing.

If a malfunction occurs in the sensor or in the sensor circuits, the control unit signals the driver by turning on the warning lamp.

The correctness of the sensor must be checked with the DST-2 device; in its absence, by the magnitude of the voltage drop in the sensor circuit at different temperatures.

Checked by the DST-2 device as part of the vehicle. 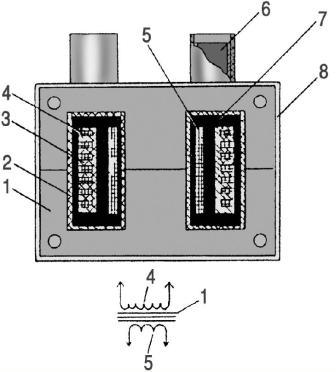 Ignition coils are designed to generate high voltage electric current to ignite the working mixture in the engine cylinders.

Ignition coils (2 pcs.) are mounted on top of the engine. The ignition coil device is shown in

The windings are enclosed in a plastic case 2. The space between the windings is filled with compound 7. The case has low and high voltage terminals 6.

Low voltage electrical pulses are supplied to the ignition coil from the control unit.

In the ignition coil, they are transformed into high voltage electrical impulses, which are transmitted through wires to the candles.

Electric discharge occurs simultaneously in two candles of the first and fourth cylinders or the second and third cylinders.

Electrical discharge in the spark plug of the fourth cylinder during the exhaust stroke does not affect the operation of the engine.

If oil gets on the wires, they should be wiped with a rag soaked in gasoline.

If necessary, check the condition of the current-carrying core of the wire with an ohmmeter.

High voltage wires are connected to candles through special lugs

The handpiece device is shown in

The resistance of a good tip should be no more than 8000 ohms.