Features of the GAZ-560 engine

This reduces the stress in the upper part of the cylinders and eliminates deformation of the valve seats, which increases the durability of the engine. 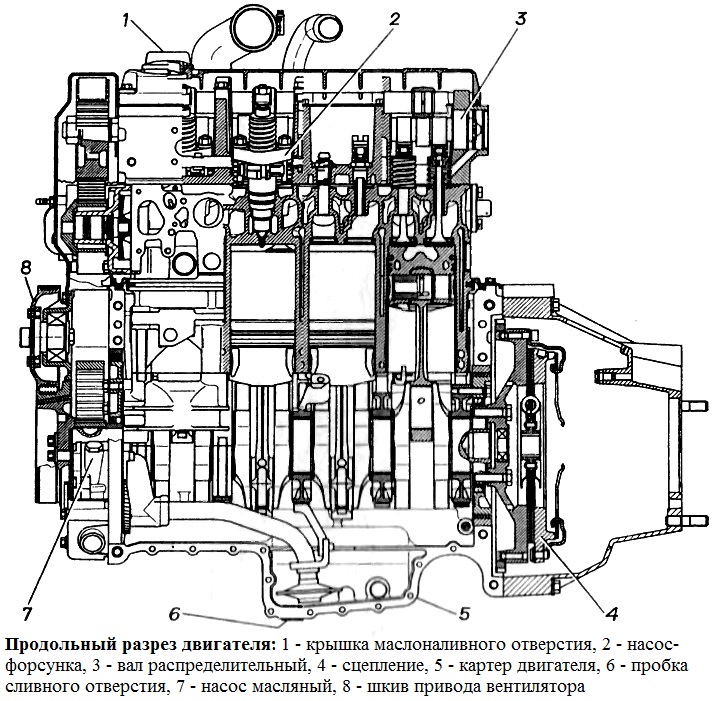 Pump-injectors- have a mechanical drive and electronic-mechanical control. The fuel supply is controlled by a microprocessor depending on the speed of the crankshaft, the position of the gas pedal and the signals from the sensors installed on the engine.

The advantage of the pump-injector lies in the high pressure of fuel injection and, as a result, in its better atomization, which made it possible to provide higher energy performance with less weight compared to similar engines equipped with high-pressure fuel pumps.

Electronic control provides a change in the power characteristics of the engine depending on driving conditions, as well as constant engine diagnostics.

In the event of an emergency or malfunction in its systems, the fuel supply is reduced or stopped.

Starting the engine in winter conditions is provided by glow plugs installed in each engine cylinder.

Monoblock — cast iron. And the monoblock contains blind engine cylinders, gas and air channels, a cooling jacket, channels of the lubrication system and channels that supply fuel to the pump injectors.

The cast-iron seats, valve bushings and the copper insert of the unit injectors are pressed into the monoblock.

The front support ring of the monoblock is installed in the engine crankcase and consists of an outer aluminum ring and an inner steel one.

The rings are separated from each other by rubber vulcanized to them.

The front support ring is pressed onto the oil pump housing.

The oil pump assembly with the front support ring is installed on the bed of the crankshaft and is centered relative to it with mounting sleeves.

When installed on a monoblock engine, the front support ring is centered relative to the axis of the crankshaft with two mounting sleeves.

The rear support ring of the monoblock is installed in the crankcase and consists of 113 two aluminum parts, separated by rubber vulcanized to them.

When installed on the engine crankcase, the ring is centered relative to the axis of the crankshaft with two pins.

Rubber elements on the front and rear bearing rings serve to reduce engine noise. Crankshaft seals are installed in the holes of the rear ring of the oil pump housing. 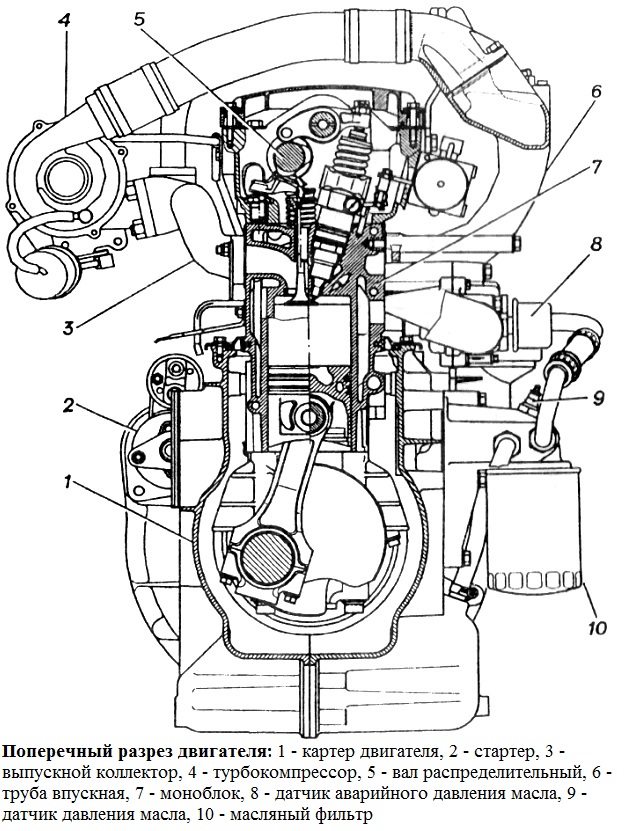 Pistons are made of a special aluminum alloy, with a cast non-resistive cast iron insert for the top compression ring.

The piston skirt is coated with colloidal graphite.

To maintain normal temperature conditions, the pistons are cooled by oil supplied by an oil nozzle (a jet of oil is directed into the cavity of the piston bottom).

Piston rings. The piston has two compression rings and one oil scraper ring.

The connecting rod is finished assembled with the cap, so the caps are not interchangeable.

Pairing marks are applied on the cap and connecting rod.

A steel-bronze bushing is pressed into the upper head of the connecting rod, stitched after pressing; steel-bronze liners are installed in the lower head, fixed with a mustache.

Crankshaft of the engine is steel, forged.

The main and connecting rod journals are nitrided for increased wear resistance.

Oil channels are made in the crankshaft journals to lubricate the connecting rod bearings.

At the front end of the crankshaft, an oil pump drive gear, a camshaft drive gear pulley and a vibration damper integrated with the pulley are installed.

The crankshaft is fixed from axial movements by four steel-aluminum half rings installed in the undercuts of the fourth main bearing and fixed from rotation by means of a radial protrusion on the half ring.

The crankshaft is balanced to reduce engine vibrations.

Top The upper and lower shells of the main and connecting rod bearings are not interchangeable.

The connecting rod bearings for adjusting the over-piston clearance have an eccentricity.

Basic data for adjustments and controls

Deflection* of the belt (between the pulleys of the generator and the fan) of the drive of the units when pressed with a force (4 kgf), mm 10