When voltage is applied to the nozzle winding, an electromagnetic field is created that draws the core along with the locking device needle and passes fuel to the spray holes.

An additional fuel filter is installed in the injector inlet.

Faults for which the injectors are checked:

- jerks and dips in the engine;

Checking the injector without removing it from the engine

To check the health of the injector, turn off the ignition and remove the negative terminal of the battery. 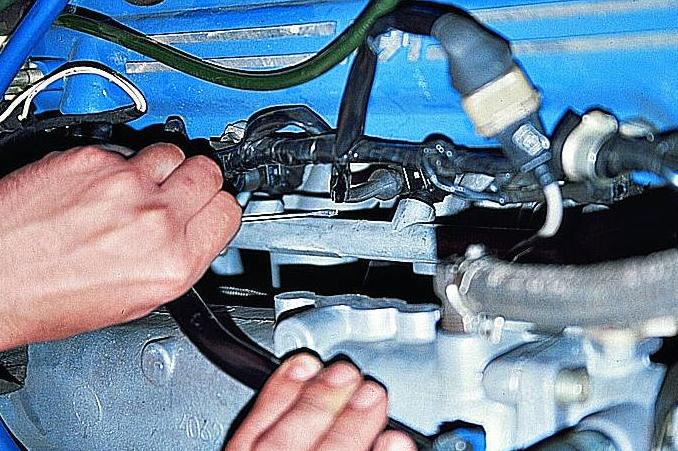 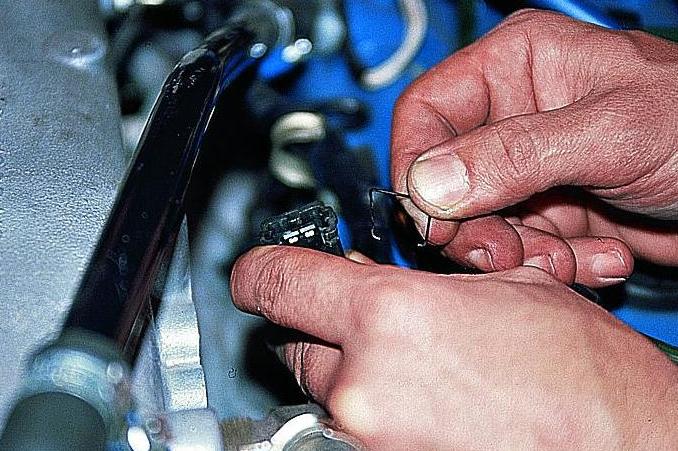 With an awl or a thin screwdriver, snapping off the spring clip of the shoe

Disconnect the connector from the injector. 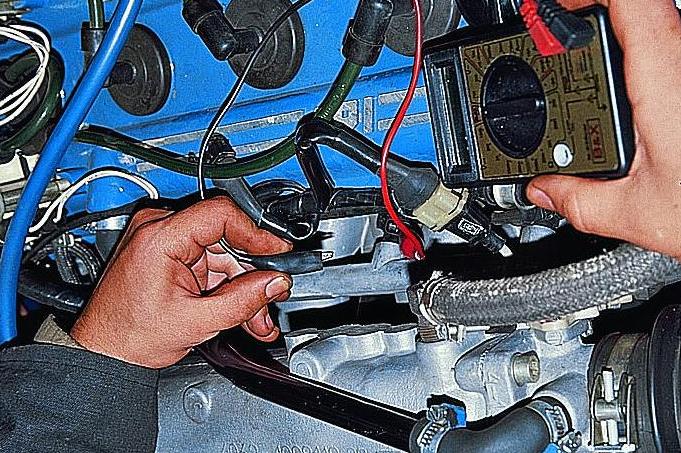 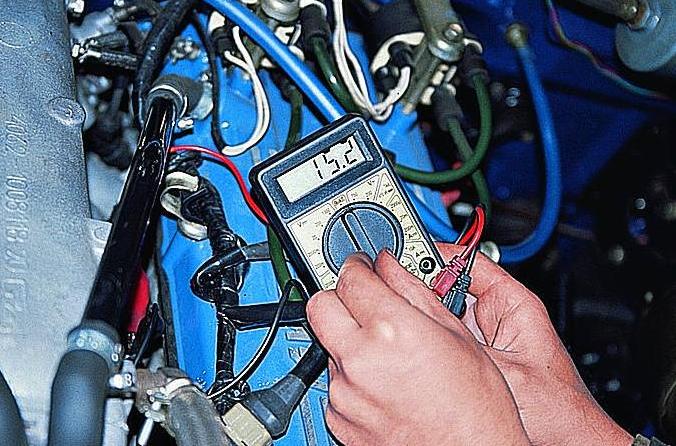 Having connected an ohmmeter to the injector terminals, we measure the resistance of the winding

Further tests are carried out on the nozzle removed from the engine.

Release the fuel pressure in the fuel system. Turn off the ignition and remove the "negative" terminal of the battery.

Remove the inlet air duct and the air damper cable from the throttle pipe (see How to remove and install the throttle assembly of a car Gazelle). 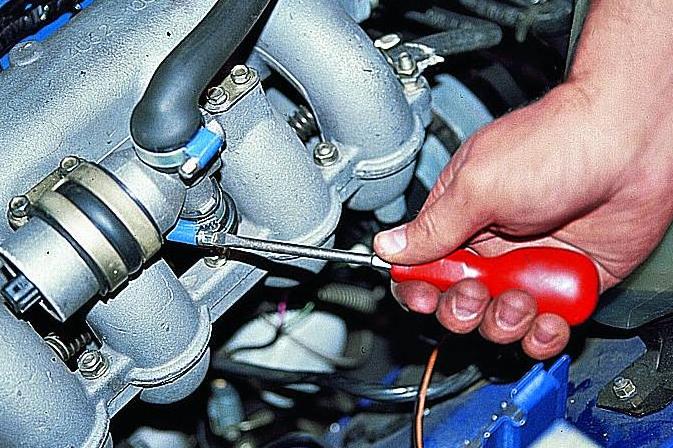 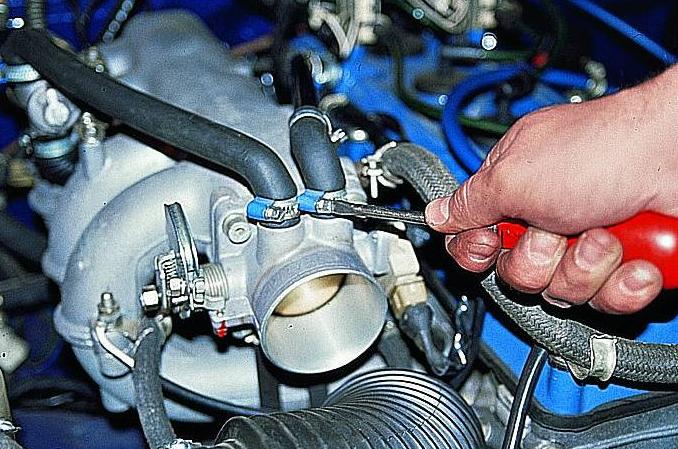 Use a screwdriver to loosen the clamp of the lower (outlet) hose of the idle speed regulator.

We loosen the clamp with a screwdriver, remove the hose of the crankcase ventilation system. 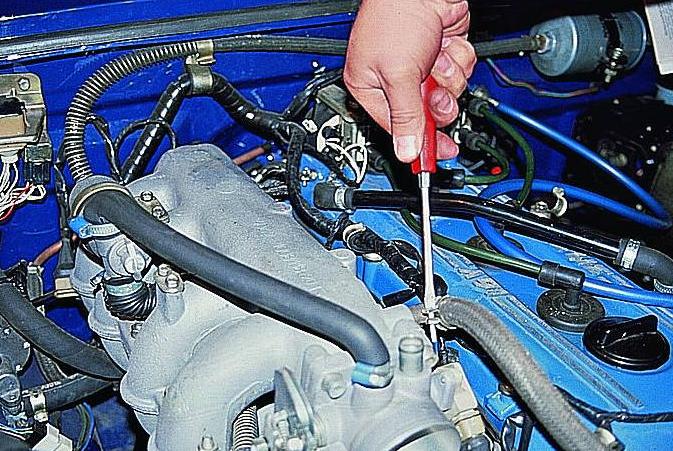 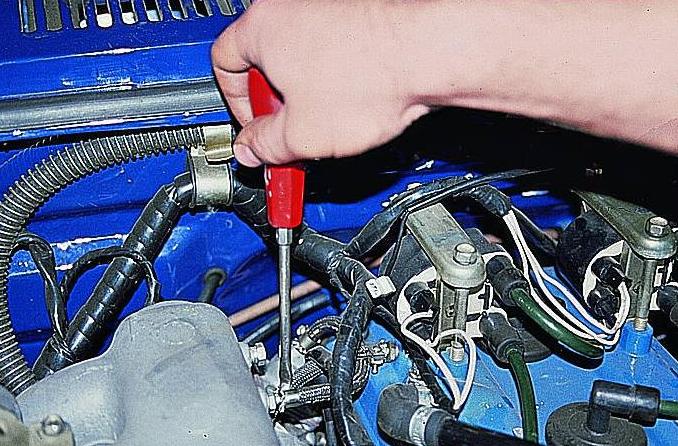 We loosen the clamp with a screwdriver, remove the hose of the vacuum brake booster.

Loosen the clamp with a screwdriver, remove the fuel pressure regulator hose. 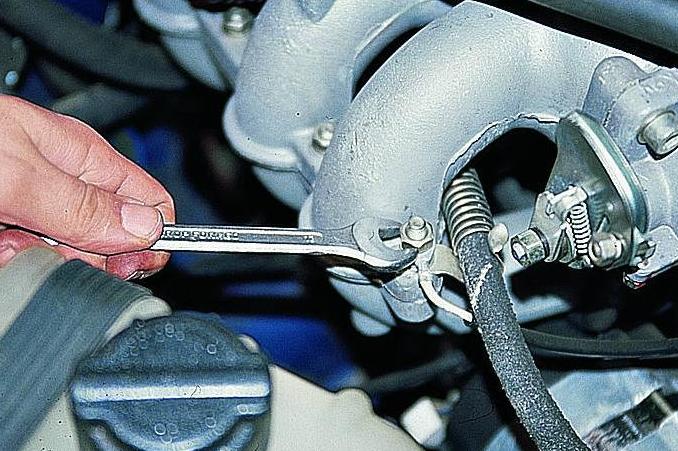 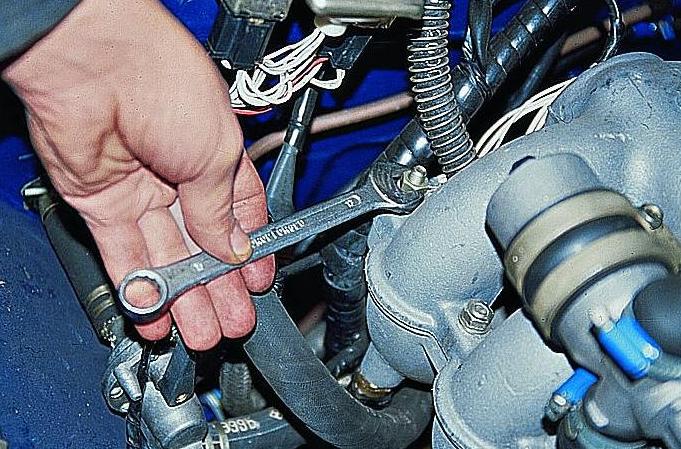 Using a 13 key, unscrew the nut that secures the ground wire tip to the first intake manifold stud. 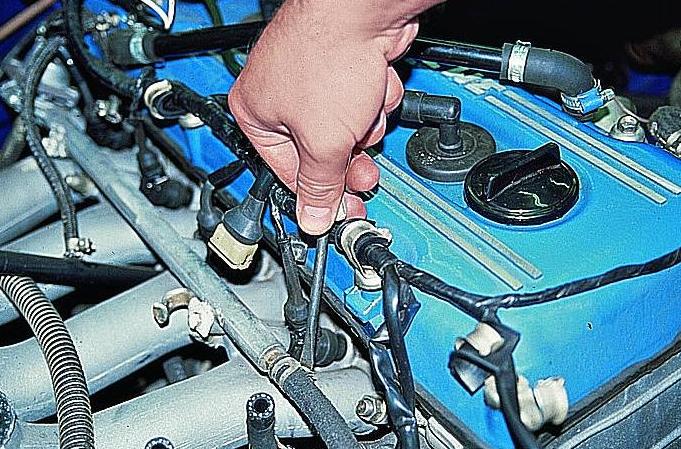 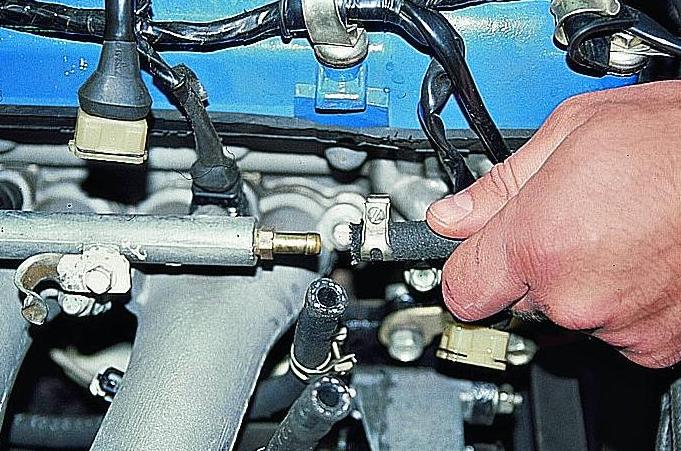 Loosen with a screwdriverm clamp

Remove the supply hose from the fitting of the fuel rail. 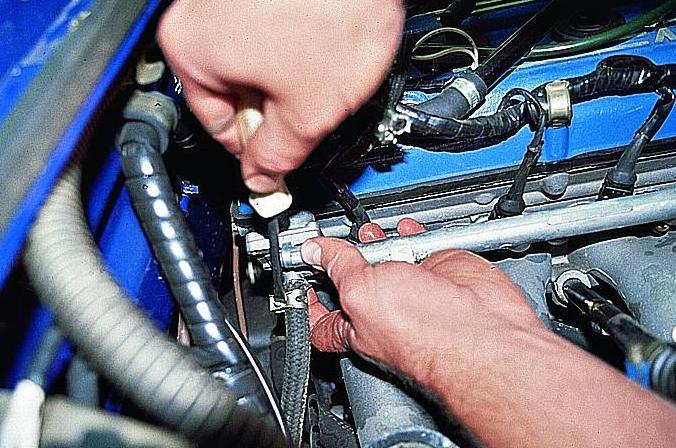 We loosen the clamp with a screwdriver, remove the crankcase ventilation hose from the idling system pipe.

Loosen the clamp with a screwdriver, remove the drain hose from the fitting of the fuel pressure regulator. 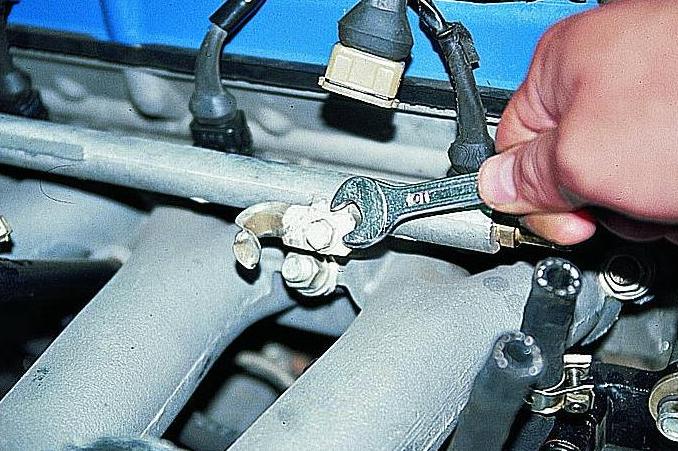 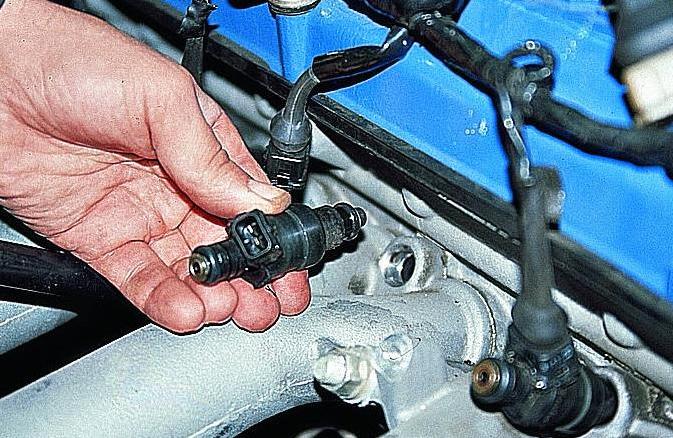 Using a 10 key, we unscrew the two screws securing the fuel rail to the intake manifold and remove the rail

Prying off the spring latch of the block with an awl, disconnect the connector from the nozzle

Remove the nozzle from the manifold.

Install the nozzle in reverse order.

Checking the injector removed from the engine 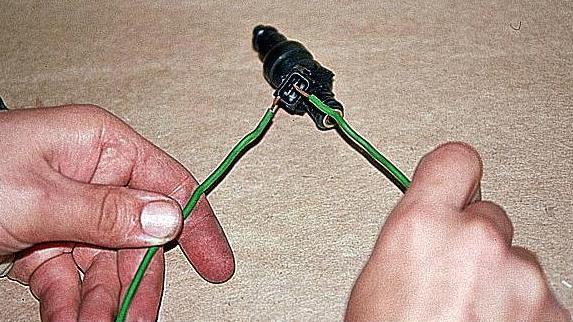 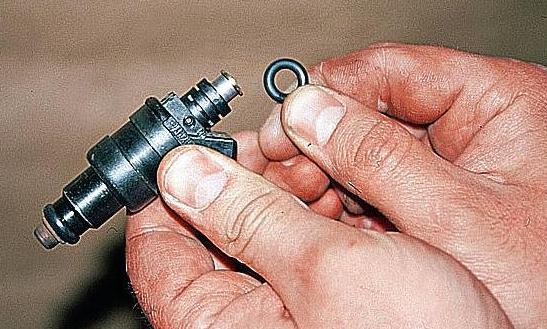 When the battery voltage is applied briefly, a distinct click should be heard.

Remove the sealing collar from the nozzle flange and connect the nozzle with a rubber hose with a clamp to a source of compressed air (a compressor with a pressure gauge or a foot pump).

Having lowered the nozzle sprayer into kerosene, we supply air at a pressure of 3 kgf / cm 2 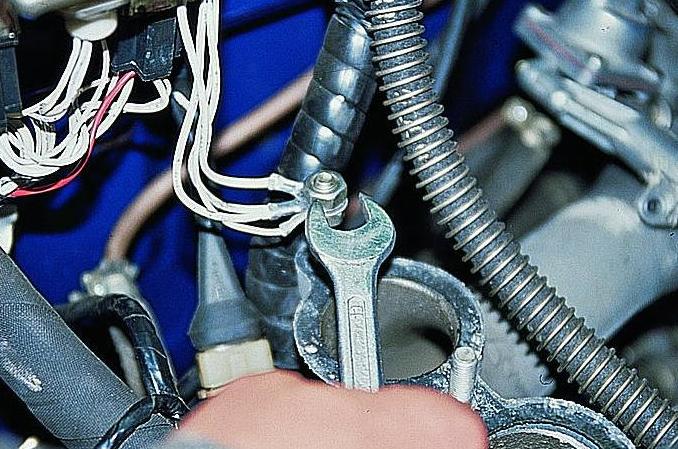 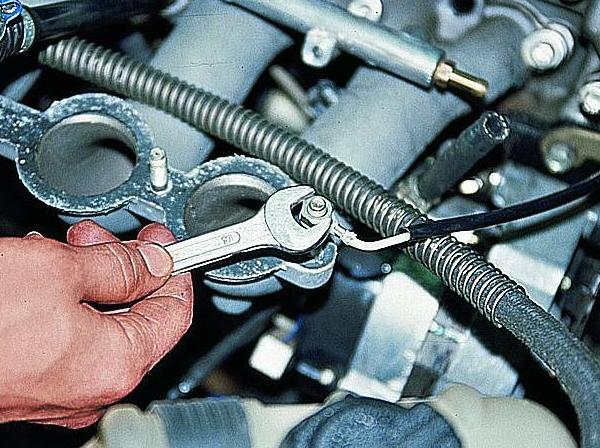 For a working nozzle, air should not pass through the atomizer.

We check the quality of atomization with a fuel injector, for which: We connect the "ground" wires that were removed from the intake manifold studs during the removal of the injectors.

By tightening the nuts with a 13 wrench, we ensure reliable contact with the ground 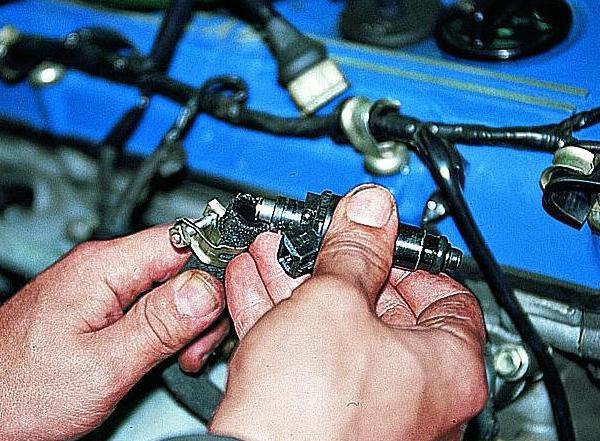 We connect two wires with a length of at least 1 meter to the injector terminals.

After making sure that the ignition is off, we connect the "negative" terminal of the battery.

Turn on the ignition and, after waiting for the fuel pump to stop working, turn off the ignition.

Having fixed the nozzle over the container, we connect the wires to the battery terminals for a short time. 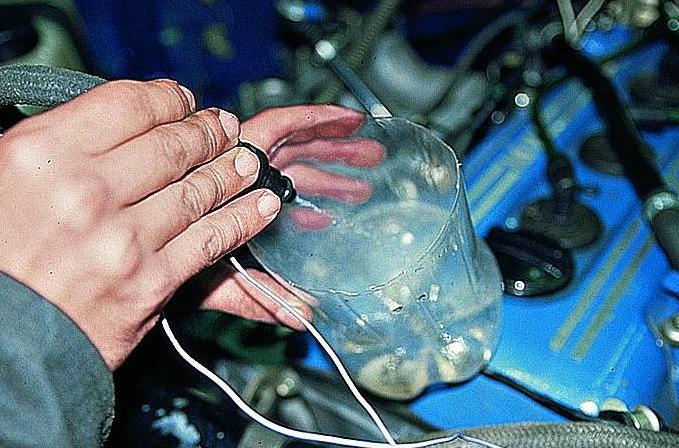 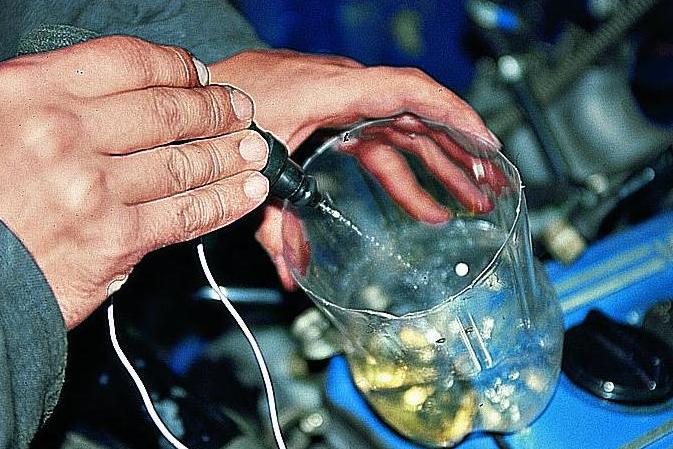 The nozzle should produce a conical jet of finely atomized fuel.

If the nozzle does not work, reverse the polarity of the wires.

Relieve the pressure in the fuel line by applying voltage to the injector.

Pour gasoline into a suitable container

We replace the defective nozzle.

Setting all the details in reverseoh order.