Maintenance of the fuel pump and filter UAZ-3151

Maintenance of the fuel filter-sump

Periodically drain the sludge of dirt and water through the drain hole (fig. 1)

Before the winter season of operation, remove and wash the filter element in gasoline or acetone without disassembling it.

After washing the filter element, blow it with air at a pressure of no more than 97.5 kPa (1 kgf / cm 2) so as not to damage the filter plates. 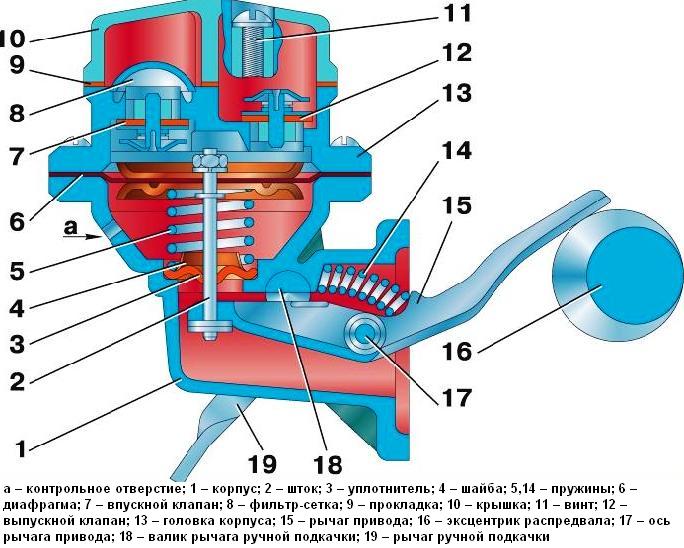 Maintenance of the fuel pump

Periodically remove dirt from the head 13 (Fig. 2) of the fuel pump housing and wash the strainer 8.

When replacing the cover 10, make sure that the gasket 9 is intact.

Fuel leaking through the control hole indicates a malfunction of the diaphragm 6. In this case, remove the pump, disassemble and replace the diaphragm.

When assembling the pump, tighten the head mounting screws with the diaphragm pulled to its lowest position.

Periodically check the pump attachment to the engine and the tightness of the fuel line connections.

Before the onset of the hot season, check the pressure developed by the pump.

Check without removing the pump from the car when the engine is running at a low idle speed.

During the test, disconnect the tube supplying fuel to the carburetor from it and connect it to a pressure gauge with a scale of up to 100 kPa (1 kgf / cm 2).

The engine is started and powered by the fuel available in the carburetor float chamber. The pump must generate a pressure of at least 11.7 kPa (0.12 kgf/cm 2).

If the pump does not meet the specified requirements, repair or replace it. 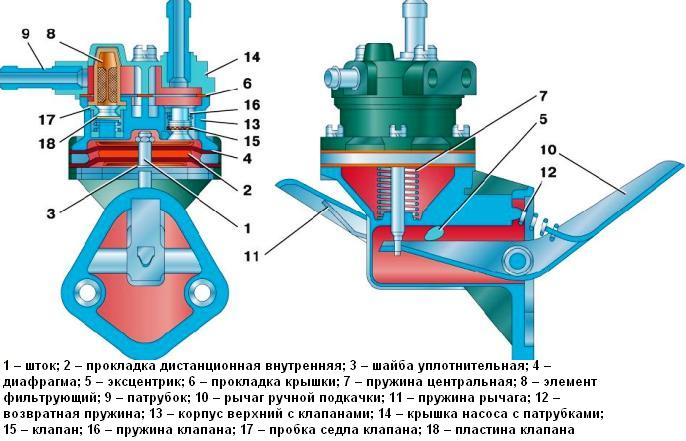 The fine fuel filter can be used in two types: collapsible, with a replaceable filter element and non-collapsible.

The dismountable fuel filter is attached to the cylinder head bracket.

It consists of a housing, a rubber gasket, a sealing rubber bushing, a ceramic or paper filter element, a spring, a plastic sump cup and sump cup attachment parts.

A filter with a plastic non-separable housing and a paper filter element is installed on a hose that supplies fuel to the carburetor.

Maintenance of the fuel fine filter 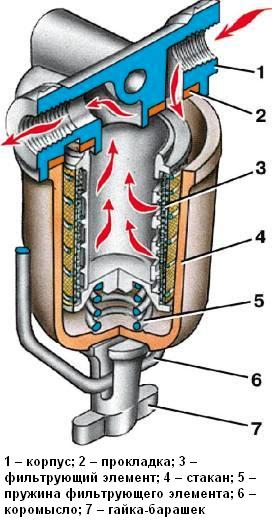 Disassemble it periodically to clean the sump and filter element.

To disassemble, loosen the wing nut 7 (Fig. 4) and move the bracket 6 to the side, then remove the sump together with the filter element 3.