The engine cooling system is liquid, closed, with forced circulation of liquid and an expansion tank

The tightness of the cooling system allows the engine to operate at a coolant temperature exceeding 100 ° C, but when the coolant overheat warning lamp lights up, the engine must be stopped and the cause of overheating eliminated.

In cases of frequent topping up, it is necessary to check the tightness of the system.

In case of a significant leakage of liquid, in exceptional cases, the use of water is allowed to restore its level.

However, this will inevitably reduce the density of the mixture and increase its freezing point, so you should replace the coolant with a new one as soon as possible.

To change the coolant:

- place the car on a flat area;

- remove the cap from the expansion tank;

- first open the faucet on the monoblock and after completely draining the liquid from the monoblock, open the plug of the cooling system (on the radiator).

flush the cooling system, filling it twice with coolant and warming up the engine to a temperature of 80-90°C;

- pour new coolant into the expansion tank 30-50 mm above the MIN mark and replace the tank cap.

For a more complete removal of air from the cooling system, you must:

- shine the plug from the expansion tank;

The opening of the thermostat valve can be detected by a noticeable increase in the temperature of the upper radiator hose when you touch it with your hand. 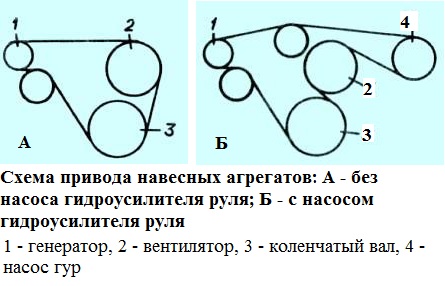 Do not close the cap of the expansion tank!

- if necessary, add fluid and install the cap of the expansion tank.

The final check of the fluid level should be carried out on a cooled engine. 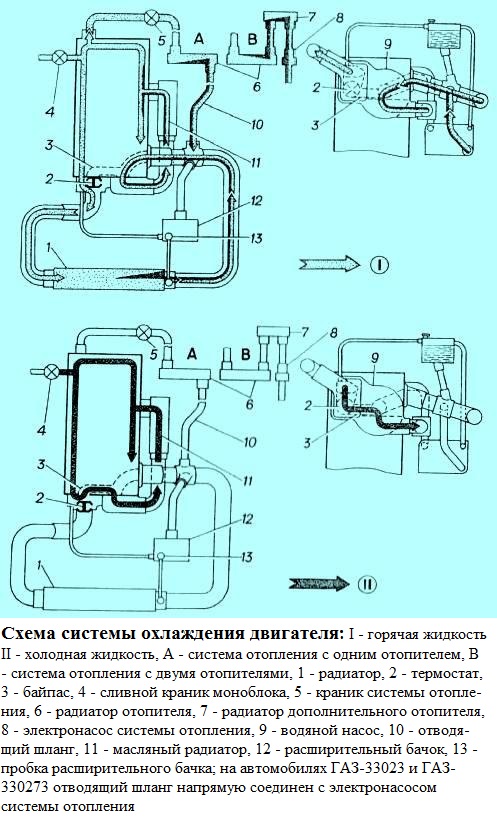 The fan drive belt is tensioned by an automatic tensioner.

Maintenance of the fan drive during operation is not required.

Installation of the fan drive belt on a vehicle without power steering is shown in Figure 1. 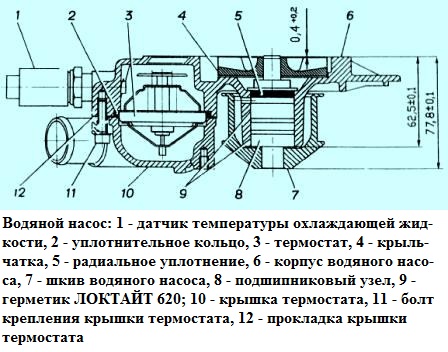 The water pump is centrifugal type, the pump housing is combined with the thermostat housing 3. The pump bearing is fixed with sealant 9 and separated from the coolant by a radial seal 5.

The bearing is lubricated for the entire service life and no additional maintenance is required during operation.

The EATON viscous coupling is used to turn off the fan in cases of sufficient cooling of the radiator by the oncoming air flow.

The fan switch-on is controlled by a bimetallic thermal converter located on the side of the coupling facing the radiator.

When the temperature in the radiator rises, the thermal converter heats up and opens the access of a special fluid to the working cavity of the coupling, while due to fluid friction, torque is transmitted from the drive disk to the slave disk, on which the fan is installed.