The car is equipped with a dry, single-disc, permanently engaged clutch with a hydraulically actuated release mechanism

The clutch consists of an aluminum crankcase, a release clutch with a bearing and a fork, a drive disk assembly (basket), a driven disk, a main and a working cylinder connected by a hose and a tube. 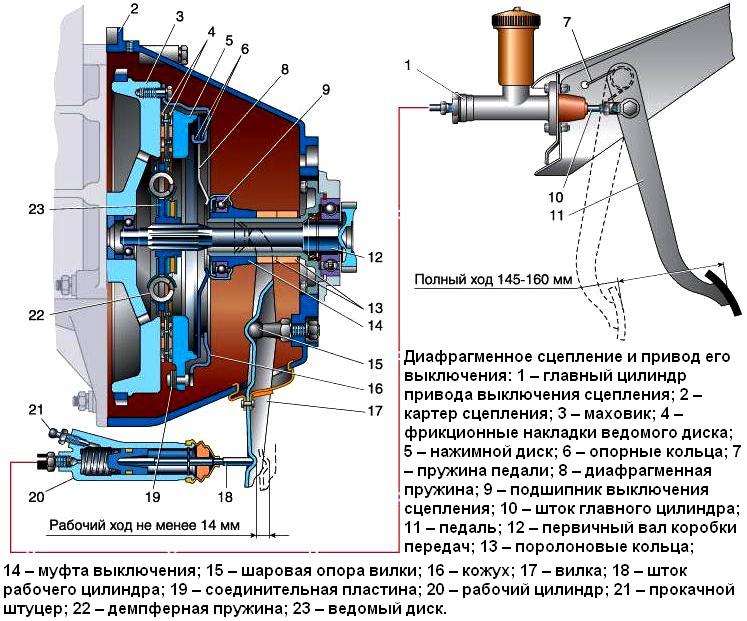 On vehicles equipped with ZMZ-406 and UMZ-4215 engines, only a diaphragm spring clutch is installed.

On vehicles with a ZMZ-402 engine, it is possible to install a clutch of both a diaphragm and a spring-lever type.

The driving disk (basket) consists of a casing in which a diaphragm spring, support rings and a pressure disk are installed.

A spring attached to the casing presses on the pressure plate with its edges.

The driven disc consists of a hub with a splined hole and two discs, one of which is riveted with leaf springs. Friction linings are attached to them on both sides.

Curved leaf springs help to better fit the disc and additionally smooth out jerks in the transmission when the clutch is engaged.

For a smoother transmission of torque when starting the car or shifting gears, damper springs are installed in the disc windows.

The driven disc is pressed against the engine flywheel by the pressure plate of the basket.

Through friction linings that increase friction, the torque is transmitted to the driven disk and then to the input shaft of the gearbox, with which the driven disk is connected by a spline connection.

The clutch release actuator is used to temporarily disconnect the engine from the transmission.

When you press the clutch pedal, the clutch master cylinder piston moves forward.

The displaced liquid enters the working cylinder through the tube and hose, pushing the piston with the rod out of it.

The rod acts on the shank of the fork, which rotates on a ball joint, moving the clutch release clutch along the gearbox bearing cover with the other end.

The clutch bearing presses on the ends of the petals of the diaphragm spring.

Deforming, the spring ceases to act on the pressure plate, which in turn “releases” the driven one, and the transmission of torque stops.

Outside, the clutch mechanism is closed with an aluminum crankcase with a stamped steel pan (lower part of the crankcase) (ZMZ-402, UMZ-4215).

The crankcase is attached to the engine block with six bolts and two amplifiers. On the other hand, four studs are screwed into the crankcase for attaching the gearbox.

The crankcase has a seat for the clutch slave cylinder and a window for installing the fork.

To increase rigidity, an amplifier is installed on the lower part of the clutch housing of the ZMZ-406 engine.

The driven disc differs from the lever-type clutch driven disc by the increased size of the friction linings (outer diameter 240 mm, inner diameter 160 mm, thickness 3.5 mm) and parts of the damper device, the number of springs and coupling fingers, as well as the shape of the leaf springs.

The diaphragm-type clutch is installed in the same crankcases with a lower hatch as the lever-type clutches for the ZMZ-4025, -4026 and UMZ-4215 engines, and for the ZMZ-4061 engine - in a solid bell-shaped crankcase.

To install it, instead of a lever-type clutch, the mounting holes on the flywheel are located as shown in the figure, and a washer with an outer diameter of 22 mm, an inner diameter of 11 mm and a thickness of 4.5 mm is installed under the ball joint of the clutch release fork.

Clutch cover 1 is fixed to the flywheel of the engine crankshaft with six centering special bolts.

The force of the pressure diaphragm spring 3 creates the necessary friction force on the surfaces of the friction linings and ensures the transmission of torque from the flywheel through the pressure plate 5, casing 1 and connecting plates 6 to the driven disk and the input shaft of the gearbox.

The pressure diaphragm spring is a disk truncated cone, which has twelve petals due to slots in the central and inner part, which act as clutch release levers.

The outer uncut part of the pressure diaphragm spring is clamped between two support rings 2, 4 by bending twelve antennae made on casing 1.

When bending them, the pressure spring on the special tool must be fixed in the square in good condition.

The support rings act as a hinge, relative to which the outer part of the diaphragm spring rotates when the ends of the petals are pressed.

The outer part of the diaphragm pressure spring rests on the annular protrusion of the pressure plate and presses it towards the flywheel.

Connecting plates 6 (three groups of three plates in a group) are riveted at one end to the projections of the pressure plate, the other - to the clutch cover. 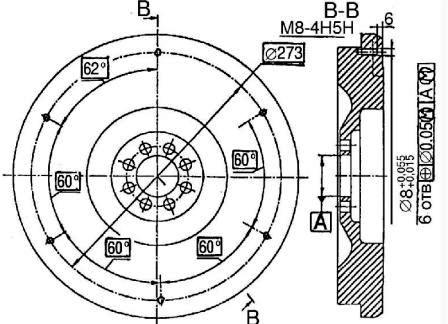 The casing with the pressure plate assembly cannot be repaired during operation; if it fails, it must be replaced.

To do this, it is necessary to fix the casing with the pressure plate assembly on the working surface of the new flywheel, placing three evenly spaced washers 8 mm thick between them.

The deviation from the position in one plane should be within 0.25 mm, if necessary, bend the petals.

When moving the ends of the petals by 8.5 mm, the offset of the pressure plate must be at least 1.3 mm.

Move the ends of the petals down by 10 mm and remove washers 3.

Measure the force at the ends of the petals, releasing them until the distance between the plane of the flywheel and the pressure plate is 6 and 8 mm.