The design of the cabin of the KAMAZ car

Model 5320 vehicles have a three-passenger cab without a sleeper, models 5410 have a sleeper cab

On dump trucks models 55111 and 55102, a cab without a berth, at the request of the customer, an average passenger seat can be installed, fixed, with a reclining back.

The cab has a sprung suspension that provides reliable isolation from the impact of the road.

For engine maintenance, the cab tilts forward. In the operational position, the cab is held by two lever-type locking devices.

A device for cleaning and washing windshields - with an electric drive, consists of an electric motor with a gearbox, rods and brushes, a tank with an electric pump located in the cab under the instrument panel, pipes, jets and control keys.

Natural ventilation through windows and door vents, a ventilation hatch in the roof, as well as a heating system operating from engine cooling systems with forced air supply to the feet of the driver, passengers, windshields and door windows. This allows you to set the optimum temperature in the cabin at any time of the year, and protect the windows from freezing.

The cabin is equipped with reliable multi-layer thermal and sound insulation and soft upholstery.

The driver's seat and the outer passenger seat are adjustable, which provides optimal conditions for the driver to work and the shift to rest. The cab has seat belts for all three cab seats.

In the modernized vehicles, the following changes have been made to the cab design:

At the request of the buyer, an aerodynamic visor can be installed and super graphics applied.

The body of the cab is all-metal, assembled by spot welding from stamped panels, pre-assembled into assembly units: base, front, two sides, rear and roof.

Moreover, cabins without a berth and with a berth are maximally unified with each other.

In the sleeper cab, only the roof is different, and sidewall extensions and the middle tailgate (the actual sleeper) are added.

All cabin panels are made of thin sheet steel with a thickness of 0.9 to 1.2 mm. The rigidity of the panels is ensured by the ribs stamped in the panels and the frame of the panels.

The cab is attached to the frame at four points by means of two front hinged supports and two rear sprung supports with a locking mechanism. 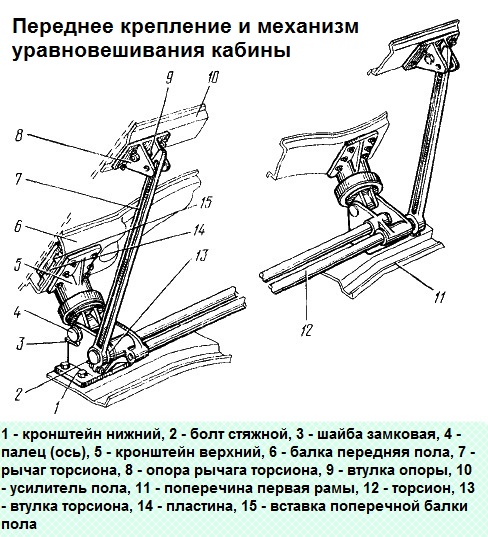 Front articulated supports (Fig. 1) consist of bottom brackets 1 bolted to the first cross member of the frame and top brackets 5 that are attached to the floor crossbeam.

The articulation between them allows you to tip overcab forward.

Two rubber o-rings are inserted into the hinge hole of the upper bracket, which prevent moisture and dirt from entering between the rubbing surfaces and retain lubricant.

Rubber pads are built into the top brackets to dampen vibrations transmitted from the frame to the cab via the front mounts.

Torsions 12 of the cab balancing mechanism are fixed in the lower brackets of the cab front attachment. 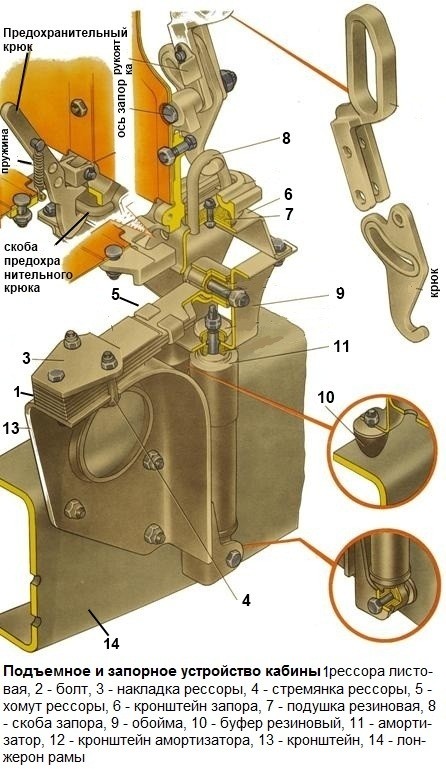 The rear cab mount (Fig. 2) is combined with a soft cab suspension and consists of two longitudinal leaf springs 1, which are attached to brackets 13, rigidly fixed to the frame side member 14, and two hydraulic telescopic shock absorbers 11, which are fixed to the lower lug on bracket, and the upper eye - in the cage 9 springs.

A bracket 6 of the locking mechanism is attached to the spring cage, to which the locking device attracts the cab.

The downward movement of the cabin is limited by a rubber buffer 10, which rests against the frame with a spring travel of more than 25 mm.

The cab tipping mechanism (see Fig. 2) is used to facilitate tilting the cab forward during engine maintenance and should provide almost complete balancing of the cab in any inclined position.

The cabin tipping mechanism consists of two interchangeable torsion bars 12, which are fixed with their square ends in the lower brackets I of the front supports, and with their splined ends freely installed in rubber bushings 13 of opposite brackets.

At the splined ends, interchangeable levers 7 torsion bars are fixed with tie bolts 2, which with their upper ends abut against bushings 9 supports 8 torsion bars.

Torsions in the transport position of the cab are twisted at an angle of 53º.

The cab tilts 42º and can be tilted 60º if needed (to remove the engine). To do this, release the cab tilt limiter extension.

Some car models have a mechanism for raising and lowering the cabin (Fig. 3) with hydraulic drive and manual control. 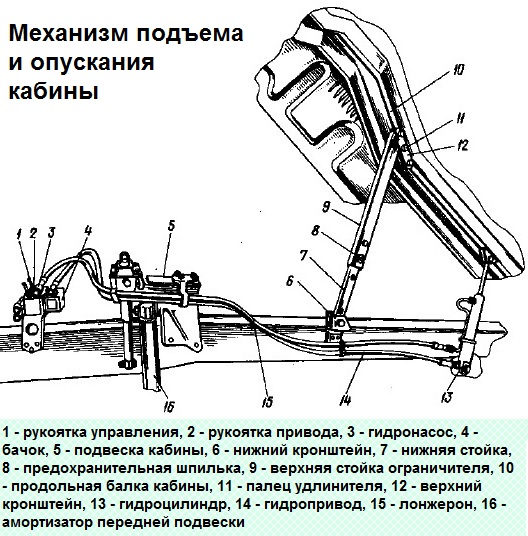 The mechanism consists of a hand pump with a reservoir, filters and rotary valves equipped with handles, a cabin lifting and lowering cylinder, oil supply pipes connecting the pump and the cylinder.

As a pump handle, a mounting spatula for tires or a wrench for a wheel wrench is used.

The pump for lifting and lowering the cab (Fig. 4) is of a plunger type, with a reservoir, mounted on a bracket located on the rear of the right front fender of the car. 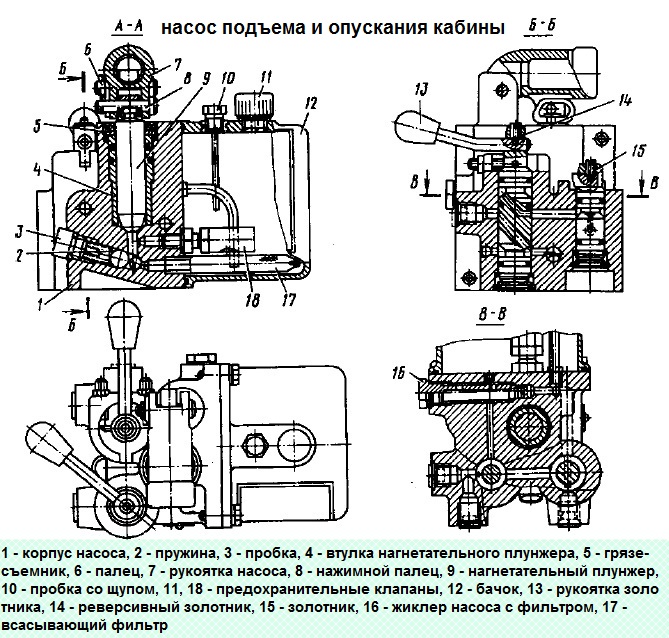 To limit the pressure in the system, a ball safety valve is provided that bypasses oil into the tank at a pressure of 15 MPa (150 kgf / cm 2).

There are threaded holes in the pump housing, to which the fittings of the oil supply pipes connected to the cylinder are connected through the elbows screwed into these holes.

Oil is supplied to the corresponding fittings by turning the handle 13 of the control spool in one direction or another until it stops.

The spool handle 14 has adjusting stops that are locked with nuts.

The cab is raised and lowered by turning the spool knob in the direction of the arrows: arrow up - raise the cab, down - lower.

For safety, when lowering the cab, the oil from the hydraulic system returns to the tank through jet 16 with a filter that prevents clogging of the system.

The cab raising and lowering cylinder (Fig. 5) is equipped with safety valves (Fig. 6). 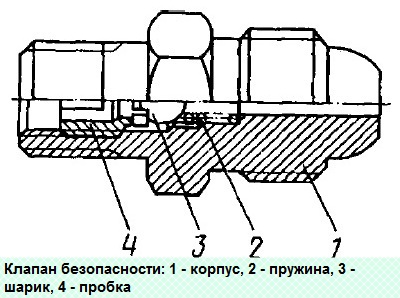 On the lift and op cylinder cockpit valves are installed on outlets closed with plugs.

Valves can also close if the oil supply is too sharp; in this case, to open the valve, the spool handles must be turned to the position opposite to the operation being performed (if the cab was lowered, then set the handles to the up position, and then to the previous position and continue lowering).

Cabin lift. Before raising the cab, you must brake the vehicle with the parking brake and set the gearshift lever to the neutral position.

Then it is necessary to turn the handles of both cab locks to the highest position and disengage the safety hook of the right lock.

To raise the cab to the first position (at an angle of 41º), set the handles on the pump to the "Cabin up" position and, swinging the pump handle with a mounting spatula, raise the cab.

To prevent accidental lowering of the cabin, it is necessary to fix the limiter posts with pin 17.

To lower the cab, remove the locking pin, set the handles on the pump to the “Lower cab” position and, swinging the pump handle with a mounting spatula, lower the cab.

Then, use the hydraulic lift to raise the cabin to the second position.

The cab tilt limiter (Fig. 7) is located on the right side of the cab. 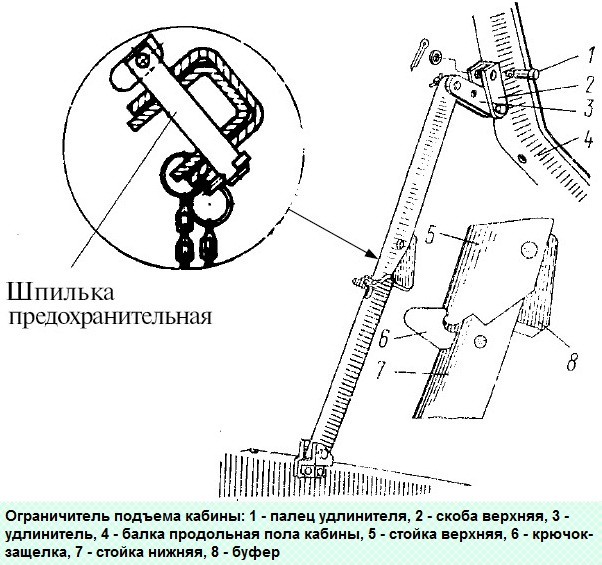 The lower rack 7 of the limiter rotates in a bracket attached to the right side member of the frame.

The top rack 5 is fixed through the extension 3 in the bracket 2 fixed on the longitudinal beam 4 of the cabin floor.

When the cab is raised, both posts create a stop that prevents spontaneous lowering of the cab.

To prevent accidental folding of the limiter, there is a safety hook-latch 6 between the lower and upper posts.

When lowering the cab, you need to pull this latch and push the limiter towards you.

For cabs with hydraulic lift, a safety pin is used instead of a latch hook (Fig. 7).

The cab locking mechanism (Fig. 8) fixes the cab on the rear supports in the transport position and consists of two mechanical locks with a safety hook on the right locking device. 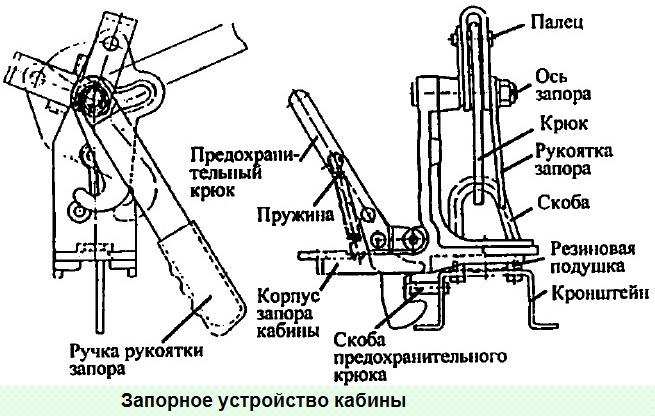 When fixing the cab, the body with its groove enters the bracket welded to the bracket fixed on the spring clip, and the hook engages with the bracket.

The design of the hook ensures that when closing the lock, the lock body is pulled up to the rubber cushion on the bracket bracket.

The safety hook snaps into the bracket automatically with the help of a spring.

To open the lock before tilting the cabin, turn the handles of both locks from the lower position towards you, to the upper position, while the hook disengages from the bracket, then disengage the safety hook.