The car has a dual-circuit brake system

Scheme of the working brake system is shown in the figure

The drive of the system is hydraulic. To facilitate the control of the drive, a vacuum booster is installed on the car. 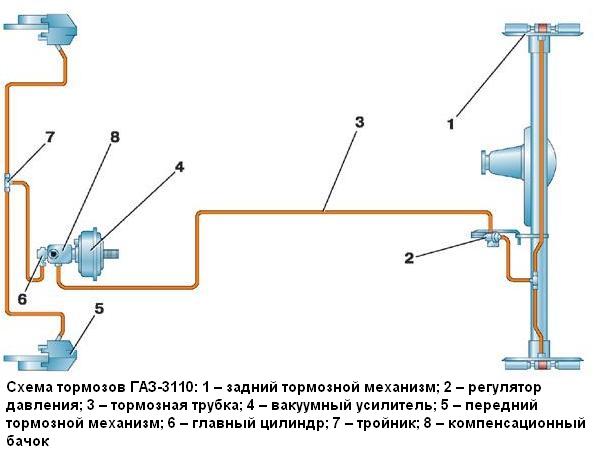 The front brakes are disc and the rear are drum.

The front brake discs are ventilated. They are mounted on hubs and fastened with wheel bolts.

The floating caliper is bolted to the steering knuckle with two bolts.

The brake mechanisms of the front wheels are disc, with a single-piston floating caliper (when braking, the piston presses the inner pad against the disc, and the caliper, moving in the opposite direction, presses the outer pad).

The minimum allowable thickness of the front brake pads when worn is 3 mm.

The discs are ventilated, mounted on the hubs and attached to them with wheel bolts.

The minimum allowable disc thickness when worn is 19 mm. The bracket is attached with two bolts to the steering knuckle.

The brake cylinder is made in the caliper housing; on the outside, it is covered with a rubber boot (dust boot) to protect it from dirt.

Inside the cylinder there is a groove into which an o-ring (cuff) is inserted.

When the piston moves out of the cylinder during braking, this ring twists slightly and, after braking, tends to return the piston to its original position.

This maintains a constant minimum clearance between discs and brake pads. The cylinder has a bleed valve.

To protect the working surfaces of the disc, a brake shield is installed that prevents the ingress of dirt and moisture, and also provides cooling for the disc.

Brake mechanisms of the rear wheels drum, with two-piston wheel cylinders with automatic adjustment of the gap between the pads and the drum.

Thrust rings are inserted into the cylinder with an interference fit, limiting the free travel of the pistons (after braking), thereby maintaining a constant gap between the pads and the drum.

As the pads wear, the rings shift by the amount of wear. In the lower hole of the brake pads there are eccentrics for adjusting the position of the pads after replacing them.

The minimum allowable thickness of the rear brake pads when worn is 1 mm.

Maximum allowable inner diameter of the brake drum is 283 mm.

The rear brake shoes are actuated by a single double-acting wheel cylinder.

The connection of the thrust rings inserted with an interference fit into the cylinder and the pistons acts as an automatic device that maintains a constant gap between the friction linings of the pads as they wear out and the working surface of the drum when the rear brake is not locked.

Due to the rarefaction in the engine intake pipe, the vacuum booster during braking creates an additional force on the pusher of the brake master cylinder piston in proportion to the force on the pedals.

The vacuum booster is located between the pedal assembly and the main brake cylinder and is attached to the bracket with four studs.

The amplifier is of a non-separable design; in case of failure, it is replaced.

The simplest check of its serviceability is as follows: on a car with the engine turned off, press the brake pedal several times and, keeping the pedal depressed, start the engine.

If the amplifier is working properly, after starting the engine, the pedal should “go” forward.

Failure or insufficient efficiency of the vacuum booster may be caused by a leak in the suction hose from the intake manifold.

An adjusting bolt with a locknut is screwed into the front end of the booster pusher, providing the required clearance for the correct operation of the master brake cylinder. 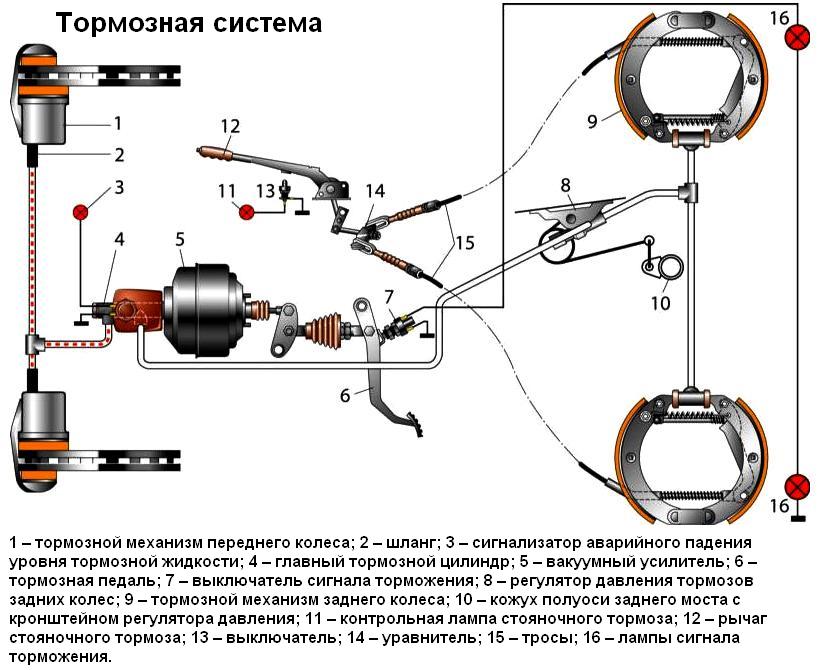 The main brake cylinder is attached to the vacuum booster housing with two studs.

A translucent polyethylene brake reservoir with a sensor is inserted into the holes in the upper part of the cylinder ohm insufficient liquid level (in the reservoir cap).

A plug is screwed into the front of the cylinder (along the direction of the car), which serves as a stop for the return spring and is sealed with a copper gasket.

Pistons in the master cylinder are arranged in series, the one closest to the vacuum booster actuates the rear brakes, the other piston - the front.

The sealing rubber rings (cuffs) of the main brake cylinder are not symmetrical in cross section, so it is important to orient them correctly during assembly.

When disassembling the cylinder, it is recommended to replace the cuffs, regardless of their condition.

When installing the master cylinder on a vehicle, check the gap (1.35–1.65 mm) between the end surface of the vacuum booster housing and the adjusting bolt.

If the gap is different from the specified, unscrew the lock nut and, by turning the adjusting bolt, achieve the desired gap, then tighten the lock nut.

A brake fluid level sensor is installed in the reservoir cap. The lamp that lights up from his signal indicates that the tightness of the brake system is broken.

Pressure regulator when braking, adjusts the pressure of the brake fluid in the wheel cylinders of the rear brakes, while eliminating the possibility of blocking the rear wheels before the front.

The regulator is fixed to the bottom of the body and reacts to the load of the rear axle through the load spring.

The pressure regulator is bolted to a bracket at the rear of the body with two bolts.

It prevents earlier blocking of the rear wheels in relation to the front ones, which increases the directional stability of the car when braking.

Responding through the load spring to the loading of the rear axle, it limits the fluid pressure in the rear brake circuit. The regulator is not repairable - in case of failure it is replaced.

After replacing the adjuster or elements of the rear suspension, it is necessary to re-adjust the position of the load spring relative to the rear axle.

It consists of a lever (with a handle and a locking mechanism), an intermediate lever and its rod, an equalizer and its rod, cables, a drive lever with a rod in the rear brake mechanisms.