Maintenance of the K-151 carburetor

- an autonomous idling system in the primary chamber with quantitative adjustment of a mixture of constant composition with a forced idling economizer (EPCH),

- econostat with output to the secondary chamber,

- a semi-automatic system for starting and warming up the engine with manual control.

In addition, the carburetor is equipped with a float chamber ventilation valve. 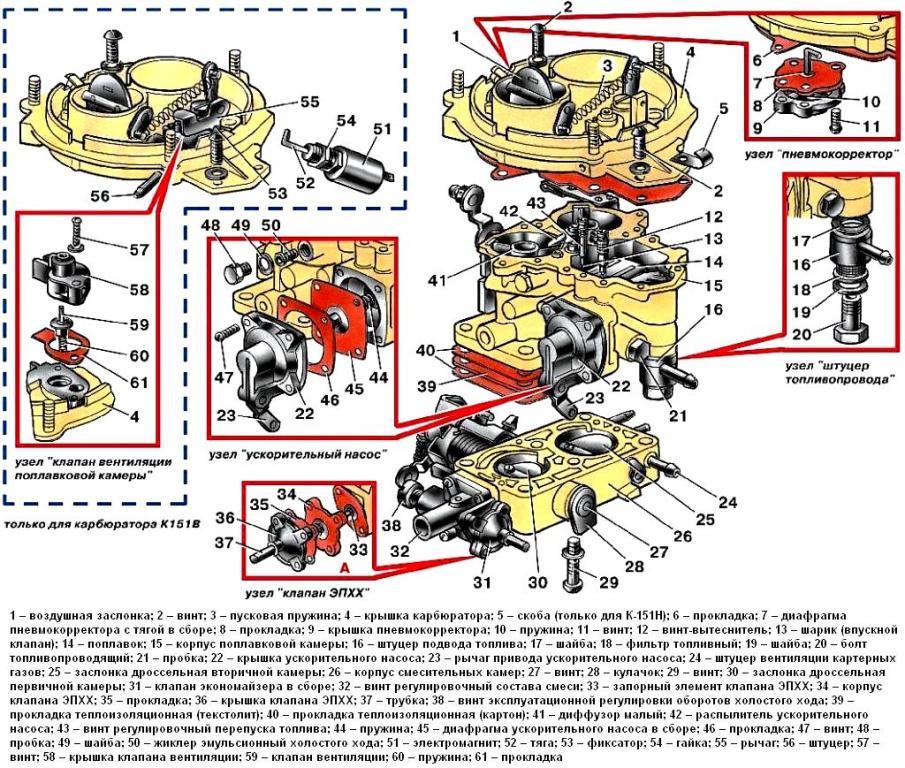 Check the fuel level with the car engine off, installed on a horizontal platform and the carburetor cover removed. 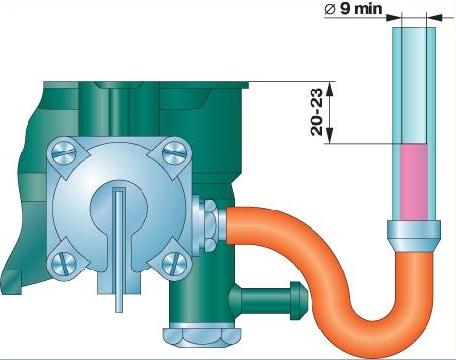 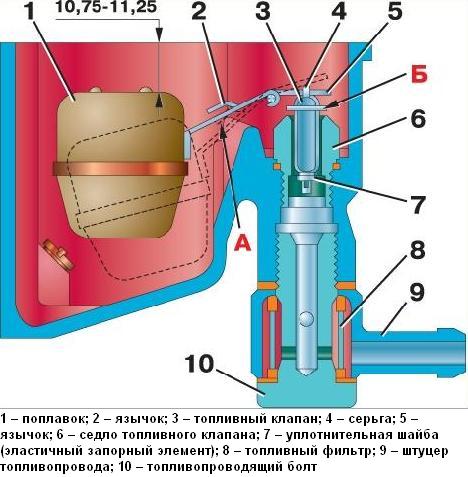 The fuel level (Fig. 2) must be within 20–23 mm from the plane of the float chamber connector. To check it, it is necessary to screw in a fitting with a thread M 10xl–6g to connect a rubber hose.

The fitting is screwed into the float chamber instead of the drain plug. The fuel level is determined through a transparent tube with an inner diameter of at least 9 mm.

The level is adjusted by bending tab 5 of the float loop (Fig. 3) to a size of 10.75–11.25 mm between the upper part of the float and the plane of the float chamber connector (the float must be raised to its highest position).

In the lowest position, the float should not touch the walls of the float chamber, and its tongue 2 should be on stop A. In this case, the stroke of the valve 3 should be equal to 1.5 + 0.5 mm.

The stroke of the valve is adjusted by bending the tab 2 of the float loop.

After adjusting, check the fuel level again and re-adjust if necessary. If the adjustment does not give the desired result, it is necessary to check the float mechanism.

Usually, the causes of an increased or decreased fuel level in the float chamber are the asymmetry of the float, its incorrect weight, as well as a stuck or leaky fuel valve.

The tightness of the float is checked by immersing it in water heated to 80–85°С with a time delay of at least 30 s.

The mass of the float assembly with the loop after repair should not exceed 13 g. If the fuel valve is leaking, replace the sealing washer 7.

After replacing the sealing washer, when assembling valve 3 with earring 4, it must be taken into account that the earring must be installed in such a way that the protrusion of earring B is directed in the direction opposite to the float.

During vehicle operation, the minimum idle speed is adjusted by turning the service adjustment screw.

When unscrewing the screw, the speed increases, when tightening, it decreases.

Full adjustment of the carburetor is carried out at a service station (using gas analysis equipment) and must be carried out conducted under the following conditions:

- with adjusted gaps in the gas distribution mechanism;

– when the air damper is fully open.

1. Adjust the operating adjustment screw to the minimum idle speed.

2. Adjust the mixture composition screw to the content of carbon monoxide (CO) within 1.0–1.5%, after removing the restrictive sleeve.

The content of hydrocarbons (CH) should not exceed 1000 ppm–1.

3. Make sure that the selected position of the screws ensures normal operation of the engine during regassing, for which open the throttle and release it sharply.

If at the same time engine stops or unstable operation are noted, then it is necessary either to increase the minimum speed by unscrewing the operational adjustment screw, or to enrich the mixture with the mixture screw.

The maximum allowable CO content is not more than 2%.

After the final adjustment, install the restrictive sleeve on the mixture adjusting screw and mark its position.

Warm up the engine to a coolant temperature of 80–85°C and check the CO content in the exhaust gases at idle speed.

The CO content should not be more than 4.5% at any position of the toxicity screw, which allows you to install the restrictive sleeve.

Set the screw with stop sleeve to the marked position.

It is not allowed to adjust the minimum speed of the crankshaft using the screws for slightly opening the throttle valves.

A valve failure will increase fuel consumption and make it difficult to start a hot engine.

Rinse carburetor parts with benzene or unleaded gasoline, then blow with compressed air.

Do not use metal wire to clean jets and calibrated holes, as this will lead to a violation of their size and throughput.

In order not to confuse the jets during installation, you should pay attention to their marking.

Each jet is labeled with the nominal flow rate in ml/min.

Marking applied by impact method on the head of the jet (from the side of the slot).