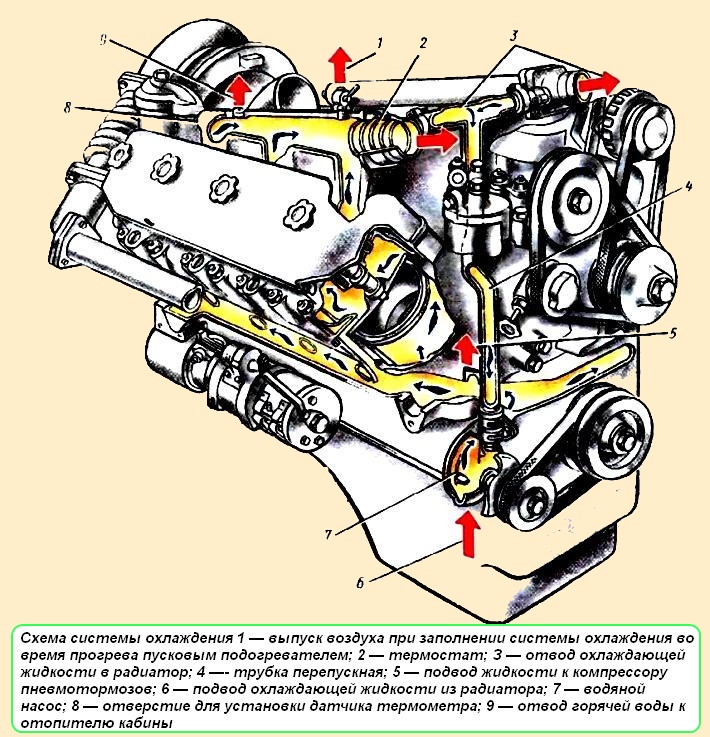 When the engine is running, the circulation of coolant in the cooling system is created by a centrifugal pump.

The pump takes fluid from the lower radiator tank and pumps it through channels in the distribution gear cover into the right and left water jackets of the cylinder block.

Here, the liquid washes the outer surface of the cylinder liners, absorbing heat, heats up, then from the cylinder block enters the water jackets of the cylinder heads and, first of all, to the most heated places of the exhaust valves and nozzle cups.

From the cylinder head cooling jacket, the liquid enters the water collection pipes, and from them through the passages in the thermostats to the radiator, where it transfers heat to the air flow created by the fan. The liquid cooled in the radiator again flows to the water pump.

Water Pump (Figure 2). Vane, centrifugal type - to prevent liquid from entering the cavity with lubrication, a cuff 8 made of oil and petrol resistant rubber is installed, which is pressed against the shaft with clips, and with a spring against the textolite thrust ring 6. 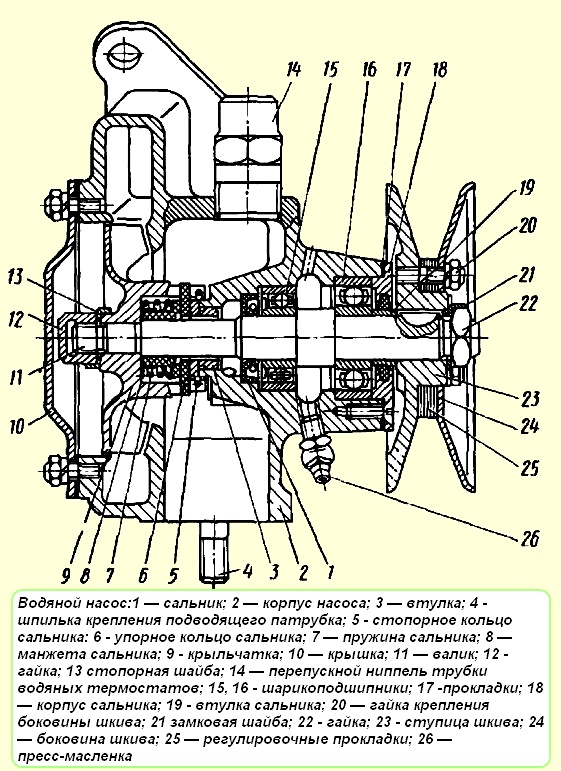 A plug with a steam-air valve is installed on the expansion tank. The outlet valve of the plug opens at an excess pressure of 0.5 kgf / cm2, which corresponds to boiling water at about 119˚ C.

The inlet valve of the plug opens when the pressure in the system drops to 0.13 kgf/cm2. 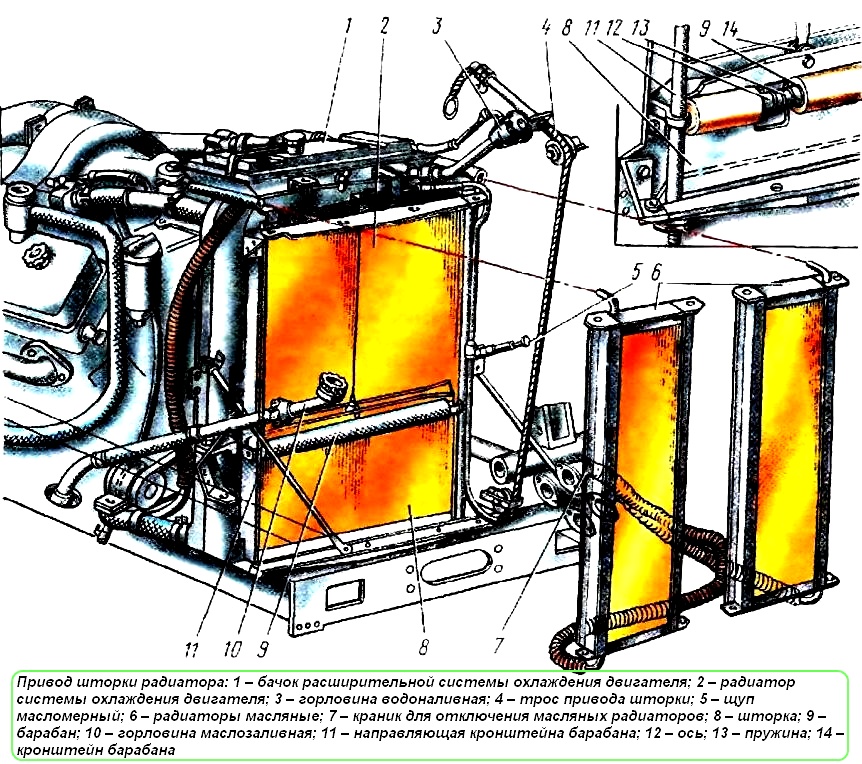 Thermostats - They serve to accelerate the warm-up of a cold engine and protect it from hypothermia on the road.

When the temperature of the cooling system fluid drops to 70˚ C, thermostats automatically direct all of its flow directly to the water pump through the so-called small circle of circulation, bypassing the radiator, and thereby create favorable conditions for its rapid heating.

The radiator shutter can be fixed in any intermediate position and is controlled from the driver's cab.

The fan is six-blade, gear-driven and rotates in the radiator casing.

To ensure the normal operation of the cooling system, it is necessary:

Checking the system for leaks

A significant part of the malfunctions in the cooling system occurs due to coolant leakage.

The most likely places for leakage are water pump seals, hose connections with pipes and radiator pipes with its tanks, as well as drain cocks.

The tightness of the cooling system should be checked daily.

If the stuffing box seal of the water pump impeller is defective, fluid will flow out through the drain hole on the housing, which will protect the pump shaft bearings from destruction.

It is not allowed to stop the leakage of fluid from the pump by blocking the drain hole. A pump with a defective stuffing box must be repaired.

Leakage at the junction of the hoses is eliminated by tighteningoh clamps, and if the hoses are damaged, replace them.

Adjust the tension of the water pump drive belt. A normally tensioned belt, when pressed with the thumb on the middle of the belt with a force of 3 kgf, should bend by 10 - 15 mm.

Shims should not be removed from the pulley, because when replacing the old belt with a new one, all the shims must be reinstalled between the hub and the removable pulley sidewall.

Belt slippage can occur due to oil getting on it. In this case, the oily belt is wiped with a rag slightly moistened with gasoline.

In order to remove scale, rust and sediment, the cooling system must be flushed. When scale deposits are light, a flush gun can be used for flushing.

Before flushing the radiator, make sure that it is not clogged, otherwise a strong jet of water may cause damage to the radiator.

When flushing, the radiator hoses are disconnected from the engine and, with the plug closed, water is first brought to the upper radiator pipe to remove the dirt accumulated in the lower tank, and then the direction of the water flow is reversed and washed until the water coming out of the upper tank the water will not be completely clean.

Scaling from the cooling system is removed with a solution of technical Trilon B (TU 6431-71) in water (20 g of Trilon per 1 liter of water).

Trilon is a white powder, non-toxic, easily soluble in water, does not cause foaming of water when it is heated and boiled. Excessive amount of trilon does not harm the parts of the cooling system.

The Trilon solution is poured into the cooling system.

After 1 day of engine operation (at least 6 - 7 hours), the spent solution is drained and fresh is poured. Flushing continues for 4 - 5 days.