The cylinder head studs are screwed into the right and left rows of the cylinder block, having previously lubricated the threaded holes for the studs in the block with diesel oil

The mating surface must be wiped before installing the cylinder head.

We install the cylinder head gasket on the studs so that it is installed on the pins, and the gasket edging is on the shoulders of the cylinder liners.

The cylinder head assembly must be freely, without shock, installed on the studs and dowel pins.

Then we screw the cylinder head nuts onto the studs and tighten them. 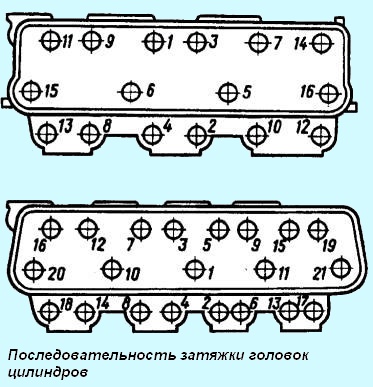 Tighten the nuts in ascending order of numbers (see Fig. 2).

After the first tightening with a torque wrench, it is necessary to repeat the operation to check the required torque of 220-250 Nm (22-25 kgcm) on each nut, following the sequence indicated.

The push rods are installed in the windows of the cylinder block and at the same time the tip of the rod is combined with the fifth pusher.

The rod is preliminarily wiped and the tip is lubricated with diesel oil.

The right and left rocker arms with axle assembly are installed so that the axle dowel pins fit into the cylinder head holes and the adjusting screw sphere is aligned with the rod tip.

The adjusting screw must be screwed into the rocker until it stops.

Then screw the rocker axle mounting bolts into the cylinder heads and tighten them with a torque of 120-150 Nm (12-15 kgcm). 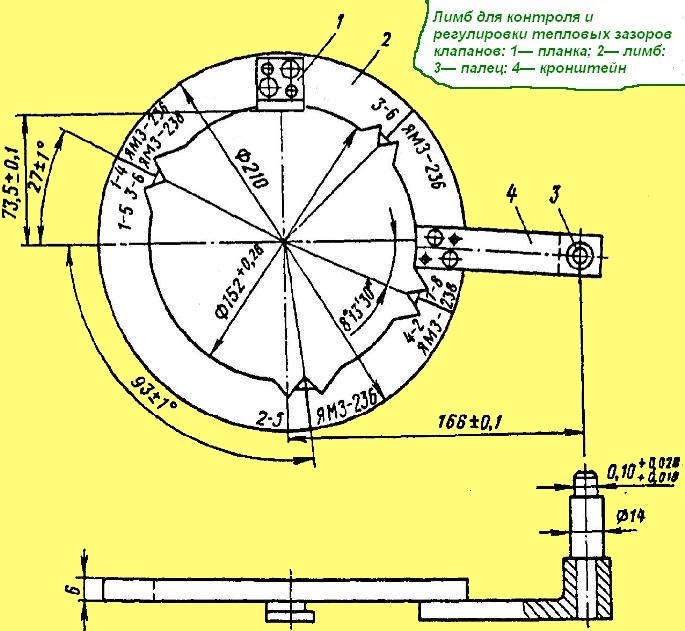 The valve clearances are adjusted simultaneously on two cylinders and a dial is used at the same time (Fig. 4).

The limb is installed on the crankshaft pulley, and the pin Z is inserted into the threaded hole on the distribution gear cover.

The thermal gaps of the YaMZ-326 engine are adjusted in the following sequence:

- rotate the crankshaft clockwise with a key for the pulley mounting bolt, observe the movement of the intake valve of the first cylinder and set the moment when it closes completely.

After that, the shaft is turned in the same direction until the risks on the crankshaft pulley are aligned with the mark 1-4 YaM3-236 on the limb;

- adjust the gaps between the toes of the rocker arms and the ends of the valves of the first and fourth cylinders.

After tightening the locknut of the adjusting screw, the 0.25 mm thick feeler gauge should freely enter the 0.30 mm gaps - with force.

When adjusting the thermal clearances of the YaMZ - 238 engine, the same techniques and methods are used as for the YaMZ - 236 engine:

The push rods of the control valves must be free to rotate by hand.

The gap is adjusted using the adjusting screw; after adjustment, securely fasten the screw with a nut and check the clearance.

A set of nozzles of the same spray group is installed on the engine.

Atomizer group is applied to the surface of the nozzle body.

Before installing the nozzles, wipe the inner surface of the glasses, and put one sealing copper washer on the atomizer.

Injectors are installed in such a way that the nozzle seal fits into the cylinder head recess.

The injector mounting brackets are installed on the cylinder head studs, washers are put on and nuts are screwed, which are tightened with a torque of 50-60 Nm (5-6 kgf m).

The drain tubes are installed on the left and right cylinder heads, having previously unscrewed the transport plugs from the injectors.

Drainage tubes are attached to the nozzles with connecting nuts and bolts, having previously placed washers under the tips of the tubes and under the bolt heads.

To ensure a reliable seal in all cases, it is necessary to orient the washers with the tops of the cones from the tips of the tubes outward.

The fuel return lines are installed in the camber between the cylinders and bolted to the right and left cylinder heads.

To ensure a more rigid fastening, a clamp is installed on each fuel line and fastened to the stud of the flange of the left inlet pipeline.

The connection diagrams of the pump sections with the cylinders of the YaMZ-236 and YaMZ-238 engines are shown in fig. 5.

The inlet pipe connecting pipe is installed so that the flange for the compressor air duct is directed towards the front of the cylinder block.

The branch pipe is attached to the flanges of the inlet pipelines, having previously placed gaskets with mesh assemblies and rubber gaskets on the flanges and fastened it with bolts and washers.

The oil dipstick is installed in the guide tube after wiping it.

Then, the cylinder head covers are installed, which are fixed with screws on one or two threads and the engine is removed from the stand.

They install plugs on technological holes and fasten them with bolts.

It is necessary to install cardboard spacers under the plugs.

The running-in and testing of engines after repair is carried out on stands STE-160-1500 with electric brakes.

The YaMZ-236 and YaMZ-238 engines of all modifications can be tested on these stands.

Characteristics of electric brakes for test benches are given in the table.

The engine burn-in and test stand must have the equipment necessary to measure engine power, crankshaft speed, hourly fuel consumption, engine water temperature (from the right and left water pipes), oil temperature in the engine sump, pressure oil in the line, the fuel injection advance angle in degrees of the crankshaft angle.

The capacity of the supply tank should be 10 - 12 liters, the level of the bottom of the measuring tank should not be lower than 500 mm from the axis of the inlet of the fuel priming pump, the inner diameter of the inlet and outlet fuel lines should be at least 8 mm.

Fuel lines must not touch the measuring tank and must be immersed in fuel to a depth of no more than ⅓ of the height of the tank from its bottom.

A reflector is installed at the submerged end of the fuel line that removes fuel from the engine, preventing the direct direction of the fuel jet on the bottom of the tank and helping to equalize the temperature of the fuel in the tank.

The engine installed on the stand must be fully equipped (with the exception of the fan impeller, generator, compressor).

The running-in and testing of the engine is carried out on diesel fuel grade "L".

For the period of running-in, diesel oil is poured into the engine sump, injection pump housing and regulator housing up to the upper marks of the oil level indicators.

The oil temperature is maintained with the help of technological oil coolers (at the beginning of the break-in, not lower than 50˚ C).

The running-in and testing of the engine is carried out in special modes and includes cold and hot running-in, control acceptance.

Before starting the stand, the crankshaft must be manually rotated several times to make sure that the engine is in good condition and that it is correctly installed on the stand, check and, if necessary, adjust the thermal clearances in the valve mechanism.

During the break-in process, the oil pressure in the system, the oil supply to the rocker arm bearings and the tightness of the nozzle seal in the cylinder heads are checked.

Noises and knocks of timing gears, connecting rod and main bearings, piston pins and pistons are heard with a stethoscope.

If defects are found, the running-in should be stopped, and after elimination it should be continued.

Cold running mode is shown in the table.

At the end of the cold break-in, it is recommended to change the oil in the engine sump and wash the oil filters. 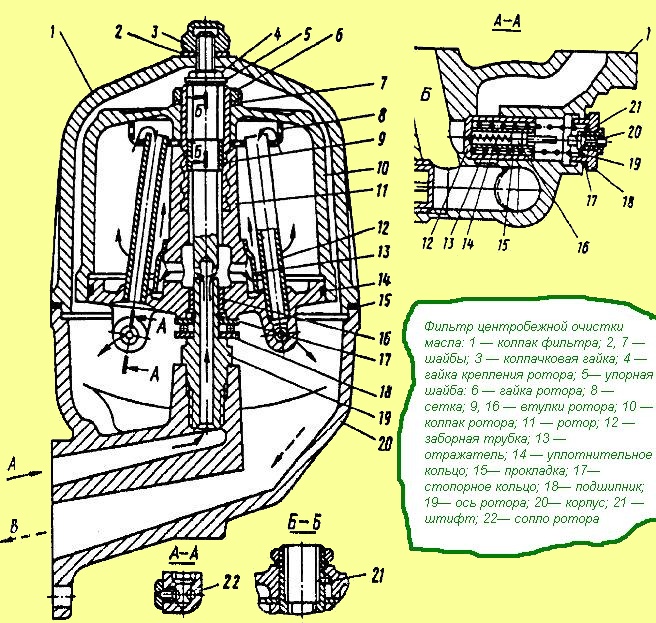 To wash the rotor of the centrifugal filter, unscrew the nut 3 (see Fig. 6) of the filter cap, remove the cap 1 and the rotor assembly.

The rotor is disassembled, the sediment is removed from the cap 10 and the rotor 11, they are washed in diesel fuel.

To wash the coarse oil filter, drain the oil from the Filter Housing through the hole closed with plug 2 (see Fig. 7), unscrew the bolt 11 of the Filter cap, remove cap 7, top cover 8 and filter element 5.

The filter element removed from the engine is placed in a bath with a solvent (gasoline or carbon tetrachloride) for 3 hours.

After 3 hours, the element is washed with a soft hair brush, rinsed in pure gasoline or carbon tetrachloride and blown with compressed air. 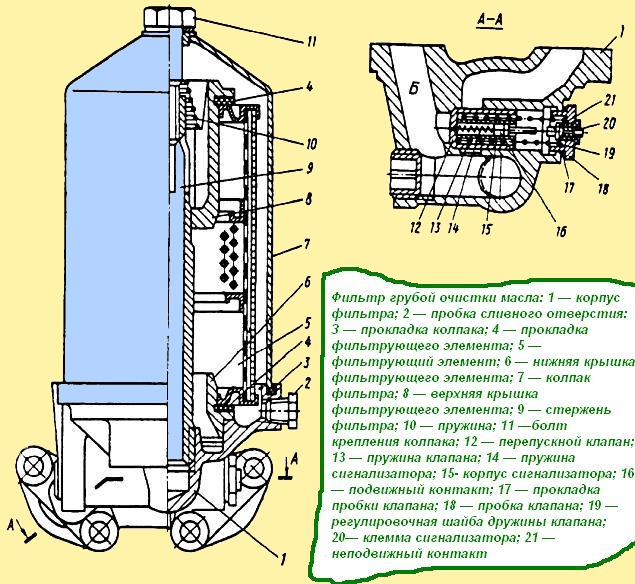 Before starting the engine, it is necessary to adjust the fuel injection advance angle.

To do this, check the relative position of the marks on the fuel injection advance clutch and the drive half-coupling of the fuel pump drive shaft (the marks should be on one side);

After making sure that the regulator bracket is in the fuel supply position, pump fuel into the engine power system with a manual booster pump for 2-3 minutes and rotate the engine crankshaft clockwise (when viewed from the fan side) until fuel appears in the glass tube .

At the moment the fuel level begins to move in the tube, the rotation of the shaft is stopped and the relative position of the marks is checked:

For the YaMZ-238K engine, adjustment risks are combined with risk 14.

If at the moment the fuel begins to flow in the tube, the risks have not yet aligned, loosen the bolts, turn the drive shaft coupling on its flange against the direction of its rotation, tighten the fastening bolts and check the injection advance angle setting again.

Mismatch of marks should be no more than one division.

If at the moment the fuel begins to move in the risk tube has already passed the combined position, the drive shaft coupling must be turned in the direction of its rotation.

The displacement of the drive shaft coupling relative to its flange by one division corresponds to four divisions on the flywheel or distribution gear cover.

After starting the engine, check the tightness of all connections in the engine fuel system.

It is recommended to maintain the temperature within the specified limits using a technological radiator.

The ejection and leakage of oil, water and fuel, as well as the breakthrough of gases at the joints are not allowed. 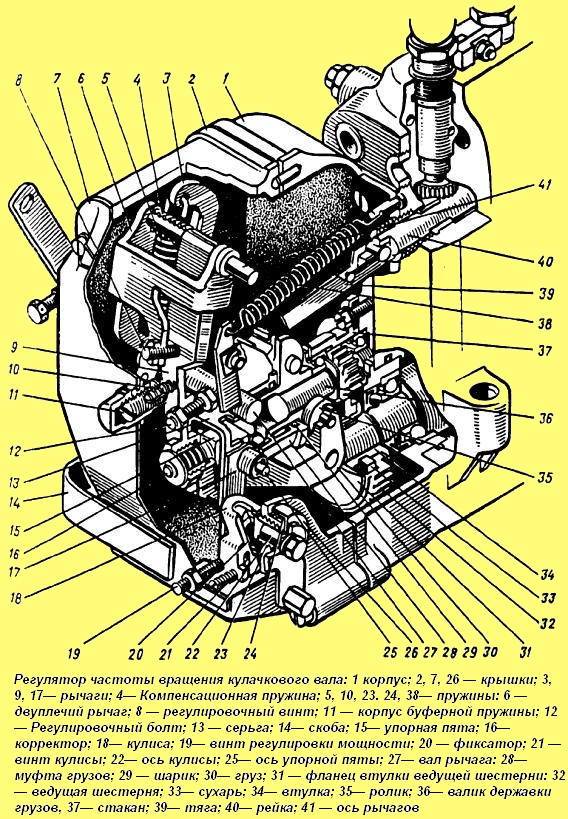 The signs of marriage are not sweating, the formation of oil stains and individual drops in the places of stuffing box seals, with a fall of no more than one drop within 5 minutes, in any mode of engine operation;

It is allowed to release individual drops of the fuel-oil mixture from the exhaust pipe during the break-in period. 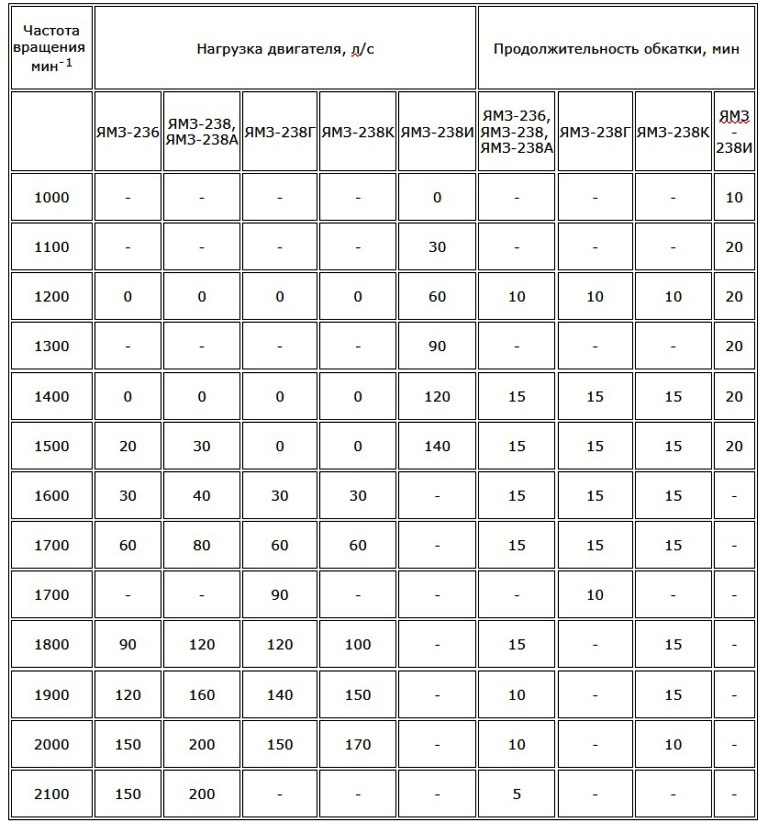 At the end of the hot run-in, check and, if necessary, adjust the engine power.

The largest difference of repeated measurements should be no more than ±0.2 s relative to the average value of the time obtained as a result of all measurements.

The engine power is adjusted using the power adjustment screw 19 (see Fig. 9) at the crankshaft speed indicated above for each engine and the governor control lever rests against the maximum speed limit bolt.

The minimum speed of the crankshaft in idle mode is adjusted within 450-550 min1, with the control lever of the regulator against the bolt.

When the bolt is screwed in, the frequency increases, when it is screwed out, it decreases.

First, the speed is gradually reduced until instability appears, and then the body of the buffer spring is screwed in until the speed is increased by 10-20 min1.

The engine must operate stably in idle mode with fluctuations of no more than 15 min-1.

Stability in this mode is checked by increasing the crankshaft speed to 1200 - 1300 min1 and abruptly resetting the lever to the stop bolt 1.

After that, tighten the cylinder head nuts and, if necessary, adjust the valve clearances.