Model 182 diaphragm clutch (Fig. 1) consists of driving and driven parts, as well as parts of the clutch release mechanism installed in the clutch housing

The leading part of the clutch - pressure plate 2 with a casing is mounted on the engine flywheel and fastened with M10 bolts (12 pcs.) On a diameter of 450 mm.

Centering is carried out on a cylindrical groove with a diameter of 475 mm on the flywheel and clutch cover.

To prevent rotation of the diaphragm spring relative to the casing and pressure plate, 6 pairs of bushings with special brackets are installed.

The use of these brackets allows you to maintain constant contact between the pressure plate and the spring and ensure that the first one leaves when the clutch is released. 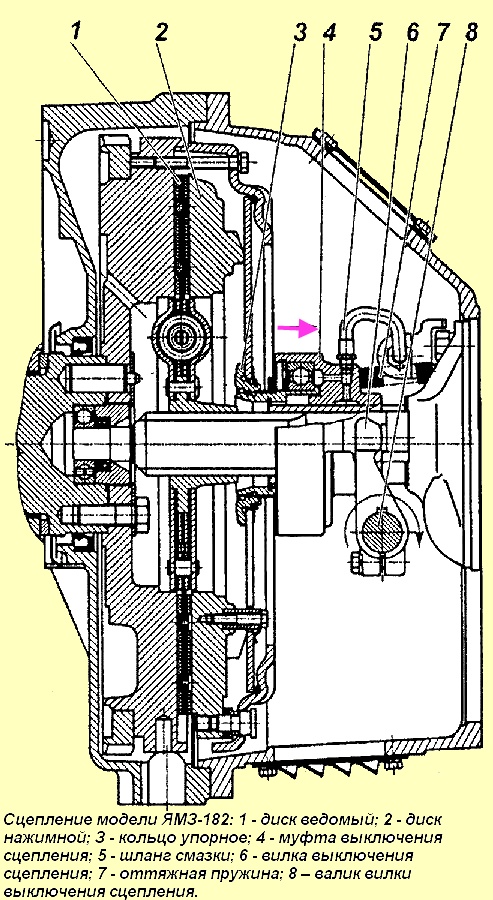 Driven disc 1 is installed between the flywheel and the pressure plate and is centered on the splines of the gearbox input shaft.

In clutches of this type, a driven disk with a spring-friction type damper with elastic fastening of one of the friction linings is used.

Thanks to this, the clutch reduces the dynamic loads on the transmission during sudden starts (starting off, shifting gears), and also eliminates resonance phenomena and reduces the maximum “peak” torque values ​​\u200b\u200bduring steady vehicle movement.

The fastening of the friction linings is shown in fig. 2.

The clutch release mechanism consists of a clutch 4 (Fig. 1) with a bearing, a fork 6 and a roller 8. The clutch is connected through a thrust ring 3 to a diaphragm spring using a locking device. 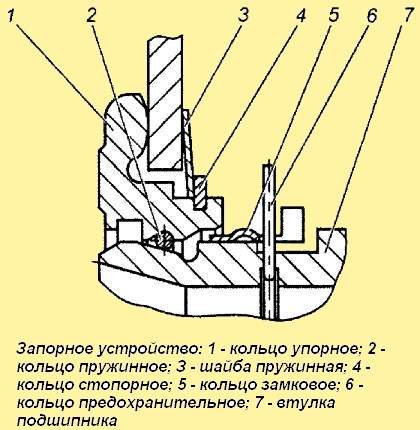 The design of the locking device is shown in fig. 3.

It includes a thrust ring 1, a clutch bearing bush 7 with a shaped groove, an O-ring 2, and a locking ring 5.

The thrust ring 1 is installed on the diaphragm spring when assembling the pressure plate with the casing and is held by the spring washer 3 and the retaining ring 4. In the figure, the clutch is locked (connected) to the thrust ring.

Inside the sleeve of the clutch bearing 7, a safety ring 6 is installed, which has a protruding mustache on the outside, preventing the disconnection of the clutch release clutch and thrust ring 1.

The clutch is disengaged by turning the shaft clockwise.

The permissible direction of movement of the clutch and rotation of the shaft to disengage the clutch is shown in fig. 1 arrows. Moving the coupling and turning the shaft in the opposite direction is not allowed.

Clutch slip is detected during gear shifting, when the vehicle speed does not increase after releasing the clutch pedal and a sharp increase in engine speed.

Lubrication is supplied to the coupling through the hose lubricator until grease appears in the gap between bearing sleeve and deflector.

The frequency and procedure for monitoring and adjusting the clutch actuator is determined by the vehicle operating manual.

Removing the clutch from the engine

Remove the clutch from the engine with the gearbox installed in the following order: 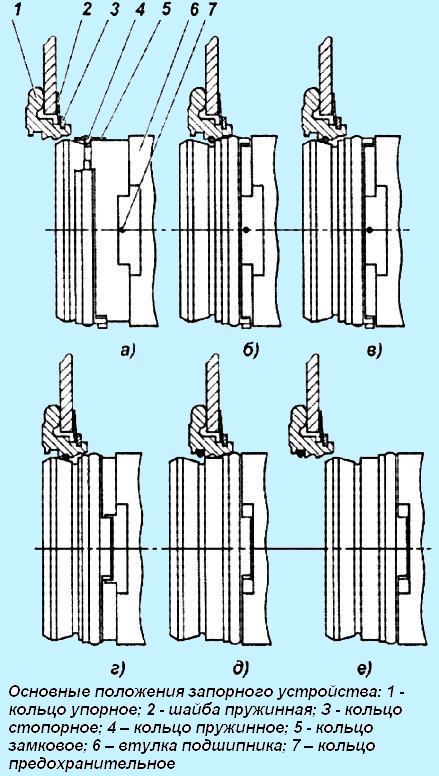 Mounting the clutch on the engine

The clutch is installed on the engine in the following order:

The design of the locking device of the clutch release mechanism requires special rules for installing the gearbox on the engine.

The main positions of the locking device are shown in fig. 4.

The gearbox is installed and the clutch release clutch is engaged with the diaphragm spring thrust ring in the following order (the lever is located on the left side of the engine):

The spring ring thus falls into the shaped groove of the thrust ring (position b, Fig. 4).

Checking the quality of the clutch installation (lack of “leading”, control of the torque on the fork shaft) is carried out with the engine off.

To do this, it is necessary to turn the fork shaft by an angle of 9°30’ - 11° clockwise, which corresponds to the movement of the coupling by 11-13 mm from the engine.

In this case, the output shaft of the gearbox, with the gear engaged, must rotate when a torque of not more than 5 Nm (0.5 kgcm) is applied.