It is most exposed to mechanical and thermal loads

Since the piston moves back and forth, high cyclic inertial loads and significant friction forces of the side surface of the piston against the cylinder are additionally created.

At the same time, the piston acts as a sealing element of the crank mechanism and removes heat from hot gases in the above-piston space. 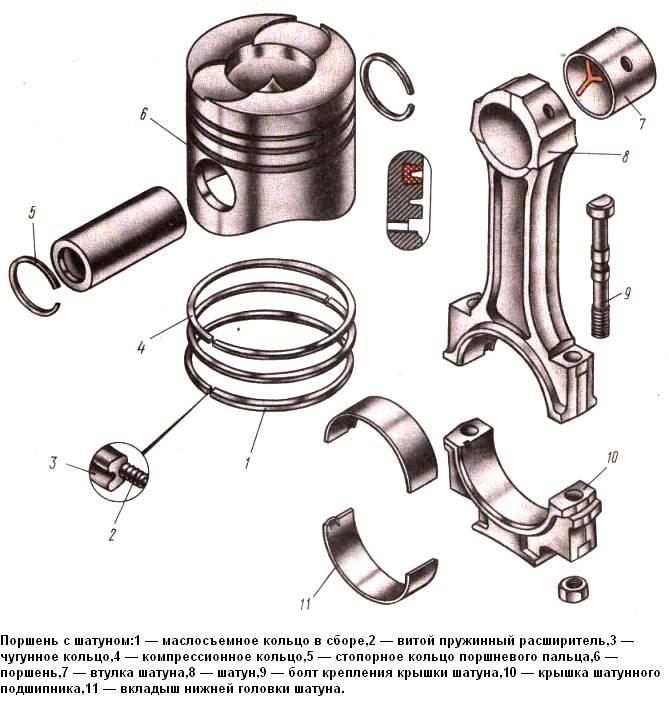 Piston 6 consists of a bottom, a sealing part and a guide part (skirt). On the inside of the skirt there are two massive tides - bosses.

They are connected by ribs to the bottom, thereby increasing the strength of the piston.

In the bosses, holes were made for the finger, in which the annular grooves for the retaining rings 5 ​​were machined.

The bottom, together with the sealing belt, forms the piston head.

On the outer surfaces of the head and skirt, grooves are machined for the installation of two compression and oil scraper rings.

The upper part of the piston is called the sealing belt, since the piston rings measured here prevent the breakthrough of gases through the gaps between the piston and the cylinder.

In cross section, the skirt has the shape of an ellipse, and the major axis of the ellipse is located in a plane perpendicular to the axis of the finger.

This piston design ensures that the gap between the piston and the sleeve in the plane of movement of the connecting rod is practically independent of the thermal state of the engine and thereby prevents the piston from jamming when the engine is warm.

At the same time, the ellipticity of the piston reduces noise when the engine is cold, due to the reduced clearance between the piston and the cylinder wall in the direction of the lateral force acting on the piston from the connecting rod.

The surface of the piston skirt is coated with a colloidal graphite coating to improve the running-in of the piston in the sleeve.

The pistons are cast from a high-silicon aluminum alloy, which improves heat transfer and reduces the mass of the pistons, and consequently, the inertial forces acting in the crank mechanism due to the uneven movement of the pistons.

A figured combustion chamber is made in the bottom of the piston, and three grooves for piston rings are made in the piston head.

The top groove, which is the most loaded, has a non-resistive insert made of heat-resistant cast iron, which significantly increases the wear resistance of the piston-to-top compression ring.

To reduce the over-piston clearance when assembling the engine, by selecting the version of the piston, it is ensured that it protrudes above the sealing end of the sleeve by 0.5 ... 0.7 mm.

Two compression rings and one oil scraper are installed on the piston.

Compression rings are designed to prevent gases from escaping into the crankcase during compression and expansion. In addition, they serve to transfer heat from the piston to the cylinder.

The oil scraper ring is used to remove excess oil from the working surface of the cylinder and prevent it from entering the combustion chamber.

Gases entering this labyrinth from the space above the piston reduce their pressure and speed and press the ring against the cylinder wall.

A cut in the ring is called a lock. In working condition, the ring should always have a gap in the lock so that it does not jam when heated.

The gap value when installing the piston in the cylinder is in the range of 0.4-0.8 mm for compression rings, 0.3-0.7 mm for oil scraper.

In order for the rings to spring freely, they are also installed in the grooves on the piston in height with a small gap. The end clearance of the upper compression ring is slightly larger than that of the lower one.

Compression rings have a trapezoidal section. The working surface of the upper compression ring is chrome-plated, has a mirror surface, the lower one is molybdenum, it is matte.

During the movement of the piston, the rings are pressed first to the upper, then to the lower planes of the grooves and thereby create the necessary seal that prevents the breakthrough of gases into the crankcase through the grooves.

The vacuum in the cylinder during the intake stroke also contributes to this.

With an increase in the end clearance in the ring-piston groove interface, due to the pumping action of the rings, the amount of oil pumped into the combustion chamber increases, resulting in a sharp increase in its consumption.

Therefore, it is necessary to check the end clearance after installing the rings on the piston.

The oil scraper ring is prefabricated; it consists of a cast iron box-section ring with a chrome-plated working surface and a coiled spring expander. Chrome plating of rings increases their wear resistance.

The lower groove in the piston for the oil scraper ring has holes around the entire circumference to drain the oil removed by the ring from the surface of the cylinder.

The piston is connected to the connecting rod by a hollow floating pin, the axial movement of which in the piston is limited by two spring retaining rings.

The cap and connecting rod are marked with mating marks in the form of three-digit serial numbers. In addition, the cylinder number is stamped on the connecting rod cap.

Special locking of connecting rod bolts and nuts from self-loosening is not provided.

Conrod bolts can break due to under- or over-tightening. Tightening torque 23 - 25 kg/cm