The crankshaft is made of hot-forged high-carbon steel and hardened by nitriding or high-frequency current hardening of the connecting rod and main journals.

It has five main bearings and four connecting rod journals, which are interconnected by cheeks

Cavities closed with plugs are made in the connecting rod journals of the shaft. 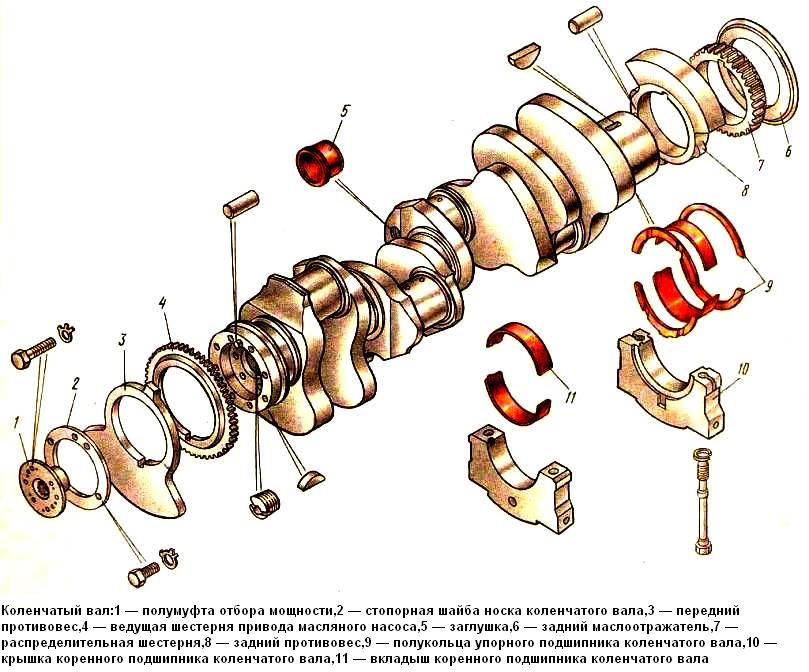 In the cavities, the oil undergoes additional centrifugal cleaning.

The cavities of the connecting rod journals communicate with inclined holes drilled in the cheeks of the shaft with transverse channels in the main journals.

On the cheek, toe (front end) and shank (rear end) of the crankshaft there are counterweights of the balancing system; on the cheeks they are made as one piece with the crankshaft, on the toe and shank they are pressed during assembly and fixed with a segment key.

The shaft is fixed from axial displacements by four persistent steel-aluminum half rings installed in the undercuts of the block and the cover of the rear main bearing.

The crankshaft shank is sealed with a reinforced rubber cuff pressed into the flywheel housing and an oil deflector.

Main and connecting rod plain bearings are made in the form of replaceable thin-walled split liners, which are installed with an interference fit in precisely machined cylindrical nests - beds.

The crankshaft main and connecting rod bearing shells are made of steel tape coated with a layer of lead bronze and a thin layer of lead alloy.

The upper and lower crankshaft main bearing shells are not interchangeable. The upper shells of the main bearings differ from the lower ones by the presence of holes for supplying oil and an annular groove for its distribution.

To prevent rotation and axial movement of the liners in the sockets, the edges of the liners are pressed out with edges that fit into the corresponding grooves made in the beds of the block and connecting rod, as well as in their covers.

As the crankshaft journals wear out, it is allowed to regrind them four times, the liners are produced in seven repair sizes (table), since it is possible to bore holes in the block and connecting rods for liners in the repair size. 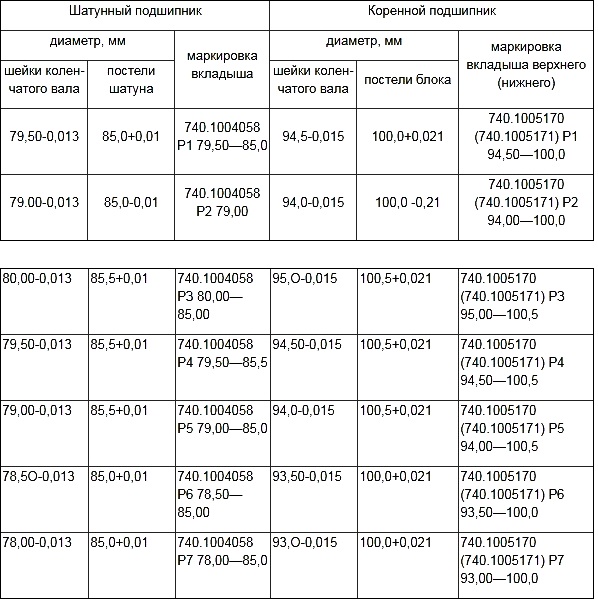 Stamps of the repair size and diameters of the crankshaft journals and beds in the block or connecting rod are applied to the back side of the liner near the plane of the connector. 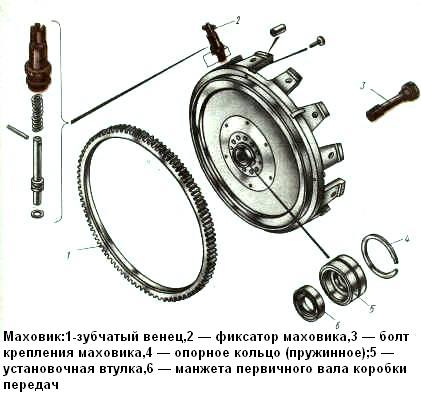 The flywheel (Fig. 3) is necessary to accumulate kinetic energy during the power stroke and rotate the crankshaft during auxiliary strokes, as well as to bring the piston out of dead spots and reduce the uneven rotation of the shaft.

The flywheel is cast in special gray cast iron. It is fixed on the rear end of the crankshaft with eight alloy steel bolts 3.

A ring gear 1 is pressed onto the machined cylindrical surface of the flywheel, designed to be connected to the gear of the starter shaft when starting the engine.

A clutch is installed on the rear end of the flywheel. To regulate the engine, the flywheel has a groove for the lock 2 flywheels and 12 holes for turning the crankshaft with a crowbar.