The control system allows you to change the air pressure in the tires from the driver's seat, both in the parking lot and while the car is moving, control the tire pressure, and also continue driving the car with minor tire damage.

The tire pressure control system (Fig. 1) consists of a compressor 1. an air cylinder 4, a control valve 7, a pressure regulator 3, a safety valve 5, shut-off air valves for the wheels, sealing blocks installed in the trunnions of the axles (Fig. 2 ), pressure gauge, pipelines and hoses. 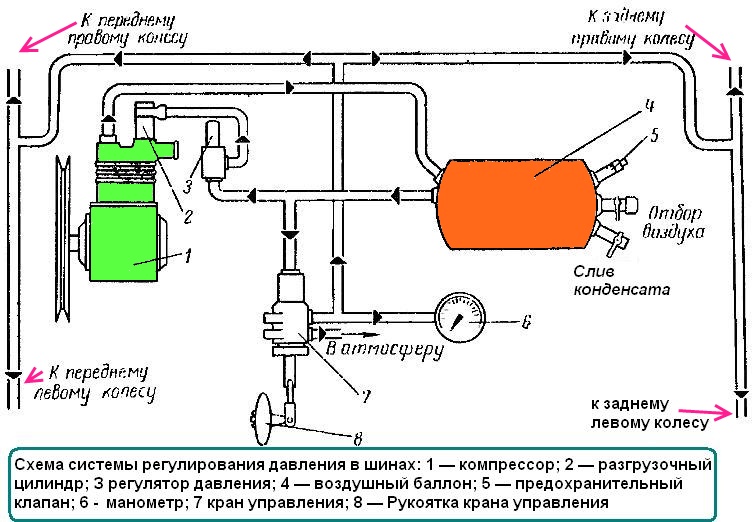 The piston rod, having moved down, opens valve 12 and thus connects the cylinder cavity with the engine air filter, as a result of which, during the upward stroke of the compressor piston (compression stroke), air is forced back into the air filter, and not into the system. i.e. the compressor is running without load. 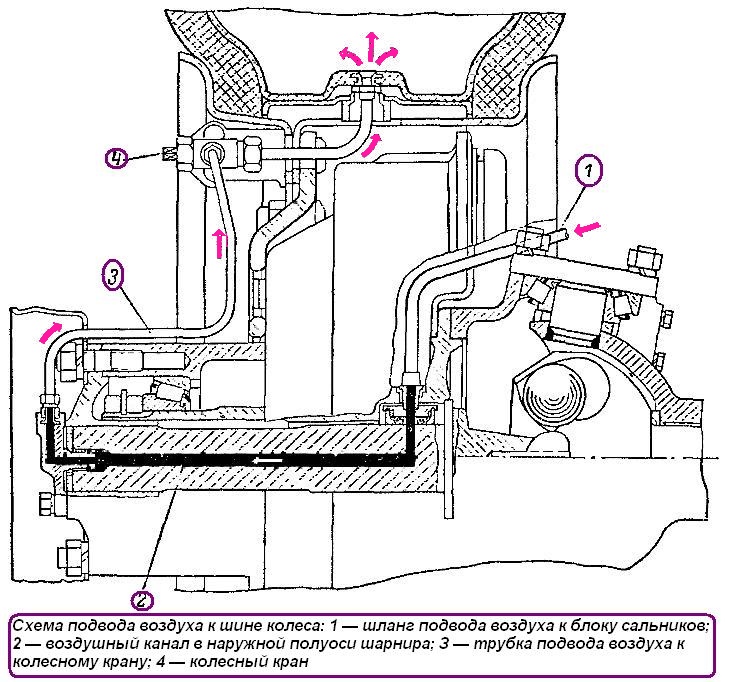 When the pressure in the system drops to 4-4.5 kg/cm2, the pressure regulator connects the unloading cylinder to the atmosphere, the piston 6 with the rod rises under the action of the spring 7 upwards, the inlet valve is released, and the compressor starts to force air into the system again.

The pressure regulator (Fig. 4), together with the unloading cylinder, automatically maintains the pressure in the system in the range from 4-4.5 to 5-5.5 kg/cm2. 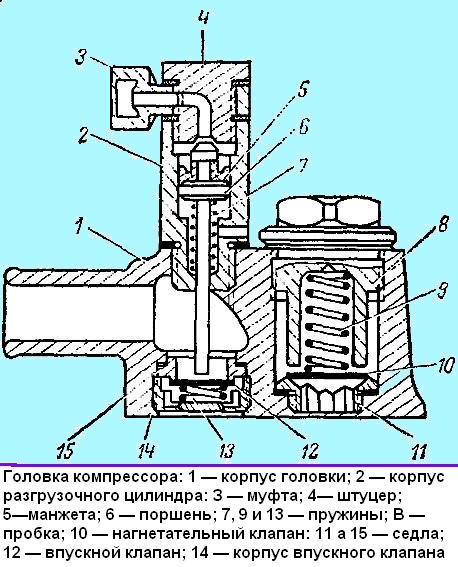 When the pressure in the system rises to 5–5.5 kg/cm2, valve 9, under the influence of this pressure, overcoming the force of spring 13, rises until valve 8 is pressed against the seat 6, while the compressed air from the system through the hole "a", the filter 11 and the hole "b" enters the unloading cylinder, as a result of which the air supply to the system stops.

When the pressure in the system drops to 4-4.5 kg / cm2, the regulator spring 13 overcomes the force of compressed air pressure and lowers the balls down, as a result of which the unloading cylinder is disconnected from the system and connected through the holes " b" and "c" with the atmosphere, the compressor inlet valve is released, and the compressor starts to force air into the system. 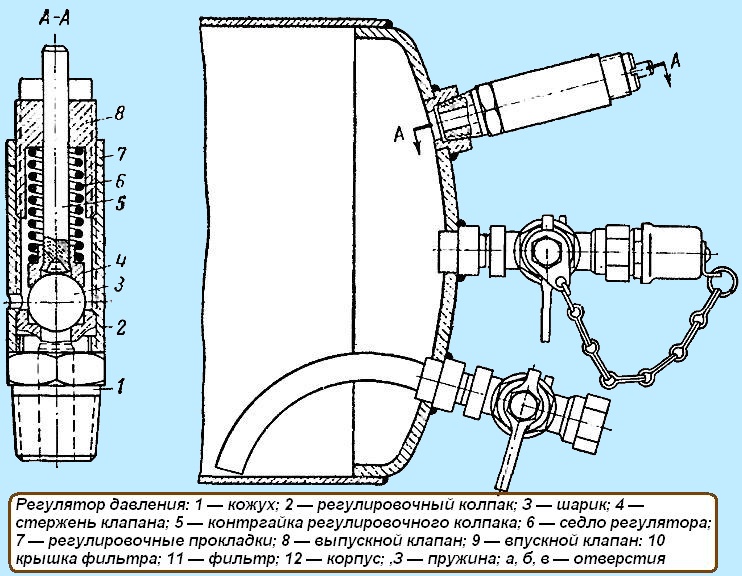 Control valve (Fig. 6), allows you to connect the chambers of the wheels with a compressor (when the tires are inflated with air), with the atmosphere (when the pressure in the tires decreases) or lock them (if you want to keep the existing pressure in tires).

Moving relative to body 1 in one direction or another from the middle position, spool 8 can connect cavity "B", which communicates with the wheel chambers, with cavities "A" or "C", which communicate respectively with the compressor and the atmosphere.

The spool of the draft control valve is connected to the valve handle fixed on the fixed floor of the cab.

To switch the tap, lift the handle up and turn it to the desired position; a table indicating the position of the handle is located on the instrument panel

The neutral position of the control valve is fixed by the handle in the bracket, and the pressure increase and pressure decrease positions are fixed by locking the lock ring 6 into the support washer 5 and into the nut 7, respectively.

Air cylinder (see fig. 5) is designed for settling water vapor and oil condensate entering the system from the compressor together with compressed air.

- The sealing collars of the stuffing box are damaged

When tires are inflated with air, the pressure in them does not rise to 2.8 kg/cm2 (to normal pressure):

- Large air leak in the system

Find leaks and fix them

Disassemble the unloading cylinder, wash it, lubricate its parts with a thin layer of CIATIM-2O1 grease and assemble it.

Disassemble the regulator, wash its parts in gasoline, dry and reassemble.

Repair or replace the compressor

Large amount of oil in condensate drained from air tank:

Repair or replace the compressor

Frequent activation of the safety valve, accompanied by a characteristic sharp sound:

Disassemble the regulator or valve, wash it in gasoline and reassemble. Adjust them if necessary

In winter, one or all tires do not inflate or deflate:

Find the blockage, warm it up and blow it out with air

The pressure regulator (see fig. 4) must be disassembled in the following order.

Remove cover 1 of the regulator. 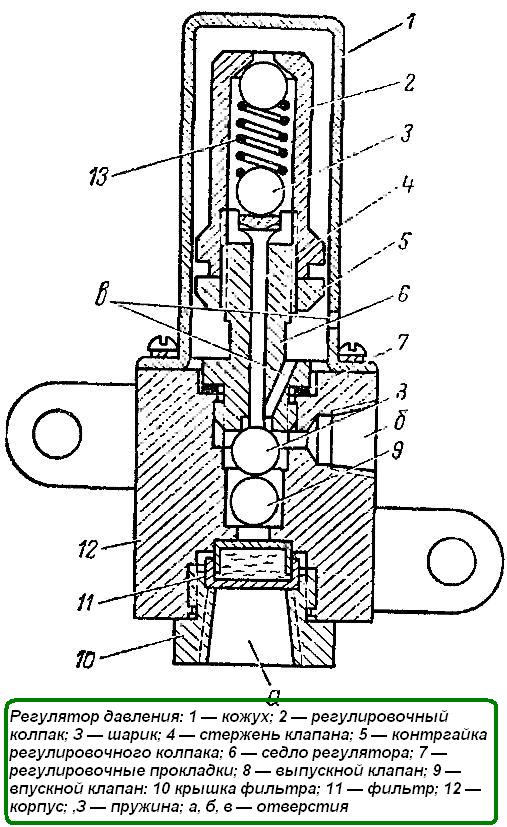 Unscrew the seat b of the regulator, remove the shims 7 and ball valves 8 and 9.

If damage is found to the surfaces of ball valves or their seats, the parts or the entire regulator must be replaced.

Before assembling, thoroughly rinse all parts of the regulator in gasoline.

The regulator is assembled in the reverse order of disassembly.

If the regulator does not turn the compressor off and on at the specified pressures, it must be adjusted.

Adjust the regulator as follows:

When screwing the cap on, the pressure increases, when screwing it off, it decreases. Lock cap with nut 5;

With an increase in the number of gaskets, the pressure decreases, with a decrease it increases.

If damage is found to a ball valve or its seat in the seat, the ball, seat, or valve assembly must be replaced.

Before assembling, wash the parts of the safety valve thoroughly in gasoline. After assembly, adjust the valve to a pressure of 6 kg/cm2 with screw 8. 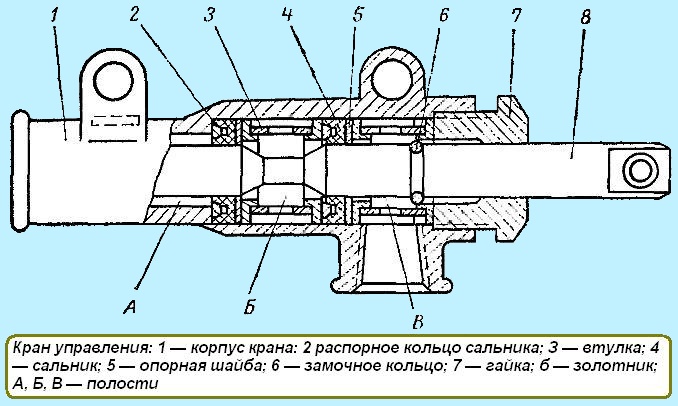 Control tap (see Figure 7). To disassemble the control valve, unscrew the lock screw of the nut 7, and then the nut 7, remove the spool 8, glands 4, spacer rings 2, bushings 3 and support washers 5.

Before assembling the parts of the control valve, rinse and lubricate with TsIATIM-201 grease.

Adjust the tension of the stuffing boxes with nut 7. After adjusting the spool must move without jamming, and the valve itself must be airtight.

Oil seal blocks for air supply to the wheels. Of the components of the tire pressure control system, oil seal blocks most often fail.

A faulty unit can be identified by screwing rubber tubes instead of a breather on the front axle stub body and on the rear axle flange and lowering them into the water; air bubbles will appear from the side of the faulty blocks. 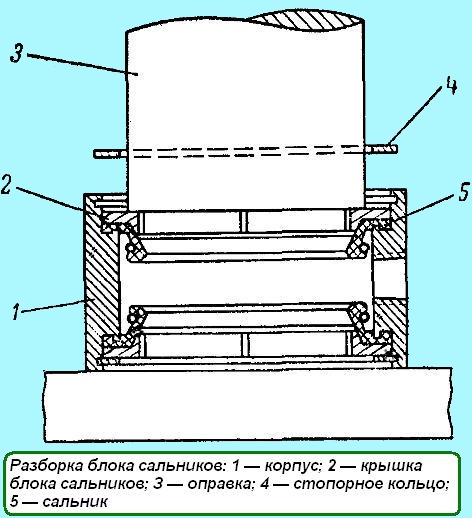 Once you have identified the bad oil seal assembly, remove the stub axle and remove it. If the seals are worn, disassemble the unit using a mandrel (Fig. 8) and replace the seals.

Check the newly assembled unit for tightness at a pressure of 3 kg/cm2, using a mandrel with a diameter of 45-0.1mm.

When placing the block of stuffing boxes in the stub axle in the cavity between the cuffs, lay 10g over the entire surface. lubricate the neck of the axle shaft under the oil seals, and fill the free cavities in the stub axle outside the block with grease (grease 1-13 grease GOST 1631-61).

After troubleshooting, check the tire pressure control system for leaks.

With the wheel valves open and the control valve handle in the neutral position, the air pressure drop in the tires should be no more than 1 kg / cm2 for 12 hours.

It should be borne in mind that the tightness must be checked after the tires have cooled down to ambient temperature.