Scheme of the lubrication system is shown in the figure

Through the oil receiver, the oil is sucked in by the oil pump and fed through the full-flow filter into the oil line.

A pressure reducing valve is installed on the pump, which bypasses the oil into the line, bypassing the filter element if it has excessively high resistance (clogging, starting a cold engine). 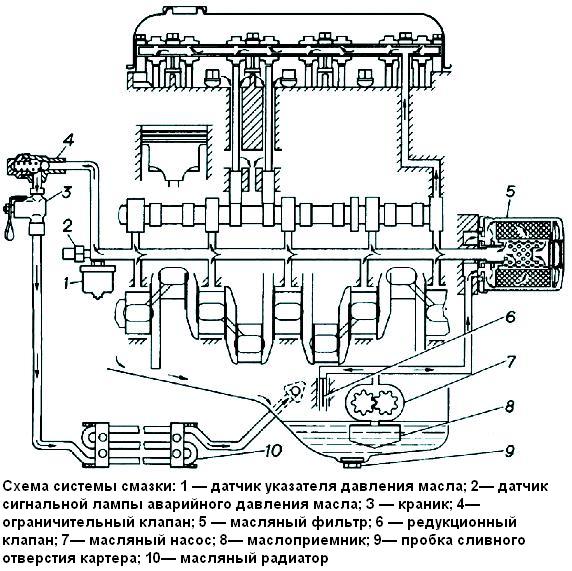 The bypass valve opens when the pressure difference at the inlet and outlet of the filter is 58–73 kPa (06–075 kgf/cm2).

The oil filter* is mounted on the cylinder block on the right side of the engine.

The filter is removed by turning it counterclockwise.

When installing a new filter on the engine, make sure that the sealing rubber gasket is in good condition, lubricate it with engine oil and wrap the filter until the gasket touches the plane on the cylinder block, then tighten the filter 3/4 turn by hand.

Maintenance of the lubrication system

Check the oil level after 2-3 minutes. after stopping a warm engine.

Pour oil into the engine crankcase and change it in strict accordance with the specifications.

While operating the engine on the car, monitor the operation of the oil pressure sensors.

On a warm engine with a good lubrication system at idle, the warning light may be on, but should immediately go out when the crankshaft speed increases.

It is recommended to flush the engine lubrication system after two oil changes, to do this, drain the used oil from the crankcase of a hot engine, fill in the special washing oil VNIINP-Fd 3-5 mm above the mark "0" on the oil gauge and let the engine run for 10 minutes at minimum idle speed.

Then drain the washing oil, replace the oil filter and refill with fresh engine oil.