The gas distribution mechanism controls the timely intake of air charge into the cylinders and the removal of exhaust gases from them; consists of valves with springs, a camshaft with gears and parts that transmit movement from the shaft to the valves

The crankshaft through the gears rotates the camshaft 1.

The protrusion of the shaft cam raises the pusher 2 together with the rod 4, the rocker 6 rotates on the axis and lowers the valve 17, compressing its springs 13 and 14.

When the shaft is further rotated, the cam protrusion comes out from under the pusher, the pressure on the valve stops and, under the action of compressed springs, it rises in the sleeve, tightly closing the hole in the cylinder head. 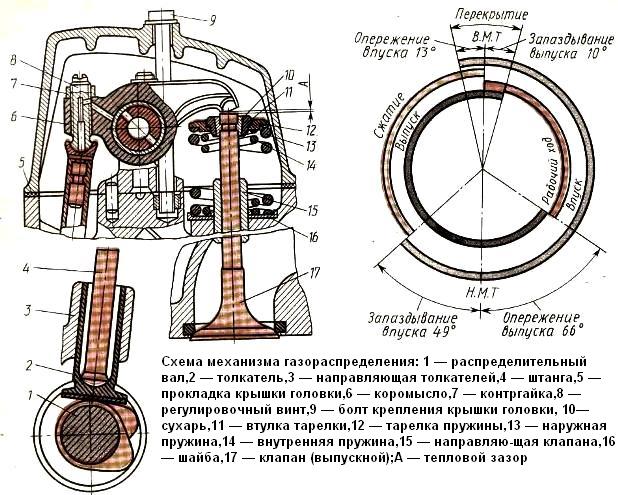 For one working cycle of a four-stroke engine, that is, for two revolutions of the crankshaft, the valves should open and close the cylinder head holes only once. In this case, the camshaft makes one revolution.

The power of the engine depends on the filling of the cylinders with a fresh charge of air, the degree of purification of them from exhaust gases.

In order for more air to enter the cylinders, the inlet valve opens ahead of time, i.e. before the piston arrives at bw

Filling of the cylinder starts from the suction action of the piston, but under the influence of inertial pressure in the intake piping, which is created due to frequently repeated strokes.

The inlet valve closes with forgetting, i.e. after the piston arrives in the v.m. i.e., because air continues to flow into the cylinder by inertia and the pressure in it is even lower than atmospheric pressure.

The exhaust valve also opens ahead of schedule, i.e. before the end of the power stroke, and part of the gases under low pressure are ejected from the cylinder.

This reduces the back pressure of the gases remaining in it, reducing the power required to push them out.

The exhaust valve closes with a delay, i.e. after c. m.t., providing better cleaning of the combustion chamber from exhaust gases.

At some point, both valves are simultaneously ajar.

The so-called valve overlap occurs, in which the gases leaving the cylinder contribute to the suction of air into the cylinder, increasing its filling.

In fig. 1 shows a diagram of such phases, from which you can see at what position of the crankpin relative to the dead points the valves open and close.

The phase diagram is provided by the shape and relative position of the camshaft cams, as well as a certain gap between the valve stems and the rocker noses. 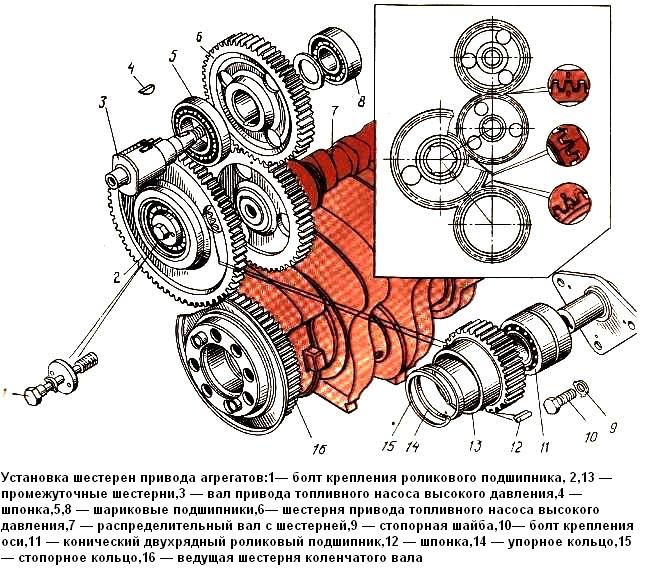 The camshaft drive is carried out from the crankshaft through the gears of the drive units. Installation of gears of a drive of a camshaft and units is shown in fig. 2.

At the end of each gear, “O” marks or risks are embossed, the coincidence of which must be ensured when assembling the engine to ensure the correct valve timing.

The camshaft is steel, the working surface of its cams and bearing journals is cemented and hardened by high frequency currents.

The profile of the cams is not the same for intake and exhaust valves.

The camshaft is mounted in the collapse of the cylinder block on five plain bearings, which are steel bushings filled with an anti-friction alloy.

A spur gear is mounted on the rear end of the camshaft.

The camshaft is fixed against axial movement by a rear support bearing installed in the housing.

On the one hand, the gear hub rests against the ends of the housing, and on the other hand, the thrust collar of the rear bearing journal of the shaft.

The bearing housing is attached to the wall of the cylinder block with three bolts.

To improve the performance of the cam-pusher pair, the end face of the pusher plate is welded with chilled cast iron.

The end face of the pusher, in contact with the rod, ends with a spherical seat to stop the lower end of the rod.

The valve tappets are mounted in guides bolted to the cylinder block.

Push rods are hollow with pressed tips. The lower tip has a convex spherical surface, the upper one is made in the form of a spherical cup to stop the adjusting rocker screw.

Spout of rocker long arm hardened to high hardness. To reduce the stroke of the pusher and the rod, as well as to reduce the forces of inertia, the rocker arms are made unequal.

An adjusting screw with a locknut is screwed into the short arm of the rocker arm to set the required clearance between the rocker arm and the end of the valve stem.

The rocker arms of the intake and exhaust valves are cantilevered on axles made integral with the rocker arms.

Studs are fixed with pins and fastened to the head with studs. Lubrication is introduced to each rocker through a hole in the rack.

The valves are made of heat-resistant steel. Each cylinder has one intake and one exhaust valve.

The rods are lubricated with oil, which flows from the junctions of the rocker arms with the axles and is sprayed by the valve springs.

Each valve has two equal-pitch, counter-wound coil springs to provide a high resonant response to the valve train.

The lower ends of the springs rest on the cylinder head through a steel washer, the upper ends - in the thrust plate.

The latter rests against a conical sleeve, which is connected to the valve stem with two cone crackers.

The detachable connection of the sleeve - the plate has little friction during relative movement, which makes it possible for the springs to rotate the valves relative to the seats when they are compressed (since the spring is somewhat twisted when compressed).

This achieves uniform wear of the working surfaces and the same heating of the valves during operation.

Maintenance of the gas distribution mechanism

The main work in the maintenance of the crank and gas distribution mechanisms is to check and, if necessary, adjust the clearances between the valves and rocker arms, as well as listening to the running engine to detect knocks and replacing worn or broken parts.

The clearance in the valve mechanism should guarantee a tight fit of the valve to the seat when the stem is elongated from heating and in case of head settlement in the seat due to chamfer wear.

During operation, the normal operation of the gas distribution mechanism may be disrupted, since hot gases destroy the seating surfaces of the valve plates and their seats, carbon deposits are deposited on the valve heads.

This leads to a violation of the tightness of the valve to the seat, as a result of which gas leaks and overheating of the valve are possible.

The rubbing surfaces of the mechanism parts gradually wear out, the gap between the valves and rocker arms is broken. This leads to a change in the valve timing.

The most noticeable external sign of a malfunction of the mechanism is knocking in the area of ​​\u200b\u200bthe valves, camshaft gears and camshaft.

During the operation of the engine, the parts of the crank mechanism operate reliably and do not require periodic maintenance.

As a result of violation of the rules of operation or careless assembly, malfunctions in the operation of the mechanism and (or) premature wear of its parts are possible.

A sign of increased wear of parts of the cylinder-piston group or the occurrence of piston rings is an increased consumption of crankcase oil for waste, smoky exhaust and intensive release of gases from the breather.

The condition of the crankshaft bearings (clearances) is characterized by oil pressure in the main line.

If it falls, it is necessary to check the serviceability of the pressure gauge, filters, valves, oil pump and supply lines.

After making sure that the listed elements are in good condition, they open the main and connecting rod bearings and determine the condition of the rubbing surfaces of the necks and liners.

Knocks during engine operation are heard at different crankshaft speeds using a lightoscope.

The reason for their occurrence is determined by some characteristic shades of knocks in the corresponding areas of their listening.