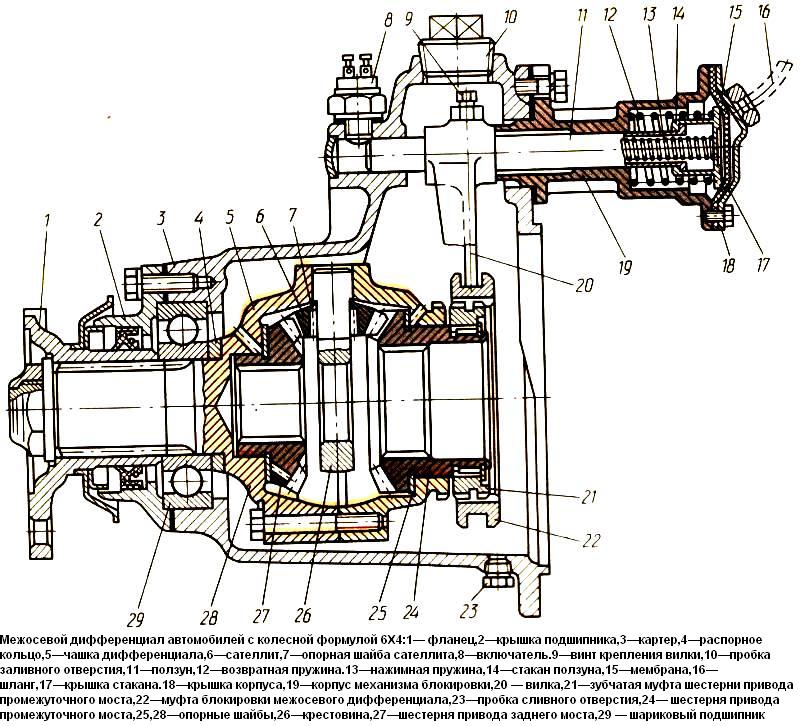 The front cup has a shank that rests on ball bearing 29.

A flange 1 is installed on the splined part of the shank for connection to the driveline.

A crosspiece 26 is clamped between the halves of the body, on the spikes of which four satellites 6 with support washers 7 are installed.

The satellites are engaged with gears 24 and 27 of the drive of the intermediate and rear axles.

Since the satellites act on the teeth of these gears with equal forces and their sizes are the same, the torques on the gears of the drive of the rear and intermediate axles are also the same, i.e. the differential is symmetrical.

The gear 27 of the rear axle drive is installed in the differential housing, a support washer 28 is placed under its end. The housing has a channel for supplying oil to the support washer and the gear hub.

Splines made along the inner surface of the hub, gear 27 is connected to the splined end of the rear axle drive through shaft.

At the end of the gear hub 24, a toothed clutch 21 is installed on the splines, along the outer part of which the clutch 22 of the center differential lock can move.

This clutch is connected with a fork 20 to the slider 11 associated with the locking control mechanism.

The body 19 of the locking mechanism is mounted on the center differential housing.

A rubber membrane 15 is clamped between the body and the cover 18. The cavity behind the membrane (on the side of the cover) is connected by a hose 16 to the valve for switching on the differential lock.

The slider 11 is connected to the cup 14, inside of which the pressure spring 13 is installed, and the return spring 12 is installed outside.

The lever for the center differential lock is located on the instrument panel in the cab.

On the instrument panel there is also a control lamp for turning on the center differential lock.

In the position shown in the figure, the center differential is unlocked.

To lock the differential, the switch lever located on the instrument panel is moved to the right position.

At the same time, compressed air from the control valve through the pipeline system and hose 16 enters the cavity between the housing cover and the membrane, which bends, moves the glass 14 and the slider 11 forward, overcoming the resistance of the return spring 12.

From the beginning of the movement of the slider, the contacts of the switch 8 are closed and the control lamp on the instrument panel lights up.

Together with the slider, the fork 20 mounted on it also moves, which engages the clutch 22 with the ring gear on the differential housing.

To unlock the center differential, the control valve lever on the instrument panel is moved to the left position.

In this case, the cavity of the differential lock mechanism will be connected to the atmosphere through the control valve and pipelines.

Under the action of the return spring, the membrane and the slider with the fork move to the right (backward), simultaneously displacing the lock-up clutch so that it disengages from the ring gear of the differential case.