The design of the YaMZ-238 diesel fan drives

The use of a friction drive allows you to:

To increase the reliability of the gear drive of the engine by reducing the dynamic loads on the gears.

Improve comfort by maintaining the right climate in the cab and reducing noise.

Design and operation of the fan drive

Design and operation of a fan drive with a mechanical switch

The fan is controlled by a switch.

The fan is off when the engine is off.

After starting the engine, the fan impeller can rotate due to friction in the bearings and other mating parts of the disc clutch at a frequency of 200÷500 rev/min.

Further through the hole in the housing, the radial holes in the bushings 10 and 22 enter the axial hole of the drive shaft 18, and from there to the piston 30.

The piston begins to move, transferring forces through springs 32 to the holder, which presses on disks 4 and 5, choosing the gaps between them.

After compression of the driving and driven disks, the driven shaft 25 with the impeller begins to rotate at the operating frequency.

After the temperature condition of the engine reaches a value close to the lowest optimum, the switch stops the oil supply.

The oil under the piston 30, under the action of centrifugal forces, as well as springs 7, 32, moves through the drainage holes through special channels into the internal cavity of the front cover 2 and pulley 24.

With the help of scoop tube 9 and further through the channels in the housing, oil enters the engine crankcase.

As the cavity under piston 30 is freed from oil, it moves under the action of springs 7 and 32.

The friction drive discs move apart and the fan turns off. 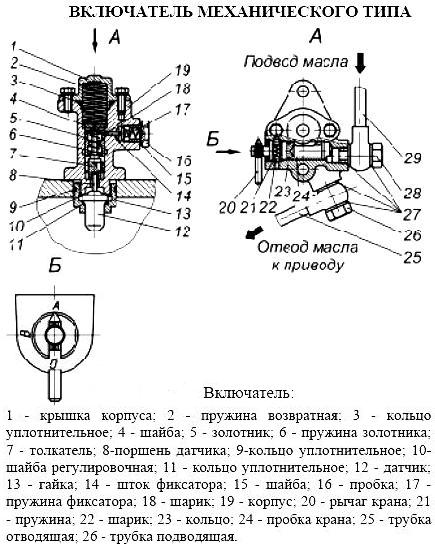 The mechanical type switch (Fig. 2) is combined with a temperature sensor and a manual mode switch and is installed on the engine water pipe.

The switch is used to control the friction drive clutch. Its mode of operation is set using the manual switch 20, which has three positions:

Oil from the central oil channel of the block through the inlet pipe 29 enters the switch.

When the lever is in the "B" position, the oil passes freely through the switch and enters the drive through the outlet tube 25, including it.

When the lever is in the ″O″ position, no oil enters the drive. Drive disabled.

When the lever position ″A″, the friction drive is switched on and off automatically depending on the temperature of the engine coolant.

When the coolant temperature is above +70ºС, the piston 8 of the sensor 12 is pushed out of the housing as a result of the volumetric expansion of the sensor filler.

Piston 8, resting against the pusher 7, raises it, simultaneously compressing the spring 6 of the spool 5.

The spool of circuit breaker 5 remains stationary, because held by the ball 18 of the latch 14.

When the coolant temperature is about +85ºС, the pusher 7 touches the spool 5, the ball 18 leaves the fixing groove, the spool 5 moves sharply towards the movement of the pusher 7.

The ball 18 enters another locking groove, the spool 5 stops and takes a position in which the cavity into which the oil is supplied is connected to the cavity that drains the oil.

Oil flows through the tube to the friction drive of the fan.

As the temperature of the coolant decreases, the piston of sensor 8 begins to move enter sensor 12 under the action of spring 6.

When the coolant temperature is +70ºС, the reverse movement of the spool 5 occurs, which closes the inlet and outlet cavities, stopping the oil from reaching the actuator. The drive is switched off.

Attention! When preparing to overcome the ford, it is necessary to set the fan drive switch to the “O” position (permanently off).

Design and operation of a fan drive with an electromagnetic switch 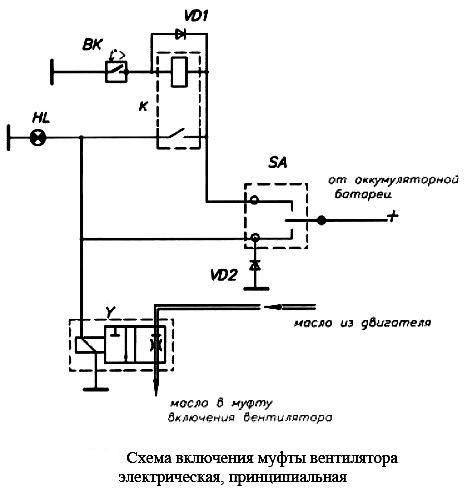 The device and principle of operation of the friction clutch of the fan drive are similar to the previous one, but the design of a number of parts has some peculiarities. 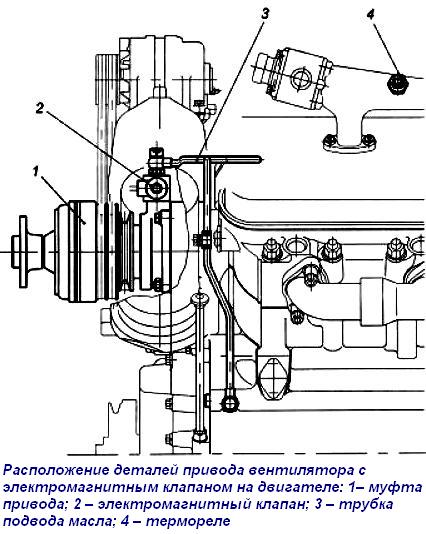 Features of the operation of the electromagnetic switch (Fig. 3-7) are that from the thermal switch installed on the right water manifold, an electrical signal is sent through the relay to the solenoid valve, which controls the flow of oil into the drive clutch. 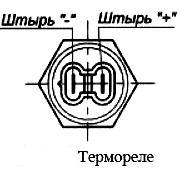 The drive mode switch in this case is located in the cab and controls the operation of the solenoid valve also by an electrical signal.

The circuit for switching on the fan clutch is electrical, in principle (Fig. 3) includes the following elements: 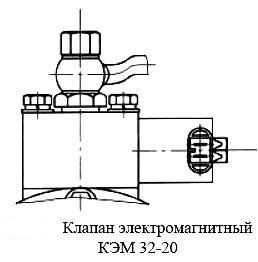 ** – The electrical circuit diagram, therefore, it can be modified, including other kits can be applied power units, which are selected by enterprises-consumers of power units.

Removing and disassembling the drive

Using any suitable puller, press the gear off the drive shaft.

7. Press out the drive shaft. In this case, the pulley 24 must be fixed in the axial direction in order to avoid breakage of the scoop tube 9.

After that, remove the inner cage of the rear bearing 15 and the inner spacer sleeve 11 together with the sealing rings 12 from the drive housing 14.

8. Unscrew the fastening screws 10, remove the scoop tube and the compressor and generator drive pulley. 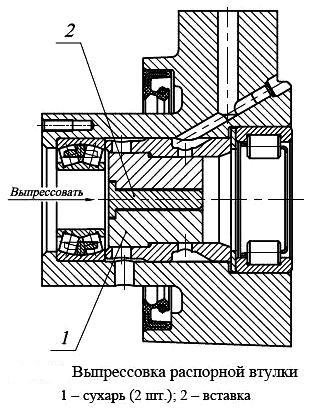 9. Loosen the mounting bolts 19 of the thrust flange 16, press out the outer spacer sleeve 21 and the outer race of the rear bearing.

In order to avoid the transfer of axial force through the front bearing cage, the press-out must be carried out using a special tool, as shown in fig. 10 and 11.

After that, remove the front bearing from the housing. 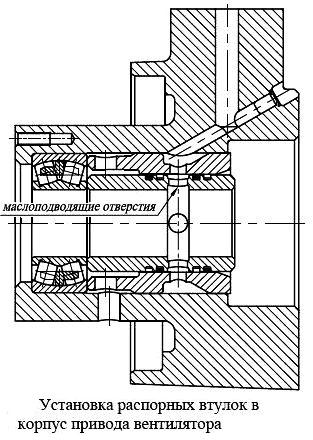 Assembly of the fan drive must be carried out in reverse order. In this case, the following requirements must be met: 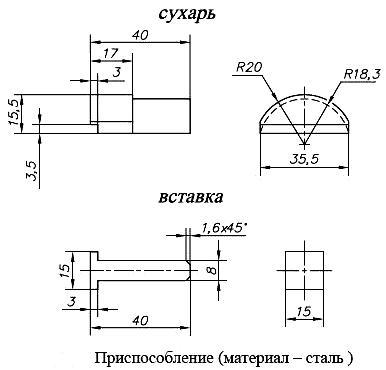 Rust, oil and other contaminants in the threaded connection are not allowed.

For the assembled fan drive, the rotation of the pulley relative to the housing must be free, without jamming.

The rotation of the fan hub relative to the fixed housing and the pulley must also be free, without jamming.