Install the driven half-coupling (Fig. 1, 2) on the advance clutch (damper clutch) and fasten with bolts

Turn the coupling so that the bosses of the driven coupling half are in a horizontal position, and the mark on the end of the coupling is in the indicator zone 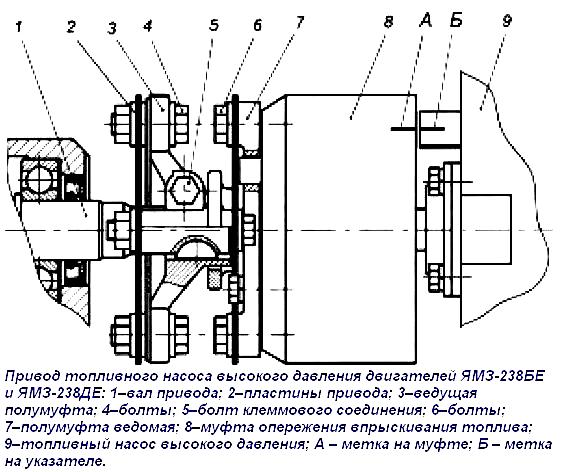 Install the high-pressure fuel pump with advance clutch (damper clutch) assembly to the engine and secure it with bolts.

Before tightening the drive pinch bolt and after setting the injection advance angle, adjust the flatness of the plate packs by moving the coupling half flange along the drive shaft.

On the engine block, install the fuel pump in a vertical position, tighten the fastening bolts evenly, avoiding blockage of the pump. 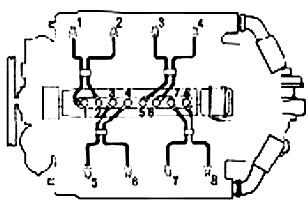 Connect the pump sections to the injectors with the high pressure fuel lines in the order shown in fig. 3.

Check the presence of oil in the housings of the high pressure fuel pump and the regulator, if necessary, add oil to the level of the hole for the oil drain pipe.

Connect the oil inlet and outlet pipes and fuel lines.

After starting the engine, adjust the minimum idle speed of the crankshaft as follows:

When the bolt is screwed in, the engine speed increases, when it is screwed out, it decreases.

After adjustment, lock the minimum speed bolt and buffer spring housing with nuts.

The minimum idle speed can also be adjusted on a new engine during the initial period of its operation.

It is strictly forbidden to violate the factory setting of maximum speed without subsequent testing on the stand during operation.