Design + replacement of the crankshaft of the YaMZ-238 diesel engine

Crankshaft - steel, made by hot stamping.

All surfaces of the shaft are nitrided and the depth of the nitrided layer is at least 0.35 mm.

The connecting rods are mounted on the crankpins (two for each).

The main and connecting rod journals are lubricated with oil under pressure during operation.

Oil is supplied to the main bearings, and then, through inclined channels to the crankpins. 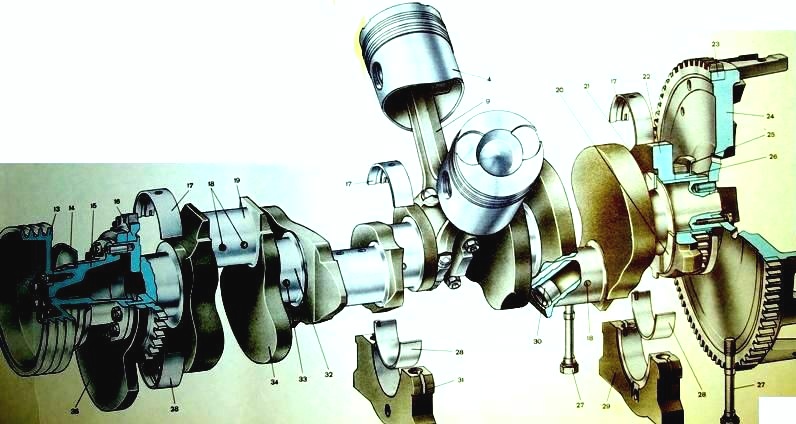 To balance the engine and unload the main bearings from the inertial forces of the moving masses of the pistons and connecting rods and unbalanced centrifugal forces, counterweights are installed on the cheeks of the crankshaft, the assembly with which the shaft is balanced.

Axial fixation of the shaft is carried out by four bronze half-rings installed in the undercuts of the rear main bearing.

To prevent rotation, the lower half rings with their grooves enter the pins pressed into the rear main bearing cover.

The toe and shank of the crankshaft are sealed with rubber self-clamping cuffs.

A crankshaft gear and a front counterweight are pressed onto the front end of the crankshaft, secured with a nut, the tightening torque is 176.4 - 294 Nm (18 - 30 kgf m).

A hub is mounted on the cone, on which the liquid vibration damper and a pulley are fixed.

When repairing an engine, remember that impacts and dents on the vibration damper will damage it, which will inevitably lead to breakage of the crankshaft.

The extinguisher should only be stored and transported in a special container in a vertical position. 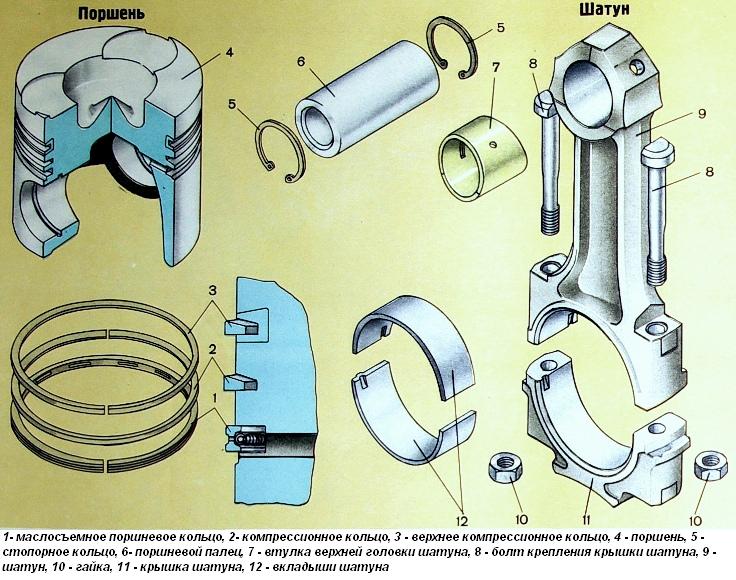 The crankshaft in forging is marked on the 5th cheek.

The crankshaft journals can be of two nominal sizes and therefore the following marking options and the use of the corresponding liners are possible.

The following types of flywheels can be installed on engines:

These flywheels assemblies with ring gears are not interchangeable.

The flywheel is bolted to the crankshaft.

A high-hardness steel plate is installed under the bolts (one for all bolts).

The offset pin is located in the plane of the first crank.

The marking on the plate in the form of a dot must be on the outside.

Twelve radial holes in the flywheel are designed to turn the crankshaft during engine adjustments.

Access to the holes is possible with the flywheel housing lower hatch cover removed.

Connecting rod (Fig. 3) - steel, I-section, with an oblique connector of the lower head. 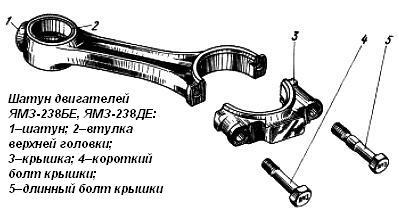 The connecting rod is finished assembled with the cap, so the caps are not interchangeable.

Replaceable liners are installed in the lower head of the connecting rod, and a steel-bronze bushing is pressed into the upper head.

The bushing is processed after being pressed into the connecting rod.

The main bearing shells of the crankshaft and the lower head of the connecting rod (Fig. 4) are replaceable, thin-walled, have a steel base and a working layer of lead bronze. 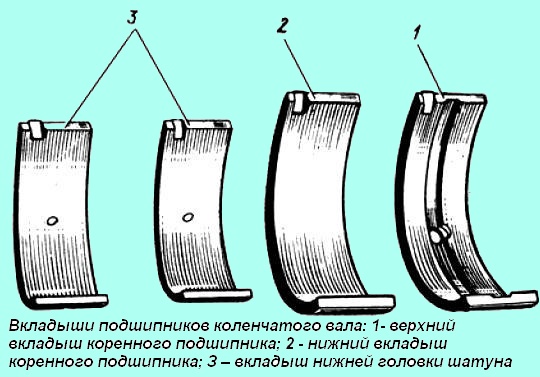 The upper and lower crankshaft main bearing shells are not interchangeable. The top liner has a hole for oil supply and a groove for its distribution.

The connecting rod bearings are interchangeable.

On YaMZ-238BE, YaMZ-238DE engines, oil is supplied through the hole in the liner to the bushing of the upper head of the connecting rod and the piston pin.

CLEANING THE CAVITY OF THE CONNECTING JOINTS

With each removal of the crankshaft from the engine, clean the cavities of the connecting rod journals, after removing the plugs 2 (Fig. 4), which close the cavities. Plugs should be replaced with new ones, their reuse is not allowed. 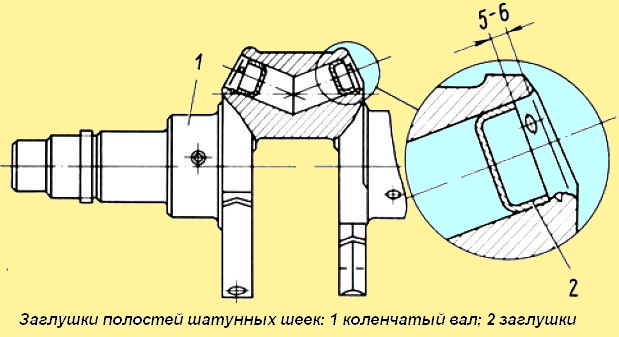 Before installing the plugs, file down the swelling of the metal at the edges of the holes from the previous centering, rinse the shaft and blow out the oil channels.

Press the plugs to a depth of 5-6 mm from the edge of the hole, and then punch inside the hole at three points equally spaced around the circumference to prevent spontaneous pressing out of the plugs.

INSTALLING THE CRANKSHAFT TO THE ENGINE

Before installation, ensure that the external surfaces and internal cavities of the crankshaft and other mating surfaces are clean.

Lubricate the journals and running surfaces with clean engine oil.

Before tightening the rear thrust main bearing, equalize the axial clearance, for which, after slightly tightening the bearing cover with bolts, move the crankshaft back and forth in the axial direction until it stops with a crowbar, first forward, then back, aligning the position of the cover.

After tightening the bolts, check the end play with a feeler gauge. It should be the same on both sides of the lid. 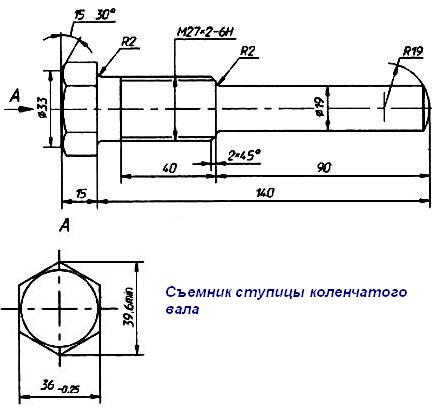 Remove the drive pulley. To remove the hub with pulley and damper from the tapered end of the eight-cylinder crankshaft, use the puller shown in Figure 6.

With the pulley and the front cover of the block removed, press the front counterweight and gear with a puller.

Before installing, heat the gear and the front counterweight to a temperature of 105 ... 155ºС and successively press them in until they stop using a special tool.