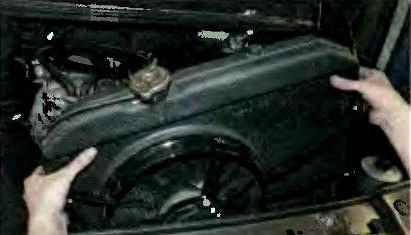 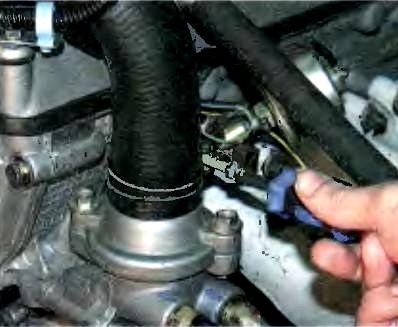 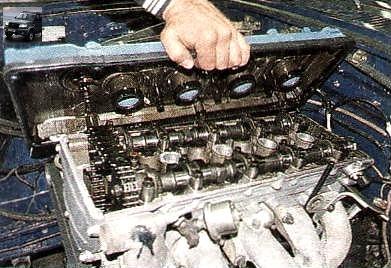 Loosen the inlet hose clamp and remove the hose. 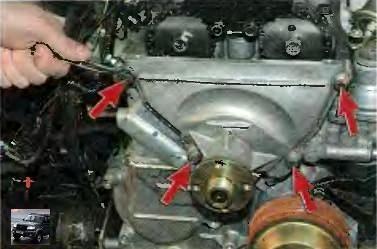 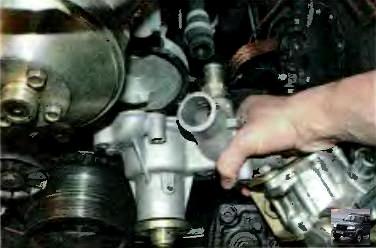 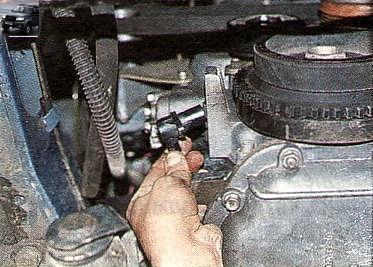 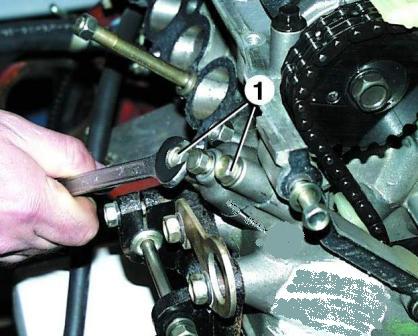 Remove the two bolts and remove the upper chain tensioner cover with gasket. Remove the cover carefully, as the hydraulic tensioner spring acts on it.

Then remove the hydraulic tensioner. 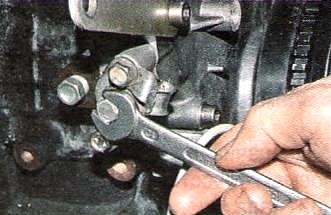 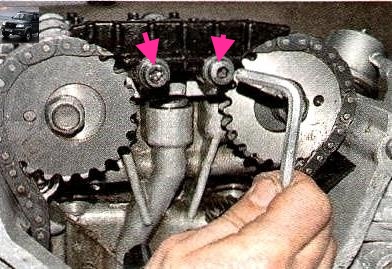 Remove the lower chain tensioner in the same way.

Remove the seven bolts and remove the chain cover. Remove the cover carefully so as not to damage the front crankshaft oil seal installed in it, the cover gaskets and the cylinder head gasket.

Remove the lower sprocket tensioner arm in the same way.

Remove the two bolts and remove the plastic chain guide. 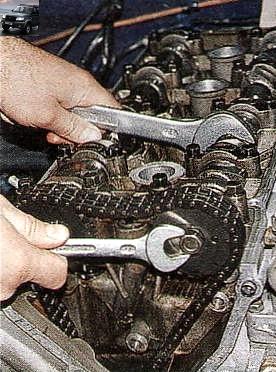 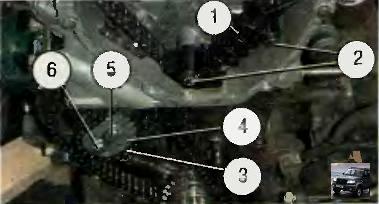 Remove the bolts 2 and pull up the chain guide 1.

Unbend the ends of the locking plate 6 and unscrew the bolt 5, to do this, keep the intermediate shaft from turning by inserting a screwdriver into the hole of the gear 3.

Remove gear 4 by insertinga screwdriver between it and gear 3 and resting with a screwdriver as a lever against gear 3.

Remove gear 4 from the top chain and remove the chain by pulling it up. 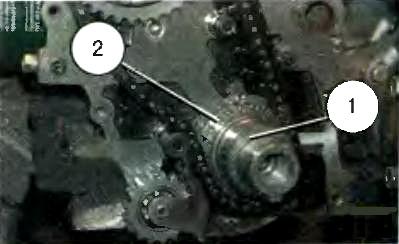 If it is necessary to remove gear 2 from the crankshaft, first remove bushing 1 and the rubber o-ring between bushing and gear. Then press gear 2 with a puller.

After removing, wash the chains and gears in gasoline, wipe and dry them.

Inspect the chains. If cracks, chips, or significant signs of wear are found on the chain bushings, replace the chains.

Replace gears that have chipped or chipped teeth.

The tensioner sprockets must rotate freely on the axles. If the sprocket teeth are chipped or chipped, replace the tensioners. 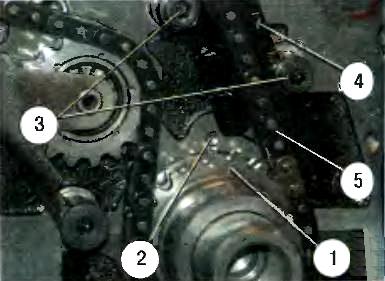 In this case, the piston of the 1st cylinder will take the TDC position.

Install the chain damper 4 without tightening the bolts 3 fastening the damper.

Put chain 5 on the crankshaft gear after lubricating it with engine oil. 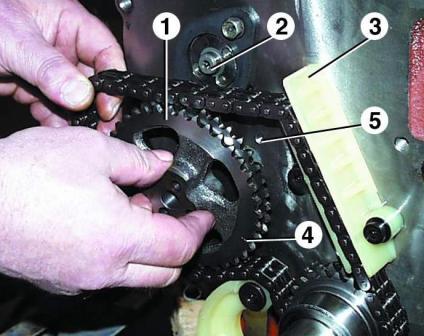 In this case, mark 4 on the gear must coincide with mark 5 on the cylinder block, and the chain branch passing through the damper 3 must be tensioned.

Install the countershaft drive gear so that its locating pin fits into the hole in the driven gear.

Install the two countershaft gear bolts with a lock plate underneath them. 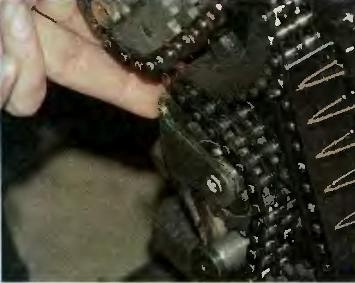 While pressing the tensioner lever, tighten the chain and check the alignment of the marks on the gears and the cylinder block. 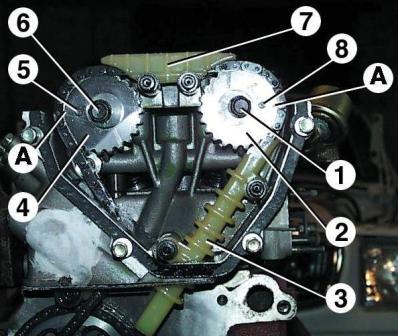 Place the chain on gear 2 and turn the exhaust camshaft slightly clockwise to install gear 2 with the chain on it. Pin 8 of the camshaft must fit into the gear hole.

The intermediate and crankshafts must not rotate. Mark "A" must match the top surface of the cylinder head.

Remove bolt 6 and remove gear 4 from the intake camshaft. Put a chain on gear 4 and install gear 4 with chain on the camshaft by slightly turning the camshaft clockwise.

Camshaft pin 5 must fit into the gear hole. By slightly turning the camshaft counterclockwise, tension the chain.

The "A" mark on gear 4 must align with the top surface of the cylinder head. The rest of the shafts should not rotate.

Install the circuit cover and water pump . Apply a thin layer of sealant to the surfaces of the covers adjacent to the cylinder block and block head.

When installing the chain cover, be careful not to damage the crankshaft oil seal.

Install the crankshaft pulley bolt, then, engaging fifth gear and braking the car with the parking brake, tighten the bolt to 104–128 Nm (10.4–12.8 kgf m), while holding the crankshaft from turning.

When the ratchet is tightened, the pulley is pressed onto the crankshaft.

Crank the crankshaft two turns by the ratchet and set the piston of the 1st cylinder to the TDC position (see operation 3). Check if the tags match.

Install the front cover of the cylinder head, first apply a layer of sealant to the surface of the cover adjacent to the block head.

Connect the crankcase ventilation hose and tube to the fittings on the valve cover, and the wires to the ignition coils. Put the tips of the high-voltage wires on the spark plugs.