Diagram and general description of the GAZ-2705 cooling system

The tightness of the cooling system allows the engine to operate at a coolant temperature exceeding 100º C, but if the coolant overheat warning lamp lights up (above 105º C), the engine must be stopped and the cause of overheating eliminated. 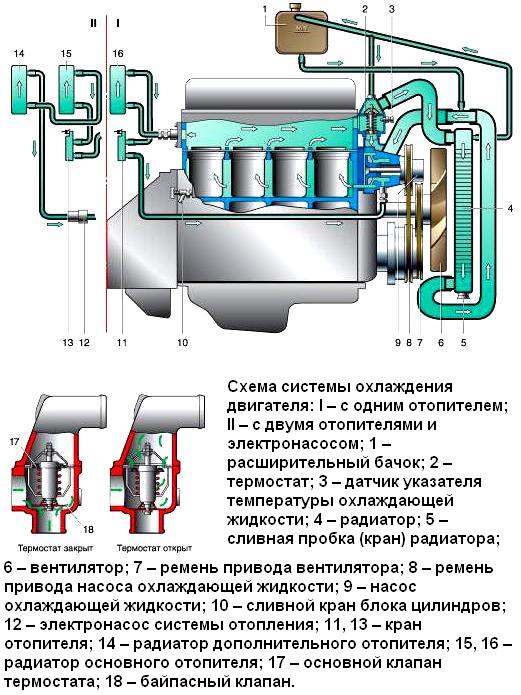 The cooling system consists of an engine cooling jacket, a radiator, a water pump, a thermostat, an expansion tank and connecting hoses and pipes.

The heater core is also connected to the cooling system. The pressure in the system creates a water pump, which is driven by a belt from the crankshaft.

From the pump, liquid is supplied to the engine cooling jacket. From the shirt, the liquid enters the thermostat.

On vehicles with ZMZ-402 or ZMZ-4021 engines, the fan is driven by a belt from the engine crankshaft.

The cooling system is filled with Tosol-A4OM coolant.

It is not recommended to fill the cooling system with water, as antifreeze contains anticorrosive and antifoaming additives, as well as additives that prevent scale deposits.

The coolant level in the expansion tank on a cold engine should be at or above the MIN mark by 20 - 40 mm.

If necessary, add coolant to the expansion tank. In case of frequent topping up, check the tightness of the system.

In case of a significant leakage of liquid, the use of water is allowed in exceptional cases to restore the level.

This will inevitably reduce the density of the mixture and increase its freezing point. Therefore, the mixture should be replaced with fresh coolant as soon as possible.