The air supply system thoroughly cleans it from dust and distributes it among the cylinders. Mixing of fuel with air takes place inside the cylinder.

Depending on the conditions of use, the following grades of diesel fuel are established in accordance with GOST 305-82: L (summer), 3 (winter) and A (arctic). Their choice depends on the season and climatic conditions in the area of ​​application.

Fuel L is used at an air temperature of 0 °C and above;

The pour point of winter fuel corresponds to the last digit in its designation.

Summer fuel is more viscous, at negative temperatures paraffin is released in it in the form of flakes, and at 10 ° C it loses fluidity.

The last digit in the designation of summer diesel fuel characterizes the flash point.

The sulfur content of fuel characterizes its corrosive properties.

Thus, the fuels of the second subgroup contain about twice as much sulfur.

For KamAZ engines, fuels of both subgroups can be used, since they use engine oil with an additive that reduces the harmful effects of sulfur.

One of the important indicators characterizing diesel fuel is flammability.

The fuel injected into the cylinder does not start burning immediately, but after a certain time, called the ignition delay period.

The longer the delay, the more fuel accumulates by the time of ignition and the faster the pressure in the cylinder subsequently builds up. This leads to shock loads on the parts and is accompanied by metal knocks (“hard” work).

The degree of "rigidity" of the diesel engine depends on the igniter properties of the fuel and is characterized by the cetane number. The larger it is, the shorter the self-ignition delay period, the easier it is to start the engine and the “softer” its operation.

Diesel fuels L, 3 and A have cetane numbers of at least 45.

Formation and combustion of fuel

The formation of the working mixture begins from the moment a dose of fuel is injected into the combustion chamber.

The combustion chamber (Fig. 1.) is limited by the piston crown and the inner surface of the cylinder head.

Such combustion chambers are called undivided. The main volume of the chamber is concentrated in the recess of the piston bottom, which has a cone-shaped protrusion (displacer) in the central part.

When the piston approaches top dead center (TDC) in the compression stroke, air from the cylinder is forced into the combustion chamber, creating vortex flows during movement that contribute to better mixture formation. 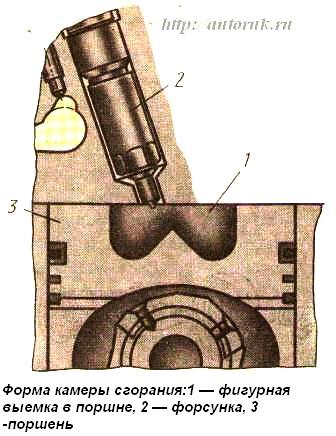 By the time the fuel injection starts, this chamber contains air compressed to 4...4.5 MPa and heated (from compression and the hot chamber wall) to a temperature of 620...700 °C.

In order for the fuel to penetrate such a compressed medium, it is injected under a high pressure of 24 MPa.

This allows you to get a fine atomization of the fuel and good mixing of it with air.

A feature of a diesel engine is that the same amount of air actually enters the cylinder, regardless of the load.

At low load, excess air is formed in the cylinder and the fuel burns completely.

When the load increases, the fuel supply increases and its combustion worsens.

The ignition delay period affects the behavior of the engine. It depends both on the properties of the fuel itself, and on the temperature in the combustion chamber and the injection advance angle.

Too large injection advance angle leads to an increase in the ignition delay period and "hard" engine operation, since in this case the start of injection occurs at relatively low temperatures in the cylinder re.

A small advance angle contributes to the combustion of fuel in the expansion stroke, which worsens the temperature regime of the engine, causing it to overheat.

For a non-working KamAZ engine, the injection advance angle is 18 ° to c. m. t.

When the engine is running, as the crankshaft speed increases, the pressure and temperature at the end of the compression stroke increase, so the conditions for mixture formation and combustion change.

The duration of the combustion process increases and in this case it is advisable to increase the injection advance angle.

The increase in the angle is carried out automatically by the injection advance clutch, which acts on the high pressure fuel pump when a certain engine speed is reached. 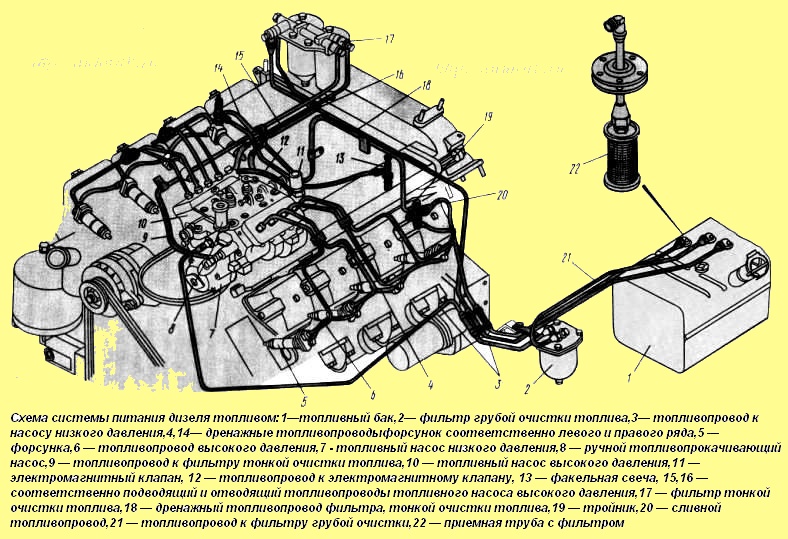 Scheme of the KamAZ diesel power system is shown in Fig. 2.

Fuel is contained in tank 1, which is connected by a suction fuel line through a coarse filter 2 to a low pressure fuel pump 7.

When the engine is running, a vacuum is created in the suction line, as a result of which the fuel passes through the coarse filter 2, is cleaned of large suspended particles and enters the pump 7, from which it is supplied to the fine filter 17 under slight pressure through the fuel line 9.

Next, the purified fuel enters the high-pressure fuel pump 10, from the channels of which part of the fuel is pumped to the injectors 5 and injected into the cylinders through them.

Another part of the fuel is discharged to the tank through the bypass valve.

Due to the operation of the bypass valve, a pressure of 50 ... 110 kPa is constantly maintained in the pump channels.

To remove air that has entered the fuel system, the fine filter 17 is located above all other devices of this system and is equipped with a jet valve through which air, together with part of the fuel, is discharged through the fuel line 18 to the tank.

Through the same fuel line, fuel from the high-pressure pump 10 is drained into the tank, which enters the fitting on the filter through the bypass valve and fuel line 16.

Fuel lines 4 and 14 are used to drain fuel that has leaked between the parts of the injectors into the tank.

The high pressure pump is driven by the engine crankshaft through an injection advance clutch that automatically changes the fuel injection timing when the engine speed changes.

The amount of fuel supplied to the cylinders by the high-pressure fuel pump is set by the regulator, which automatically maintains the crankshaft speed set by the driver.

Manual fuel priming pump 8 serves to fill the low-pressure line with fuel when the engine is not running.

Fuel line 12 is connected to the low pressure line, through which fuel is supplied to the flare candles 13 through the open solenoid valve 11 when starting a cold engine using an electric torch device.

The fuel tanks used on the KamAZ vehicle have a capacity of 250 and 170 liters.

The tanks are mounted on brackets and fastened with clamps. The supporting brackets are bolted to the frame spars.

The fuel tank consists of a body, a filler neck and a retractable pipe with a strainer.

The filler is closed with a lid with a steam-air valve and sealed with a rubber gasket.

In order to reduce fuel agitation and increase the rigidity of the tank, vertical partitions with holes are welded inside it.

In the upper part of the tank, there is a rheostatic fuel gauge sensor and a tube through which excess fuel from the engine injectors drains.

Next to it there is a suction pipe, ending at the bottom with a mesh fuel pre-filter.

On KamAZ-4310 vehicles with two fuel tanks, a distribution valve is installed on the intake pipe of the left tank.

The same valve is installed on the pipe into which excess fuel that is not used in the high pressure pump is drained.